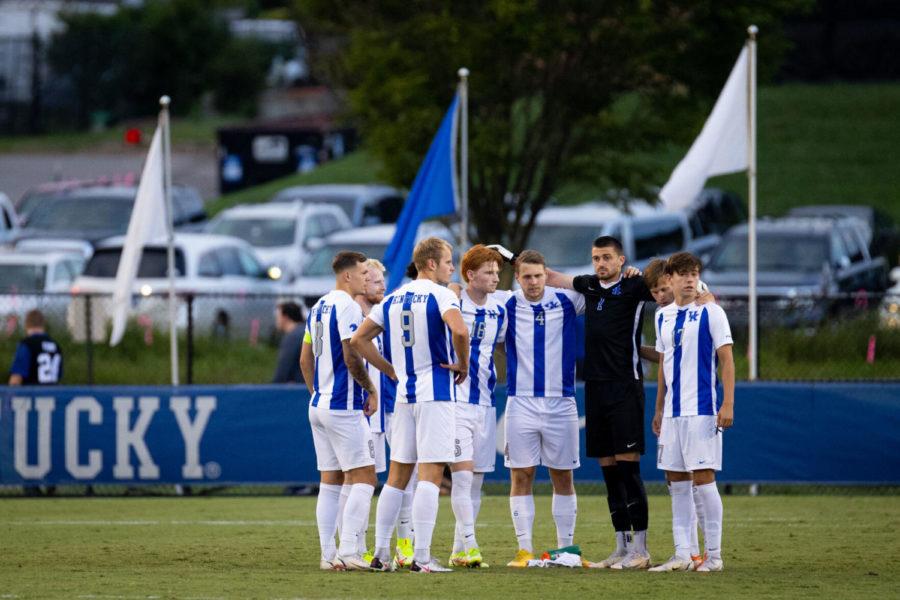 Kentucky huddles up before the University of Kentucky vs. Notre Dame men's soccer game on Friday, Sept. 3, 2021, at the Bell Soccer Complex in Lexington, Kentucky. UK won 1-0. Photo by Michael Clubb | Staff

No. 9 Kentucky men’s soccer fell short on the road against No. 8 Clemson, falling 2-1 and ending their season in the Sweet 16.

The Wildcats were able to find the net late in the second half but allowed the game-winning goal with just one minute left, sealing their fate.

Kentucky outshot Clemson 11-5 in overall attempts but were outdone 4-3 in shots on target; both goalies recorded two saves in the match.

The Cats committed 14 fouls to Clemson’s eight, though the Tigers received more yellow cards than UK.

Starting the match, Kentucky shot first with senior captain Bailey Rouse quickly putting up two attempts within the first 9’, both missing the mark.

The response by Clemson was much more dire, as the Tigers’ Callum Johnson got one past UK’s Jan Hoffelner in the 14’, when the goalie appeared to stumble on the save attempt. Johnson was assisted by Ousmane Sylla and Oskar Agren on the play.

Kentucky was not deterred, continuing to put up shot attempts after the goal allowed, though the team entered the halfway break without recording a shot on target.

The Wildcats trailed at the break for just the second time all season. UK had quadruple the amount of fouls as Clemson in the first half, though both had received just one card.

Despite Kentucky leading in shots attempted, the team had been without a single clear opportunity for the first 45’.

In the second half, Kentucky once again attempted to strike first, with Enzo Mauriz putting up the first shot on target for the Cats early in the half, but the shot would be saved by Clemson goalie George Marks.

The attempt would be the only shot on goal for Kentucky for quite some time, as it failed to record another for the next 30’.

With the season on the line, Kentucky pushed forward and eventually found its next shot on goal, which would turn out to be a big one, as Lucca Rodrigues knocked it past Marks with a header for the Wildcat equalizer in the 85’.

“We haven’t been chasing that much [this season],” UK head coach Johan Cedergen said. “I think when you’re able to rotate as many guys [as we have] and keep fresh legs on [the pitch], eventually you’re gonna find some open chances and we definitely found some of those today. I think it really shows the character of the group and that they’re willing to do their part.”

Momentum appeared to be on the Wildcats’ side as they quickly put up another shot on target which was saved, but the Clemson recovery spelled disaster for Kentucky.

With barely over one minute left to play, Alvaro Gomez scored the game-winner for the Tigers off an assist by Justin Malou.

Kentucky was able to set up a corner kick with one final attempt to tie, but it was defended by Clemson, who swiftly kicked the ball to midfield and won the match for the Tigers.

“You could see it on the players’ and staff’s faces, we were shell shocked,” Cedergren said. “We had worked so hard to fight our way back into the game with that little time left. Unfortunately for our guys in a knockout tournament, at some point it has to end even if we didn’t want it to. I just told the guys coming back that I loved them and told the guys that have to move on that I’m happy to do whatever I can for them in the future because those guys really gave everything for this team.”

The loss ends Kentucky’s historic season just one round short of the Elite Eight, which the Cats reached for the only time in program history in 2018. The Wildcats graduate 13 seniors this season, including Hoffelner and Rouse.

Despite the loss, the appearance marked the third time in four seasons Kentucky has appeared in the Sweet 16, a testament to the program built by Cedergren in his 10 years as head coach.

“I think we’ve raised the bar,” Cedergen said. “We’ve gotten three Sweet 16 [appearances] and two conference titles. Now it’s just about getting to a place like this and getting a result. I think we did more than enough to get a result today, though, and had this game been at home I think it would’ve been a lot different.”

With its win, Clemson will go on to face No. 1 Oregon State. The Men’s Soccer National Championship continues on, with the Elite Eight kicking off Dec. 3.