No. 9 Kentucky power past Santa Clara 2-0; advance to NCAA Tournament Round of 16 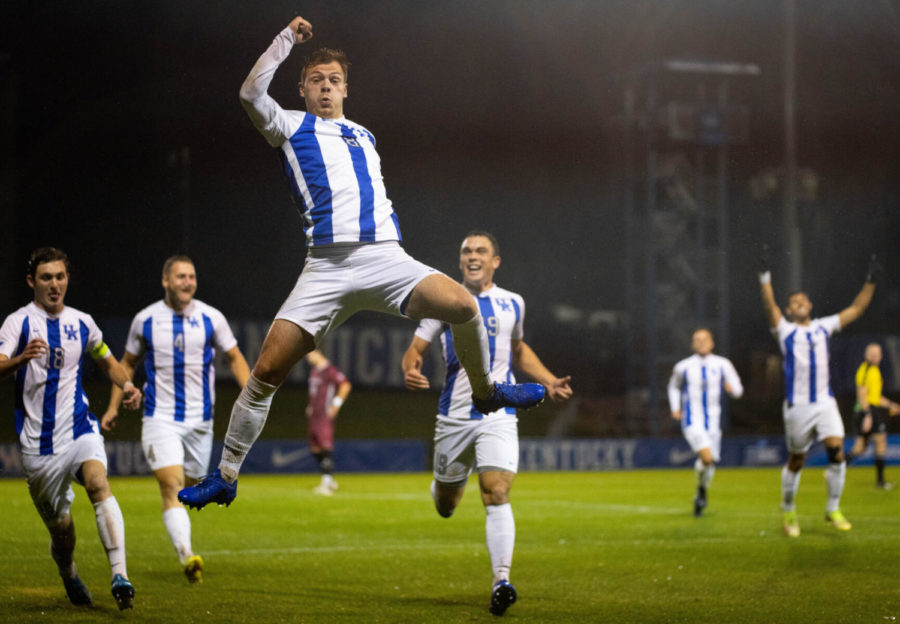 Kentucky Wildcats midfielder Marcel Meinzer (8) celebrates scoring a goal during the UK vs. Santa Clara men’s soccer game in the second round of the NCAA Tournament on Sunday, Nov. 21, 2021, at the Wendell and Vickie Bell Soccer Complex in Lexington, Kentucky. UK won 2-0. Photo by Michael Clubb | Staff

No. 9 Kentucky men’s soccer powered past Santa Clara 2-0 at The Bell in the second round of the NCAA Men’s Soccer Championship.

The win marks the 12th shutout of the season for Kentucky goalie Jan Hoffelner. Hoffelner did not record any saves in the win as the Wildcats prevented even a single shot on target by the Broncos. The Cats ultimately recorded four shots on target, outshooting Santa Clara 12-4 in overall shot attempts.

“I thought we were really sharp defensively,” UK head coach Johan Cedergren said after the win. “I couldn’t be any more proud of the guys.”

Both goals for the Wildcats came in the first ten minutes of the match on back-to-back corner kicks. Mason Visconti was credited with both assists having taken both corners.

Lightning struck once again in the 10’, when Marcel Meinzer scored the second goal in nearly an identical situation to Rodrigues.

“They’re a lot bigger than us,” Santa Clara head coach Cameron Roast said about the corner kick goals. “They’re taller and also in weight they’re just bigger guys. When they pack the box like they do it just doesn’t allow for good movement from our goalkeeper. Credit to Kentucky, they played a smart game and were able to take advantage.”

The two early goals would ultimately be the only scores of the match, despite a hot start from Santa Clara in the second half.

“Notoriously they start really well in the second half,” Kentucky senior captain Bailey Rouse said. “It was a big point of emphasis for us to make sure we start out the right way and match their intensity. I think [the team] is doing a great job taking information from the coaches and applying it to the game.”

The Wildcats had a week of rest before the game as a result of the first round bye granted to them as the No. 9 team in the tournament. The Broncos, on the other hand, beat Akron in overtime on Nov. 18, making Sunday’s match their second in three days.

“We felt [the quick turnaround] in 2019, having to play two games in quick succession,” Rouse mentioned. “We knew [going into the game] that their bodies were going to be worn down from travelling all the way from California [and we took advantage of that].”

With the win over Santa Clara, the Wildcats advance to the round of 16. They will travel to South Carolina to play No. 8 Clemson next weekend.

The match against Clemson is set to kickoff at 7 p.m. next Sunday, Nov. 28 and will be watchable on ESPN+.

“So excited for us to be here and to have Thanksgiving with these guys,” Coach Cedergren said. “We’ll start preparing for [Clemson] soon, but really it’s just this group and these guys that are gelling at the right time. I’m proud of them and I’m excited to work with them for at least another week.”