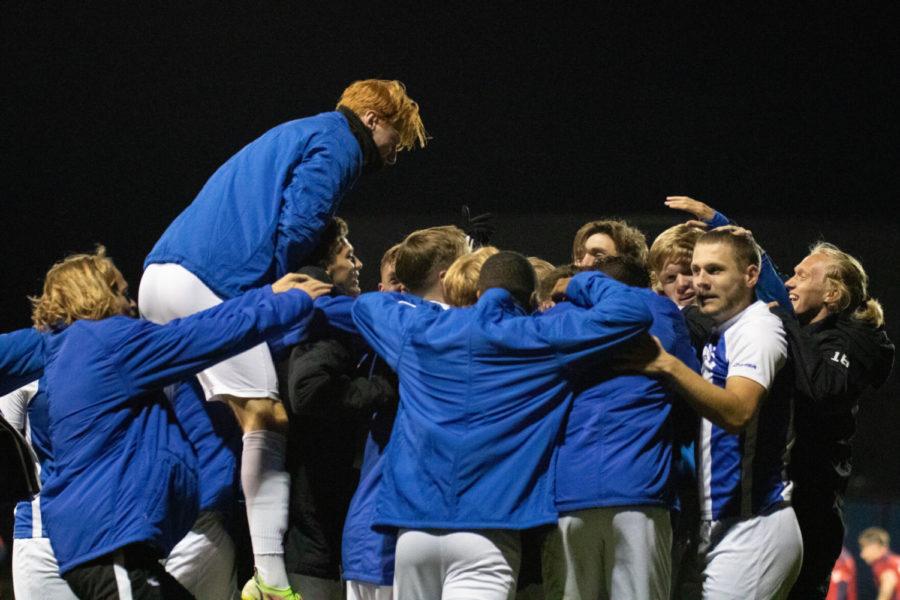 Kentucky men’s soccer defeated the top-seeded FIU Panthers in the semi-finals of the Conference-USA tournament, winning 3-0 in regulation.

The win marked the first time this season the Wildcats recorded a three-goal second half, continuing their streak of three-goal-matches to three.

The Wildcats shut down FIU, after a scoreless first half. The Kentucky defense dominated the Panthers, not allowing FIU to record a single second half shot attempt until the 78’ of play.

By the final whistle, Kentucky outshot the Panthers 10-6 in attempts, and 4-1 in shots on target. Kentucky goalie Jan Hoffelner once again played a perfect game, saving the only shot on goal for FIU in the first half.

Kentucky entered the game off of their 3-1 first-round victory over the Coastal Carolina Chanticleers. The Wildcats scored in the second minute of play and never surrendered the lead.

UK would shoot first in the game in the 10’, recording the only shot of the first 15’, but it missed wide right.

Both teams finished the first half with just two shot attempts each, with FIU recording their lone shot on target of the game in the 41’, though it would be saved by Hoffelner.

Coming out of the break, it was Kentucky who had the momentum in their favor, as Saint Mary’s transfer Luke Andrews was able to get one past FIU goalie Tyler Hogan in the 54’ off an assist by Nick Gutmann.

The goal made Andrews the leading scorer for the Wildcatsthis season.

The Wildcats held their lead through the 68’ when play was stopped for a card after FIU’s Philip Hildebrandt took down Wildcat Marcel Meinzer. Choice words with FIU’s bench led to Kentucky’s Bailey Rouse being shown yellow, but the punishment was more severe for Hildebrandt as he was shown red, knocking the Panthers down a man and removing him from the match.

The loss of a defender would prove costly for the Panthers in the 75’ when Daniel Evans was able to get a wide open look on the net, scoring the second goal of the night for the Wildcats. Gutmann and Enzo Mauriz were both credited with an assist for the goal.

Evans was not satisfied with just the one goal, as he scored again just one minute later to give the Wildcats a three-goal cushion.The goal tied Evans with Andrews as the leading scorer for the Wildcats, and also tied the team record for most goals by a single athlete in one game this season.

FIU was once again able to start putting up shot attempts after being shut down prior, but none were able to find the target. Kentucky did not allow a single shot on goal in the second half. The dominant defensive display prevented any FIU rally as the 90’ soon came to an end, 3-0 in favor of Kentucky.

The Wildcats return to play this Sunday, Nov. 14, to battle for the conference’s auto-bid to the NCAA Tournament in the Conference USA Championship Game. They will play the Florida Atlantic Owls. The current kickoff time for the championship game is 1 p.m. and can be viewed on ESPN+.