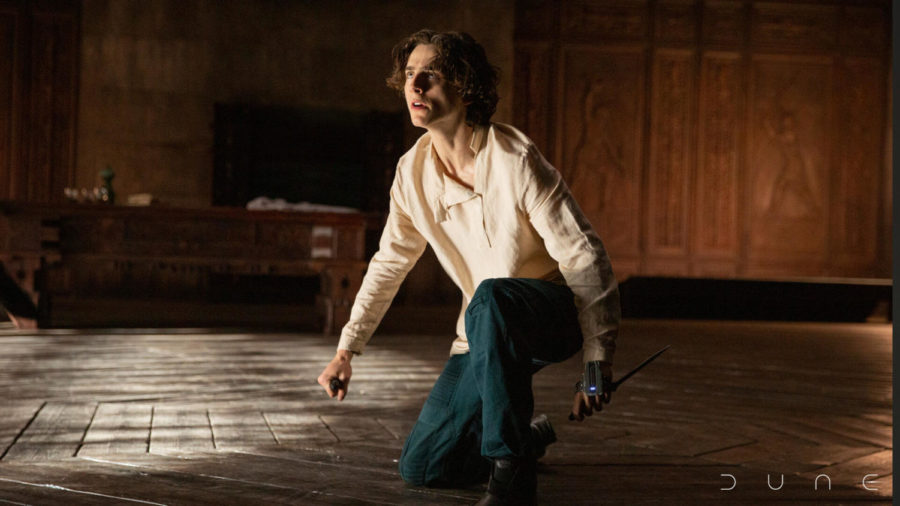 Despite heavy delays due to the pandemic, the 2021 film adaptation of Frank Herbert’s “Dune” has arrived. There’s no time to waste, and fear is the mind-killer.

Denis Villeneuve’s “Dune” is the second film adaptation of Herbert’s novels. Unlike David Lynch’s 1984 adaptation, this film is split into two parts, so judging it by the story is difficult. It also faces the hurdle of being both an adaptation of a legendary sci-fi series and the remake of Lynch’s cult-classic.

Arrakis is home to a desert-dwelling people called the Fremen, who worship the psychoactive agent known as Spice. However, Spice is also a vital component for use in interstellar travel.

One of the first things you notice in the 2021 film is its distinct political angle; there are strong parallels between the plot of “Dune” and the War on Terror.

When the novel was written in 1965, as well as when the Lynch film was released in 1984, the idea of invading a desert-dwelling civilization to strip them of their resources wouldn’t hit close to home. However, current politics add a new interpretation of the plot.

In the 2021 version, the film clearly sides with the Fremen from the beginning. It’s made clear that the Fremen have been oppressed by the Harkonnen regime, to whom Arrakis only matters as a source of fuel. House Atreides, meanwhile, attempts to reason with the Fremen and make an alliance instead of wiping them out on sight.

Many movies prioritize actors and visual effects in their production, but “Dune” allows the cinematographers to shine. Unlike movies like “Lord of the Rings,” which use the verdant landscape to show off the beauty of the world, Arrakis is harsh from the beginning. Arrakis is a planet-wide desert, and the location shots in the United Arab Emirates and Jordan allow for breathtaking shots of the vast desert. The deserts of Arrakis are both brutal and beautiful.

The film’s score is equally as important, allowing the tension of dramatic yet slow scenes to be properly conveyed. The soundtrack is like Arrakis itself, intense yet sacred.

“Dune” (2021) airs closer to the original novels than Lynch’s version. Details that had been changed in the 1984 film are restored to their book-original form. One non-story example was casting Timothée Chalamet for the role of Paul Atreides. While Chalamet is 25, he looks more age-appropriate for the 14-year-old Paul Atreides than Kyle Maclachan from the Lynch film.

Thirty-seven years of advancement in special effects benefit this movie, allowing concepts like the Voice, shields and the sandworms to be better integrated in Villeneuve’s take. The film’s technology is visually distinct but identifiable in its purpose.

Lynch and Villenueve have distinct visual interpretations of the book. “Dune” (1984) was a brightly colored movie, with flashy effects for the time. It was also an intentionally ugly movie, with the designs for characters such as the Navigators and much of House Harkonnen being aesthetically horrific.

“Dune” (2021), meanwhile, aimed for a realistic take on Dune’s world — not “realistic” in the sense of the DC Extended Universe, where the colors are washed out and everything is grim, but rather an attempt to create what these devices would look like if they existed in our world. The winged airships (or “ornithopters”) of the 1984 film are blocky designs while the 2021 film uses a sleeker design resembling a modern military helicopter.

For example, the personal shields of the 1984 film are golden blocks that obscure most of the actors and are rarely used, while the 2021 film establishes them with a blue or red shimmer when the shield is activated, struck or broken. In spite of this, aspects created for Lynch’s Dune, such as the Baron’s antigravity apparatus and the way the Voice is conveyed, are retained in new ways.

“Dune” (2021) is a breath of fresh air compared to recent blockbusters such as those in Marvel Cinematic Universe, Star Wars or Mortal Kombat; unlike them, the film doesn’t feel the need to lighten the mood every few scenes. The film sets the stage for war early on, and the looming threat awaits behind every corner.

The newly-released “Dune” is available to stream on HBO Max and is still in theaters.