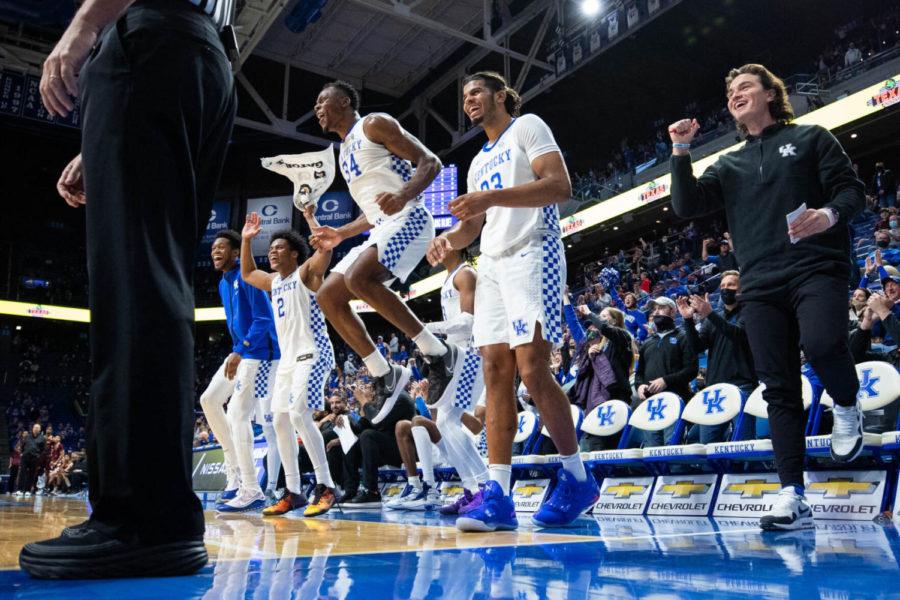 Long gone are the days of Kentucky Athletics being ruled solely on the hardwood.

While the legendary basketball program remains in the upper echelon of collegiate athletics, Lexington has witnessed the growth of multiple programs over the past couple of years, helping the University of Kentucky stack up against its Southeastern Conference cohorts.

This fall has seen multiple teams and athletes exceeding expectations and breaking program records, creating what is currently one of the more successful periods in Kentucky Athletics history.

Year nine under Mark Stoops has solidified Kentucky football into no longer being a bottom-feeder in the SEC.

The Wildcats began the season 6-0 for the first time in 71 years. Achieving an AP Top 25 ranking as high as No. 11, UK reached multiple milestones during the 2021 campaign.

A 20-13 win over then-No. 10 Florida marked the first time the Cats claimed victory over the Gators in Lexington in 35 seasons.

The next week saw the Wildcats vanquish LSU 42-21 for UK’s first win over the Tigers in 14 years.

Despite a three-game losing streak in the middle of the season, Stoops rallied his troops, powering through UK’s final three regular season opponents easily, ending with a 52-21 thrashing of rival Louisville for the Governor’s Cup.

The Wildcats now await to hear which bowl game they will be attending on New Year’s Day, as they will attempt to win 10 games for just the fourth time in program history.

Stoops will be sticking around for years to come in the Bluegrass, as the head coach and Kentucky recently agreed on a contract extension, keeping Stoops in Lexington through June 2028.

Kentucky men’s soccer etched its name into program history this season, finishing with a 15-2-4 record, which is tied for the fewest losses in a single season.

Head coach Johan Cedergren finished his tenth season at the helm, leading the Cats to their third Sweet 16 appearance in the NCAA Tournament in the last four years.

The No. 9 overall seed in the tournament, UK fell victim to a last-minute goal to Clemson, ending its historic season.

UK went unbeaten in its first 14 matches of the season and finished the year undefeated at the Wendell and Vickie Bell Soccer Complex, where the team went 9-0-2.

The women’s team did not find the same success, however. A 6-2-2 start to the year was quickly derailed by just one win in 10 SEC matches.

Star striker duo Jordyn Rhodes and Hannah Richardson combined for 19 of Kentucky’s 33 goals on the year.

Former head coach Ian Carry, who began the season as his fifth in charge of the team, was relieved of his duties in October.

After the Cats finished the season 7-10-2, UK hired Troy Fabiano as the new head coach in November. Fabiano takes over after spending seven seasons as head coach at Milwaukee.

Both the men’s and women’s golf teams secured two top five finishes in four tournament appearances in the fall.

Senior Garrett Wood paced the men’s team to a second place finish at the Steelwood Collegiate invitational in October, the team’s highest finish of the season. A 7-under-par third round helped Wood clinch second place individually in the tournament.

The highest finish for the women’s team came at the Mason Rudolph Championship, where Jensen Castle led the team to a fourth place finish. Castle, the 2021 U.S. Women’s Amateur champion, shot an 8-under-par 208 over three rounds, totaling the second best 54-hole score in program history.

Both teams will return to action in the spring.

After winning the 2020 National Championship, Kentucky volleyball is poised to make another run for glory as they hold the No. 7 overall seed in this year’s tournament.

Behind Alli Stumler and Madi Skinner, the Wildcats lost just one of 13 matches at Memorial Coliseum.

The SEC clinching sweep of Florida on Nov. 26 was win No. 400 for UK head coach Craig Skinner.

Kentucky’s journey to repeating as National Champions begins on Friday, Dec. 3, where the Cats will host Southeast Missouri State in round one at Memorial Coliseum in Lexington.

Not to be outdone, Kentucky men’s and women’s basketball are both poised for big seasons in 2021-22.

John Calipari is amidst season No. 13 at UK, where his team currently ranks ninth in the latest AP Top 25 poll.

Following a season-opening loss to Duke, the Cats have rattled off six consecutive victories. Behind Oscar Tshiebwe, the nation’s leading rebounder, Sahvir Wheeler, the nation’s leader in assists and TyTy Washington Jr, UK’s leading scorer, Kentucky has the core necessary to do big things come tournament time in March.

Howard and Dre’una Edwards are both averaging over 19 points per game through the Cats’ first five contests.

A 4-1 record and the No. 16 ranking have Elzy’s group on pace to contend in the SEC once again this season.