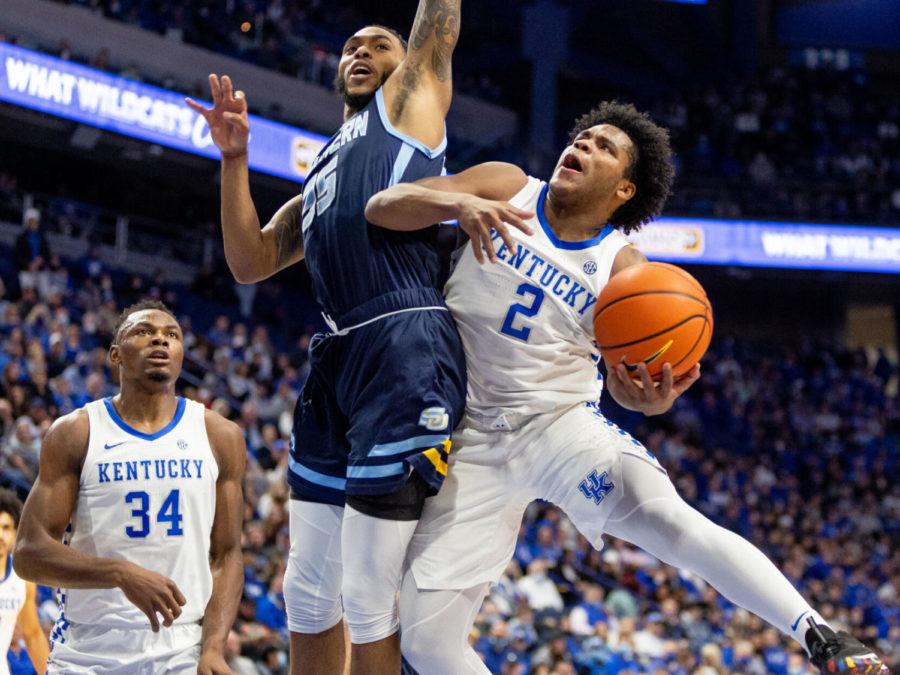 Kentucky was originally slated to duel No. 15 Ohio State, while North Carolina was supposed to battle No. 4 UCLA before both the Buckeyes and Bruins had to pull out due to COVID concerns.

The Wildcats entered the game looking for a bounce back opportunity after being upset 66-62 on the road against Notre Dame the week prior. It was the second loss of the season for Kentucky, which dropped them to 0-2 against top 100 KenPom teams.

“I’m glad it was North Carolina,” Calipari said. “We needed to go against a good team to figure out who we are. They’ve got size, they’ve got guard play, they just didn’t make shots today, just like us at Notre Dame.”

Though the entire team had a strong showing, leading by more than 30 points for much of the late second half, few shined near as bright as Georgia transfer Sahvir Wheeler.

Wheeler, who struggled in the Cats’ loss to Notre Dame, led all scorers with 26 points— just one short of his career high. Wheeler went 12-15 from the field and perfect from the line while also securing three rebounds, eight assists, and four steals in 32 minutes played, the most of any player for UK.

“Coach [Calipari] [told me] ‘Man, shoot shots you can make. Don’t worry about anything else, just shoot balls and play with confidence,’” Wheeler said. “I’m a confident kid and I hope people can tell I play for the big lights. This is why I came here, to play against the best and to be challenged every day in practice by my teammates, by my coaches, and play a tough schedule where you have to show up to win.”

The Wildcats were able to hold North Carolina to just 69 points, with the Tarheels going 1-13 from three while shooting 43-percent from the field.

Though Wheeler stole the show with his performance, Kentucky forward Oscar Tshiebwe also recorded a double-double in the win, his eighth of the season.

“I said I want to go out there and grab 20 rebounds,” Tshiebwe said. “Today I grabbed 12 [rebounds]. I just play for the team, and I’m enjoying what we’re doing right now. They’re not just letting me do all the work. I’m glad they’re helping me.”

Tshiebwe was unable to play for much of the first half, picking up his second foul early in the contest. Despite his absence, the team was able to smother the Tar Heels, jumping ahead by as many as 18 in the first half.

That number would grow to as much as 35 in the second half before ultimately finishing at 29. Kentucky led North Carolina for 38 minutes, while only trailing for 14 seconds.

The Wildcats return to play this Wednesday, Dec. 22, to battle their in-state rival the Louisville Cardinals in Rupp Arena. Tipoff is scheduled for 6 p.m. and will air on ESPN.