Hilltoppers toppled: No. 20 Kentucky race past WKU 95-60 behind Grady and Tshiebwe 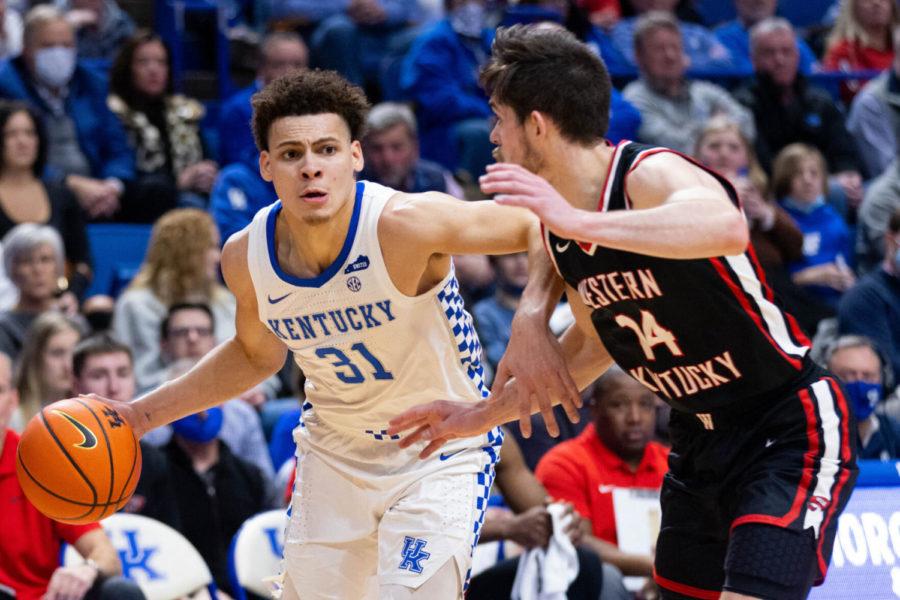 No. 20 Kentucky improved to 9-2 on the regular season on Wednesday night following a 95-60 thrashing of Western Kentucky inside Rupp Arena.

The win makes two in a row for the Wildcats after the loss to Notre Dame in South Bend.

A plethora of Cats led the way on Wednesday, headlined by Kellan Grady and Oscar Tshiebwe.

After an 18-point outing against North Carolina in Las Vegas, Grady set a new season-high with 23 points on 7-10 shooting. The Davidson transfer connected on six 3-pointers, doubling the Hilltoppers’ amount of makes from deep.

Oscar Tshiebwe recorded another double-double, scoring 14 points and hauling in a career-high 28 rebounds. Tshiebwe’s performance on the glass was a historic one, as his 28 boards set a new record for single-game rebounds inside Rupp Arena, breaking the record that was previously held by Shaquille O’Neal, while simultaneously out-rebounding WKU as a team.

TyTy Washington Jr was once again efficient, collecting 20 points on 9-13 shooting to go along with six assists and two rebounds.

The Hilltoppers waltzed into Rupp Arena with an 8-4 record, fresh off an 82-72 victory over Louisville.

Following the postponement of the game between UK and Louisville, the Hilltoppers stepped up to the plate on short notice, traveling to Lexington to take on the Cats.

Rated in the top 100 via KenPom, WKU brought a unique set of challenges to Rupp Arena in an attempt to defeat UK.

Jamarion Sharp, WKU’s star big man who towers over his competition at seven-foot-five, made his presence felt immediately. The junior recorded eight points, seven blocks and six rebounds in 24 minutes.

Midway through the second half, Sharp landed awkwardly on his left ankle, prompting him to head to the locker room for the remainder of the game.

Jairus Hamilton, WKU’s leading scorer, was held to just seven points on 2-6 shooting. The Wildcats forced the senior to commit five turnovers and three fouls, holding Hamilton to just 19 minutes on the court.

Josh Anderson led the Hilltoppers in scoring with 18 points.

The first half was filled with fast-paced, back-and-forth action, led by the Wildcats. 21 combined first half points from Grady and Washington helped UK garner a lead as big as 16.

The Hilltoppers struggled shooting from deep in the first half, knocking down just one of nine shots from behind the arch.

Half No. 2 saw the complete takeover by Tshiebwe, as the West Virginia transfer raked in 17 boards, five of which came on the offensive glass. Tshiebwe had Big Blue Nation in the palm of his hand, as the crowd roared after each rebound he was able to reel in.

Grady would knock down three more 3-pointers, Washington scored 11 points and Jacob Toppin added eight points of his own as the Wildcats stormed past WKU in the second half.

As a team, Kentucky shot 55.9 percent, including 45 percent from downtown, while holding WKU to just 32.8 percent from the floor, allowing only three 3-pointers.

The win will leave a good taste in the mouth of Kentucky and BBN as the holidays approach. The Cats won’t return until Dec. 29, where they will host the struggling Missouri Tigers inside Rupp Arena to kick-off SEC play. That game is scheduled to tip-off at 7 p.m. E.T.