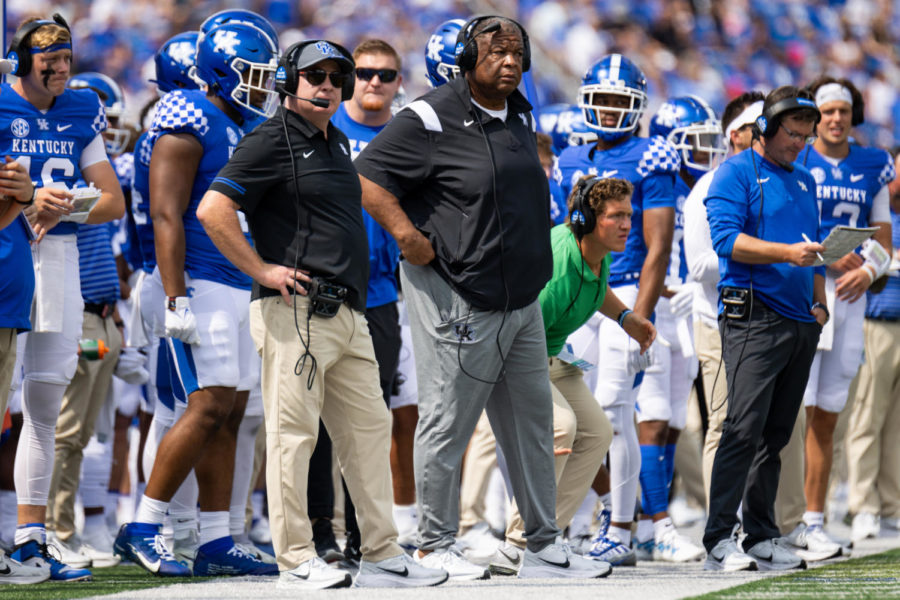 Kentucky football released its 2023 football season on Tuesday, detailing the home and away matchups the Wildcats will take on next season.

The Cats start the year like any year, at home in Kroger Field, taking on a Mid-American Conference opponent in Ball State on Sept. 2.

Kentucky then hosts FCS in-state rival Eastern Kentucky on Sept. 9 before hosting Akron in the first part of a three-game scheduling contract on Sept. 16.

While Kentucky doesn’t look to be tested much in the first four weeks, it may be to the benefit of the program assuming starting quarterback Will Levis doesn’t return as a graduate student which, based on his current projections in the NFL Draft, is unlikely.

Possibly bringing in a new transfer quarterback if backups Deuce Hogan and Kaiya Sheron don’t earn the job, Kentucky will have a lot to figure out entering the new year.

Levis would be far from the only loss as well, with both starting and second string running backs Chris Rodriguez Jr. and Kavosiey Smoke currently being seniors, along with transfer wide receiver Tayvion Robinson.

That, in and of itself, is only looking at graduating classes and not even touching on which athletes may or may not have opportunities to play in the NFL.

With all that being said, four relatively easy games may be a must for Mark Stoops in his 10th year at the helm of UK.
The Wildcats have only faced Ball State and Akron once in the history of all programs, with UK winning 28-20 over the Cardinals in 2001, and 47-10 over the Zips in 2010.

As for Eastern Kentucky, the Wildcats have hosted the Colonels twice since 2013, the first year under Stoops, winning both times by a combined score of 61-43, with both games being decided by less than two touchdowns.

Looking at Vanderbilt, the Wildcats currently boast a six game win streak over the Commodores, most recently winning 34-17 in Nashville in 2021, with the 2022 edition of the matchup yet to take place.

Vanderbilt, like several others on the schedule, are mainstays on UK’s schedule, alternating home and away every season.
Following Vanderbilt, Kentucky has its first test in week five, hosting the Florida Gators on Sept. 30.

While Florida will likely be in its second year under head coach Billy Napier, and Kentucky got the better of the former Ragin’ Cajuns coach 26-16 in Gainesville, Florida, this season, the Gators always stand as a big matchup on every schedule, also alternating home and away every year.

While UK’s 2022 victory was significant in marking the first time since 1977 that the Cats had recorded back-to-back victories over the Gators, Kentucky hasn’t had a longer win streak over Florida since 1951.

Further on that point, in the history of both programs, both of whom have faced off 73 times, Kentucky has only had a win streak of three or more twice.

On Oct. 7 Kentucky’s schedule only gets harder, traveling to Athens to duel the Georgia Bulldogs.

The Bulldogs currently boast a 12-game win streak over Kentucky, though they have yet to face off in 2022, with the Cats winless in Athens since 2009, only having won on the road over Georgia four times in 73 matches.

Returning home on Oct. 14, Kentucky hosts the Missouri Tigers, of whom the Cats hold the overall series 8-4 with only one home loss to “Mizzou.”

Having a bye week on Oct. 21, the Cats return to action on Oct. 28 when they host Tennessee, whom they haven’t beaten at home since 2017, with the matchups always sure to pack the home stadium with vitriol.

Next, on Nov. 4, Kentucky travels to Starkville to battle the Mississippi State Bulldogs.

While the 2022 edition of the matchup has yet to take place, the 2023 edition may spell doom for Kentucky with the home team winning the match every game seven years in a row at the time of writing, with Kentucky looking to make it eight in a row this season.

Following the road trip comes the headline grabber of the season as the Alabama Crimson Tide travel to Lexington, Kentucky for the first time since 2013.

Currently under head coach Nick Saban, Alabama have won six national championships under him, and are often regarded as one of the best dynasties in all of American sports.

The matchup also has another significance with Alabama being the school in which Bear Bryant made much of his success after coaching at Kentucky, with Stoops surpassing Bryant’s record for all-time wins at Kentucky just this year.
Alabama has not lost to Kentucky since 1997, only losing 25 total games under Saban in 16 seasons, a win percentage of 88%.
Taking away postseason bowl game and playoff results, the figure moves to a 90% win percentage for the Crimson Tide under Saban.

Following the enormous matchup against Alabama, Kentucky finishes the season with a two-game road trip.

First, traveling to Colombia, South Carolina, the Cats face off against USC, a venue it has won in six times, most recently in 2021.

Finally, in the only annual home and away series with a non-conference opponent, Kentucky travel to face in-state rivals Louisville in the Governor’s Cup matchup.

The Kentucky-Louisville rivalry is often regarded as one of the best in college sports alongside other bitter in-state feuds like North Carolina-Duke, Indiana-Purdue and USC-UCLA.

Though the pair has yet to face off in 2022, Kentucky currently boasts a three-game win streak over the Cardinals, holding on to the Governor’s Cup trophy that it displays right next two its two Citrus Bowl Trophies in the Joe Craft Football Training Facility.

While the hype train has already left the station for the 2023 football season, the 2022 season continues with the Cats set to host Northern Illinois to round out its non-Louisville non-conference schedule this Saturday, Sept. 24.