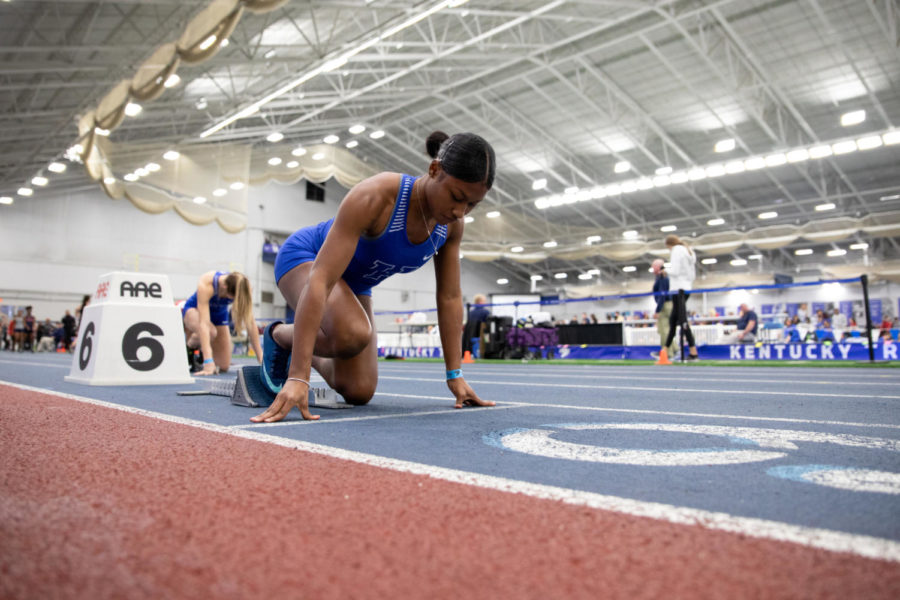 A University of Kentucky track and field athlete gets ready for a race during the Jim Green Invitational at the Nutter Field House on Saturday, January 12, 2019, in Lexington, Kentucky. Photo by Michael Clubb | Kentucky Kernel

UK athletics released a press release regarding the naming of a new track and field facility on Friday, Sept. 16, deciding on the Jim Green Indoor Track and Field Center.

The name of the facility was approved at the UK Board of Trustees Meeting, which took place the same day.

The facility was named in honor of Jim Green, the first African American student-athlete at Kentucky to win NCAA and SEC Championships.

“I am elated! It is a great honor and so very exciting – to have your name attached to something like this is special,” Green told UK Athletics after the decision. “I want to thank the university for everything they have done for me.”

Upon the facility’s naming, Derrick K. Ramsey, board of trustee member and former Kentucky quarterback and professional football player, spoke on the progress that UK has made for racial equality since his time as a Wildcat.

“I had the chance to speak with my old friend Jim Green,” Ramsey said. “More than 50 years ago Jim attended this great university. During that time, it was not only tough on the track, but it was equally as tough walking on this campus as an African American male. And so, it is with great pride [that] here we are 50 years later that he is being recognized for his greatness. It’s our second naming of an African American on this campus, so I just wanted to say that it doesn’t go unnoticed. Yes, there are trying times, but things are getting better. I would have just been remiss if I didn’t comment about the naming of that facility behind the great Jim Green.”

The new facility will give the track & field, as well as the cross country, athletes additional resources to improve their training regiment, and will be located next to the UK Outdoor Track.

The prominent contributors to this project are Joe and Kelly Craft, who pledged $7.5 million dollars as a gift to be applied to the facility, as well as the renovation of the current indoor track and soon to be football-specific indoor practice facility Nutter Field House.

The monetary donation was not the only thing the Crafts provided to the facility, with the name also having been recommended by the donors.

“I am thankful it has come to fruition and equally excited about how the Crafts have asked us to recognize this gift in honor of Jim,” UK athletic director Mitch Barnhart said. “The gift also underscores the Crafts’ commitment to our football program while supporting the 100 students who compete in track and field.”