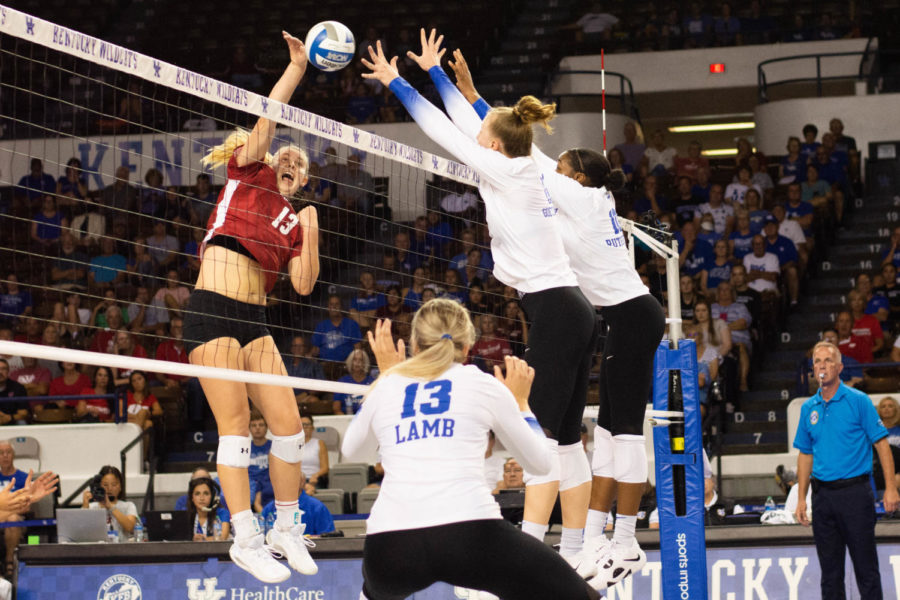 No. 13 Kentucky was swept by No. 2 Nebraska 3-0 on Sunday, bringing its record to 5-4 on the season with all four losses coming from ranked opponents.

The loss followed an up-and-down weekend that saw a tough defeat to No. 3 Louisville despite Adanna Rollins’ 19 kills against the Cardinals, and a bounce back sweep over Indiana State.

Facing a meat grinder of a schedule, Kentucky’s match against Nebraska would be its third against top-four teams, all of whom made the final four in the NCAA Tournament last season, since Sept. 9.

The Cats’ desire for a statement victory was apparent from the first set with Rollins, Reagan Rutherford and Erin Lamb racking up four kills each.

Despite the effort, the match remained neck-and-neck for the entirety of the set, but a few attacking errors made by Kentucky allowed Nebraska to secure the set point 27-25 in the end.

Entering the second set, the Cats struggled to find their groove against the Cornhuskers and trailed behind early on.

A timeout called by head coach Craig Skinner at 15-13 hoped to change the pace of the set, however despite a 3-0 scoring run by the Cats seeming to ignite the momentum, the height of Nebraska’s defense at the net continued to hold strong Kentucky.

Ultimately, the set ended 25-20 in favor of Nebraska victory once again, leaving the Cats just one set away from defeat.

Kentucky once again began trailing behind in the third set and, despite Rutherford and Rollins leading in kills, were continuously unable to close the gap.

Nebraska would go on to breeze through the set with a final score of 25-16, securing the third set win of the day, leaving the court with the victory over the Cats.

“We have to discipline ourselves mentally to be engaged right there at the moment,” Skinner said after the game. “We’re communicating through it, but it didn’t seem like we were present at some of those points.”

Rutherford, who ended the match with nine kills, echoed what Skinner said about the team’s performance.

“I think we’ve just had a tough road so far,” she said. “There’s a lot that we’ve learned from all these losses.”

Kentucky will stay at home this week to prepare for its next match up against LSU to start SEC play on Saturday, Sept. 24, at 4 p.m. EST, with the game airing live on the SEC Network+.