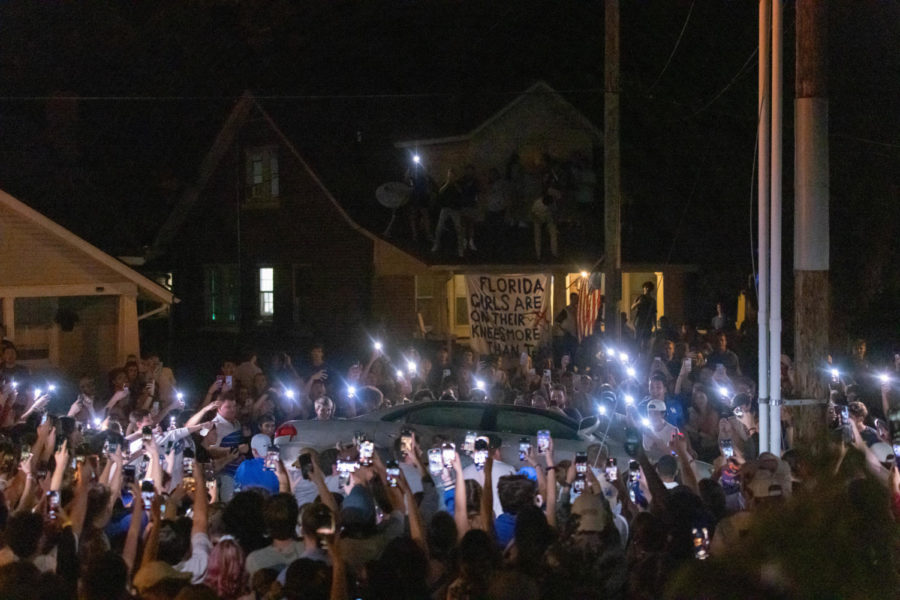 UK students and fans rushed State Street the night of Sept. 10, after Kentucky football’s 26-16 win over the University of Florida.

The fiery celebration involved UK students and fans burning couches and other household furniture, in addition to flipping and standing on a car owned by Zach Preston, a UK student.

“I walked out of State Street right here, I saw the couches burning, and then five minutes later my car was on top of itself,” Preston said. “I watched it get flipped, I was telling people to stop – man, they just didn’t stop.”

On Sunday, Preston’s parents set up a GoFundMe page to help replace the vehicle; as of 7:30 p.m. Wednesday, 94 donors raised over $5,547 of the $5,000 goal. According to the GoFundMe page’s description, the student was “physically attacked when he tried to stop the mob” from flipping his car.

The last time a car was flipped during the event was in 2018 after UK defeated Florida for the first time since 1986.

Twitter user @JonWils92557420 commented, “The owner of the car that was flipped is out of luck because they can’t afford to fix? C’mon, folks. ‘Boys being boys’ still need consequences for illegal actions, regardless of their race.”

Lexington police and firefighters monitored the event, calming it down and extinguishing the fire around 11:15 p.m.

“Detectives from the Property Crimes Section are reviewing video footage and are working to identify the involved parties, and criminal charges are expected,” according to the Lexington Police Department.

UK student Adam Bliburg said he wasn’t expecting the win at all, let alone to see an event of students and fans gathered in the street burning furniture.

For some, the standing tradition has continued and become something they expect during the football season.

UK junior Kelli Kost said she and her roommates were emailed by their landlord to take everything off their porch last year in the possibility of the event happening even while living on Waller Avenue. Kost said they were not notified for this game.

However, the university sent out a text alert Saturday at 5:43 p.m. telling students to “Have fun, be smart & safe, look out for one another.” The message also referenced and linked the university-provided service Wildcab if needed.

Despite not having a warning, Kost said she enjoys the tradition – something she won’t experience outside of college.

“I think it’s a unique tradition that other schools don’t do, which is always fun,” Kost said.