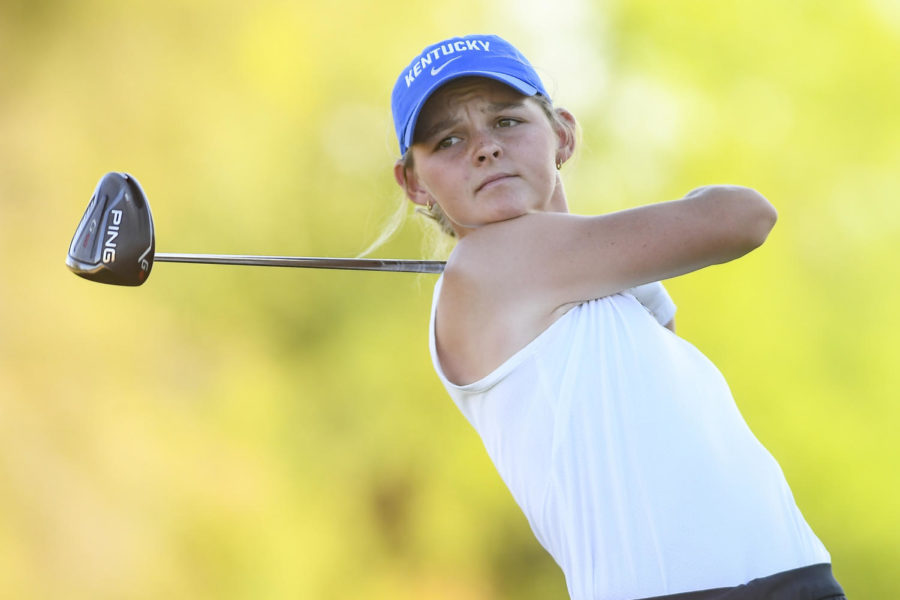 Kentucky womens golfer Laney Frye competes in the third round of the NCAA Championship finals at Grayhawk Golf Club in Scottsdale, Arizona. Photo by Tim Cowie, provided by UK Athletics

The Kentucky womens golf team kicked off its 2022-2023 season in the Cougar Classic in Hanahan, South Carolina on Monday.

The two-day event finished up on Tuesday with the par 71 course hosting eighteen different teams from around the country, including SEC schools such as Ole Miss, Tennessee and Georgia.

In the first round, Frye led the Wildcats with a score of 69, enough to tie her for 12th.

After Frye, Shepherd and Wenzler both shot 72, tied for 39th overall with seniors Castle and Aperribay rounding out the team with a pair of 74s, a score that would place them tied for 57th.

As a team, the Cats would end the round 9th overall with Ole Miss leading the pack heading into the second round.

In the second round Castle would record the lowest score to lead the pack, shooting a 69 like Frye before her, tying for 35th.

Frye herself shot par, dropping from tied for 12th to tie for 17th.

Shepherd and Aperribay both recorded scores of 76 with the five-over-par seeing Shepherd tie for 67th and Aperribay slightly behind tied for 79th.

Wenzler would also shoot a 77, six-over-par, to end UK’s second round, seeing herself tied for 73rd.

With only one Cat shooting below par in the second round, Kentucky slipped back to 13th place in the team overall standings heading into the third and final round.

The Cats would start the third round looking to regain much of the ground it lost in the second round and finish within the top half of the competition.

Frye, buying into the goal, would come out of the round with her best score of the Classic having shot 67, four-under-par.

Aperribay would also record a new Classic score of 72, one-over-par, while Castle, Shepherd and Wenzler would all score a 74, three-over-par, in the round.

Overall, Frye would come in seventh in the event, Castle tied for 45th, Aperribay and Shepherd both tied for 64th and Wenzler tied for 72nd overall.

As a team Kentucky finished the event with a score of 866, placing them 14th out of the 18 teams competing.

“We didn’t go as low as we wanted to,” head coach Golda Borst said to UK Athletics. “There are a couple of players that I think are going to want to tighten up a little bit, in regard to how they’re hitting it, but overall, we’re just going to keep doing what we’re doing. We’ve got Vanderbilt next, and I think that golf course will suit us really well so we’re not overthinking anything. We’ve got a good team.”

Looking to the future, Kentucky is set to travel to Tennessee to compete in the Mason Rudolph Championship at Vanderbilt Legends Club in Franklin, Tennessee, with the event taking place from Friday, Sep. 23 – Sunday, Sep. 25.