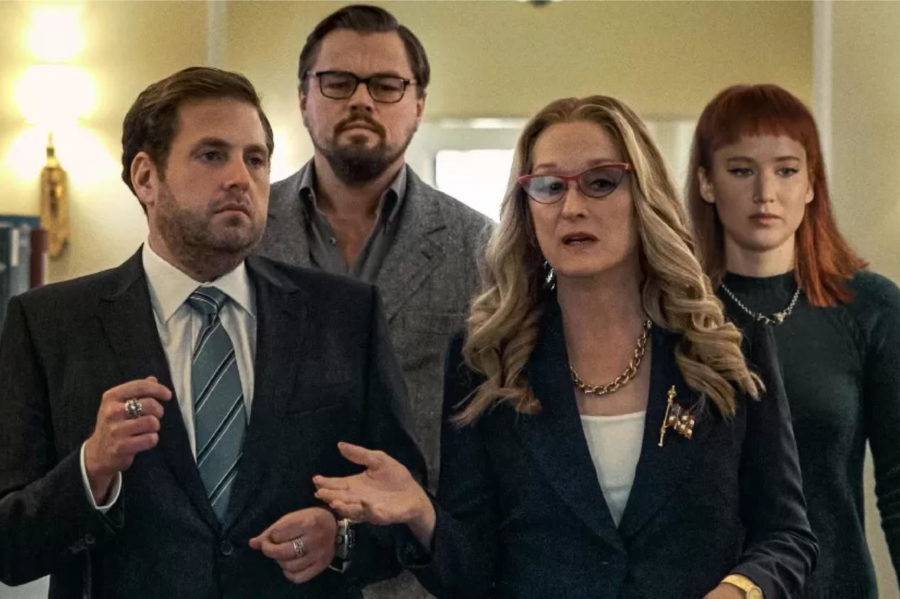 I was incredibly apprehensive to watch “Don’t Look Up,” and to know why, you only need to look at the Rotten Tomatoes description.

“Kate Dibiasky (Jennifer Lawrence), an astronomy grad student, and her professor Dr. Randall Mindy (Leonardo DiCaprio) make an astounding discovery of a comet orbiting within the solar system. The problem: it’s on a direct collision course with Earth. The other problem? No one really seems to care.”

The page describes the Adam McKay-written movie as a satirical comedy, targeting collective denial and a social-media-obsessed public. The last piece of media I watched that really tackled these themes was Bo Burnham’s “Inside,” which was so bleakly honest that it sent me into a depressive spiral so severe that to this day, I cannot listen to its songs without panicking.

Another issue was that not even two minutes into the movie, I was already relating to Kate, quietly rapping to the Wu-Tang Clan while she did her work.

One scene later, I was anxious. Kate had discovered this new comet, and she and her colleagues were thrilled about it. I knew what was coming next, and I felt like yelling at the screen. Kate, don’t get your hopes up. You don’t know how dangerous this is.

Clearly, this comet is a metaphor for something, and I found myself asking what it was. Climate change? COVID? The rapid spread of fascism throughout our country? All of the above? I knew this movie wasn’t going to be one that I could talk to my friends about how ridiculous it was. To avoid any potential public breakdowns, I had to watch it alone.

You’re probably thinking, why even watch this in the first place? True, this seems like a silly decision given how much anxiety movies like these give me. However, in this case, I found curiosity won out over anxiety.

I’ve always been fascinated by why people do the things they do, especially when those things are not beneficial. Why would people ignore an incoming global extinction event? I know a lot of people tried to ignore a global pandemic when it first happened. I had a hard time accepting it myself. But I had a lot going on at the time. Adapting to changes, especially global ones, is already hard for me, and I already had to deal with my dad being sick.

There’s a quote in the middle of the movie from Bob Monkhouse: “I want to die peacefully in my sleep like my grandfather, not screaming in terror like his passengers.”

I get what you’re trying to say, I thought. Everyone in this movie would rather be unaware of impending death than screaming about it, even if there’s something we can do to prevent it. Now let’s see it.

Despite its ridiculousness, I found the scene where Kate and Randall are trying and failing to get the urgency of the situation through to the president oddly refreshing. Sometimes, when I see a problem that has an obvious solution, I get very frustrated, probably in a similar fashion to Kate and Randall.

NASA can send drones up to space to nuke the comet and prevent it from hitting Earth. So do that. It’s either that, or we all die. Why are you talking about Congress?

I also related heavily to Randall, who has no idea why you need a lawyer or a beard trim when distributing useful information, or why he has to “keep it light” on morning TV when reporting on the comet.

Just when I was starting to relax and really see the comedy in this movie, Kate said something in the middle of the morning news that made me remember why I was so scared to watch this movie in the first place.

“Maybe the destruction of the entire planet isn’t supposed to be fun. Maybe it’s supposed to be terrifying and unsettling, and you should stay up all night, every night, crying when we’re all 100% sure gonna f—ing die,” she said.

Sometimes I feel like I was born screaming, and not just in a literal sense. I’ve been involved with activist spaces since I was a young teenager. I see problems, and I can’t stop seeing them. I can tell you 10 ways the world can end, all of them our fault. And I’m terrified that one day, all of my actions will snowball into a footprint so devastating that I will never be able to come back from it.

I found it fascinating when Randall, who has been on Kate’s side from the start, slowly begins to take the side of the tech company who aborted a planet-saving mission to destroy the comet in order to execute a much riskier mission to mine the comet for resources. Could this happen to me? Can enough trauma do that to a person?

Or was he never on Kate’s side to begin with? He said it himself, in a panic at the start of the movie: “Kate, this isn’t real, right? This is just some sort of alternate reality.”

There’s a reason I’ve tried to move myself out of breaking news reporting. I can’t cover hard-hitting issues effectively without getting caught up in all the ethical and moral issues involved in a case. I’ve realized my talent is noticing when local apple fairs happen and then writing a 2,000-word piece about that apple fair. That’s my talent. Because often, when I talk about things that are important to me, I’m told I need to take politics out of my reporting.

But a comet isn’t political. No one seems to understand that, and the people that do all want to cry.

So what’s the verdict? This movie didn’t make me spiral as hard as “Inside” did, but it did bring up the anxiety that I’m going to die soon, and it’ll all be my fault. Usually, the only place that gives me that kind of anxiety is (ironically) social media, so hats off to McKay for that.

Did Ariana Grande know she was starring in something this revolutionary?