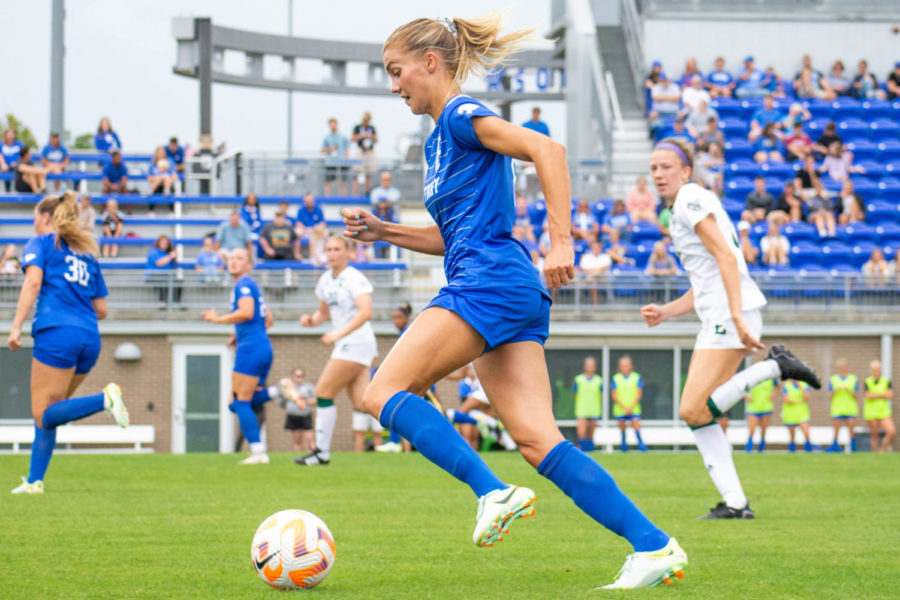 The Wildcat roster features 10 seniors and graduate students between transfers and returning veterans.

After scoring a combined eight goals in its last two outings, UK was eager to add to its season goal tally this season for its seniors.

The Wildcats first accomplished this feat in the 27’ as Richardson crossed the ball from the left side into the box for Rhodes, who promptly put it in the net to put Kentucky up 1-0.

The score would remain unchanged going into halftime despite Kentucky outshooting Eastern Michigan 5-0 on target in the half.

UK would quickly break through once again in the second half, doubling the advantage in the 48’ when Farrington-Bentil played the ball into the path of Hattori, who became the second veteran honored to score in the match.

Feeling a desire for more goals, the Wildcats scored again in the 62’ after a link-up play between Rhodes and Richardson that allowed the latter to rifle the ball into the back of the net and become the third veteran to score on the day.

Not wanting to miss out on the action, sophomore Emilie Rhode would extend the lead to 4-0 after winning the ball at the top of Eastern Michigan’s penalty box with a well-hit strike that flew past the goalkeeper and into the net.

Though Eastern Michigan would eventually get one back in the 71’ with Lilly Spotak scoring the goal, Rhode was not content to allow the lead to shrink back to just three goals without a response and the Danish forward added a fifth goal for Kentucky after connecting on a cross from Hadley Williams.

Her performance did not go unnoticed, with Wildcat head coach Troy Fabiano being impressed by the young star.

“I give her credit because sometimes as a non-starter you don’t always know how many minutes you are going to get,” Fabiano said. “I think the other day she scored her first goal, and she got two today. We need someone to give us a spark off the bench and she’s done that so far in the last couple of games.”

Richardson also caught the good graces of her head coach with her goal and assist, something that is no small feat for the forward as Fabiano is open about the fact that he holds her to a higher standard.

“Hannah’s special,” Fabiano said. “I think the athleticism and the ability to go [from] right to left – we need her to be on top of her ball game if we want to compete in the SEC.”

Richardson was one of three seniors to record a goal on senior day which, despite the game being earlier in the season than traditionally expected, is always a good feeling for veteran stars.

“It’s always a great feeling to have seniors score on a day like this, it’s great,” Henschler said after the game. “Working on our work rate and making sure we stay together as a team and play our game is the most important part.”

Kentucky returns to action this Friday, Sept. 16, as the Cats begin conference play against Ole miss at home.

Kick off at the Bell is currently scheduled for 5 p.m. EST and will stream live on SEC Network+.