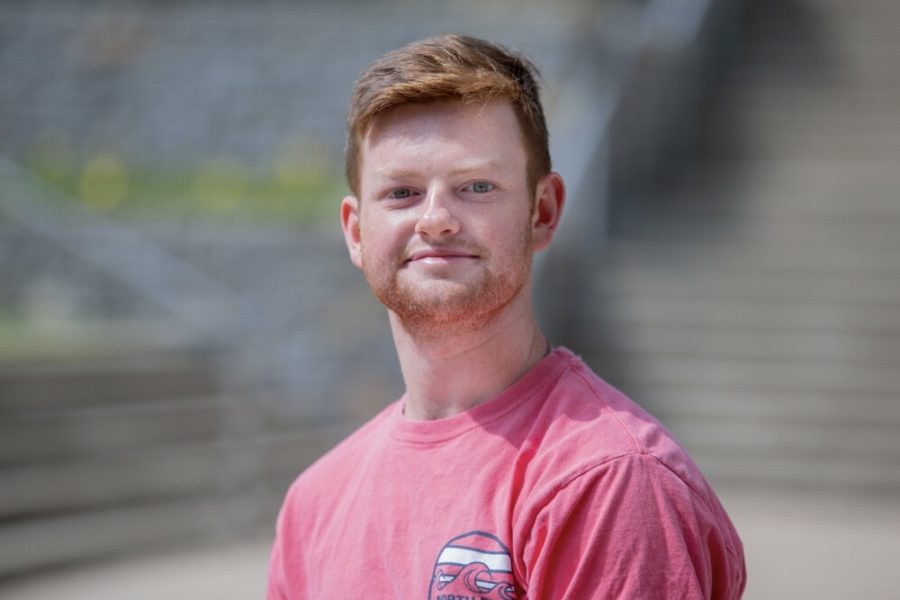 Christian O’Grady poses for a photo on Friday, Sept, 2, 2022, at the University of Kentucky in Lexington, Kentucky. Photo by David Falade | Kentucky Kernel

A Long Island native, southpaw and gummy bear fan, Christian O’Grady is the University of Kentucky’s co-captain for the rugby team for the 2022 season.

O’Grady is a senior majoring in finance and minoring in business analytics. He has served as club president since his freshman year and was promoted to captain this past year.

While rugby is not so popular in the Southeast, O’Grady said the sport is “safer than American football even though there is less equipment.”

“It’s a mix of American football and soccer. A lot of tackling is involved. You have to pass backwards and catch it running forwards. The only way to advance the ball is running it forward or kicking it forward,” he said.

UK’s club rugby team has 35 players and is ranked 31st in the country, with seven wins and three losses last season. The group is looking to win an SEC tournament title, and O’Grady said he is looking for an SEC all-conference award.

O’Grady said being a captain is all about how you carry yourself, and no matter what kind of day it is he will always have a smile on his face.

“I have always thought of myself as a leader, and I think I lead by example more than I lead by words,” he said.

He said his one pregame superstition is eating gummy bears on the bus ride down to wherever they are playing that day. The one time he didn’t, he got injured.

“Now, it’s like I have to. It’s just mental in my head that I have to eat them,” O’Grady said.

As a Christian, he also brings faith into his sport and teammates. The club has Bible studies once a week after practice.

“It’s mostly just the guys getting to talk about stuff outside of hanging out and outside of rugby. It’s definitely a time to open up to your friends, and it builds really good connections with each other,” O’Grady said.

To join UK’s rugby club, potential players can look it up on BBNvolved. The club is welcome to any new players, whether or not they have played rugby.

O’Grady is looking forward to his final season as a Wildcat and encourages anyone to come try the rugby team. New people may even get to have some of his gummy bears if they join.