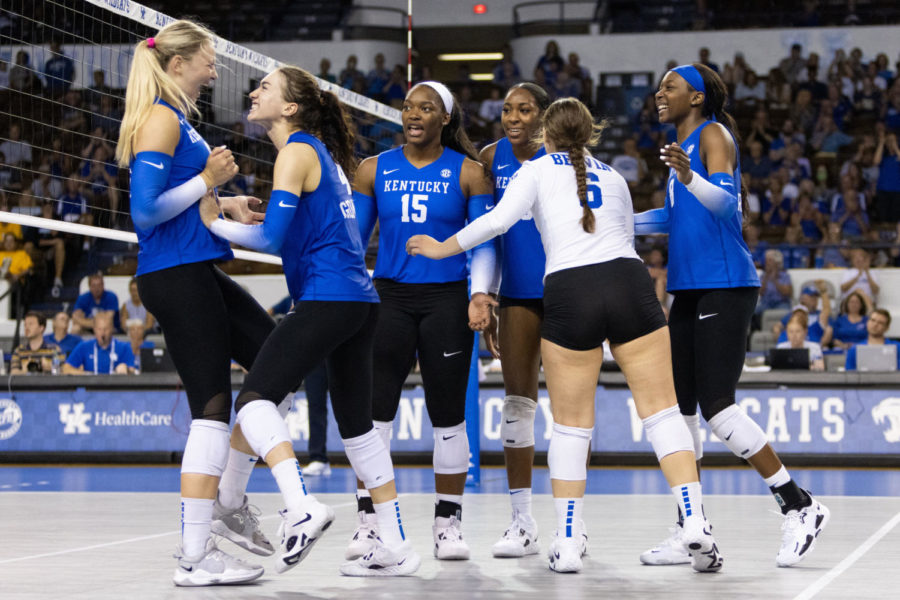 Kentucky volleyball (4-1) triumphed in Omaha this past weekend, taking down two top 25 programs en route to a sweep of the Bluejay Invitational.

Hosted by Creighton after first being organized in 2014, the Bluejay Invitational was one of four events that saw the same four teams compete round-robin style against each other.

As this marks the eighth and final year in the contract, the Cats were determined to prove themselves entering their first matchup against Northern Iowa, being 1-1 on the season by that point.

Junior Reagan Rutherford and graduate student Adanna Rollins both tallied double digit kill totals, with 15 and 11 respectively, to boost the Cats over the Panthers, sweeping Northern Iowa and starting the invitational off with a bang.

The victory saw Kentucky finish the eight-year contract 6-2 against UNI.
While happy to sweep the Panthers, Kentucky knew that the hardest challenges were yet to come, as both Creighton and USC were ranked within the top 25.

Kentucky found its biggest challenge in the host team with No. 17 Creighton winning the first set before UK would win the next three to claim victory, the first set loss ultimately being the only one the Cats would take.

Rutherford set a new career high in kills with 25, playing a pivotal role in UK’s success in securing a winning record in the Invitational.

While respectable on its own, Kentucky wasn’t satisfied with merely having a winning record, aiming its sights higher as the final match with No. 25 USC drew near.

The Wildcats’ high ambitions would pay off as they finished strong with a sweep over the Trojans thanks to Rutherford’s 14 kills, completing the overall event sweep with just the one set loss.

Goetzinger and senior middle blocker Azhani Tealer also each had four blocks against USC that allowed UK the advantage it needed to claim victory in the final.

After all three matches had concluded, Rutherford was crowned tournament MVP, with Grome and Goetzinger also earning all-tournament team spots for their efforts as well.

The wins marked the first and only time the Wildcats swept the four-team tournament. Time will tell whether the momentum is enough to keep them going in Friday’s colossal showdown against reigning national champions and current No. 6 Wisconsin.

Kentucky and Wisconsin are set to begin play at 6 p.m. EST on Friday, Sept. 9, inside Memorial Coliseum, with the bout also airing live on ESPNU.