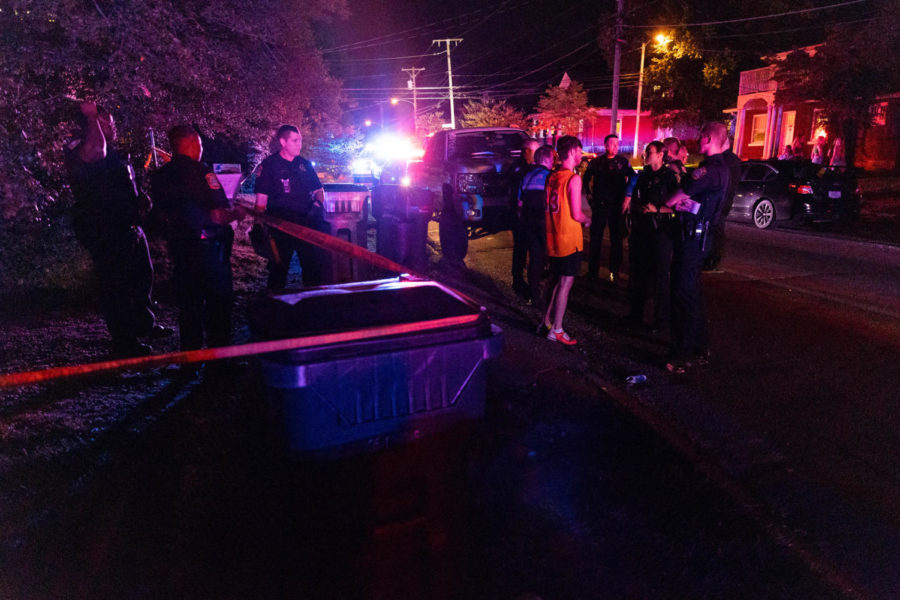 Police talk to witnesses after responding to reports of shots being fired on University Avenue on Thursday, Sept. 8, 2022, in Lexington, Kentucky. Photo by Jack Weaver | Staff

After shots were fired at an off-campus house late Wednesday evening, 11 University of Kentucky students sustained non-life-threatening injuries. The event was associated with the Theta Chi Fraternity.

One female student was shot in the leg, and 10 other students were taken to the UK Chandler Hospital to be treated for non-gunshot injuries from shrapnel, according to a statement from the university. In a statement to the Kernel, UK spokesperson Jay Blanton described the injuries as “minor or non-life-threatening.”

“We feel very fortunate that none of our students sustained life-threatening injuries, and all appear to be on their way to recovery quickly,” he said.

According to a statement from the Lexington Police Department, police responded to the 200 block of University Avenue around 11:52 p.m. Wednesday night after receiving reports of shots being fired. A UK Alert text message was sent out at 12:02 a.m. on Thursday, informing the campus community of the incident and warning to avoid the area.

The UK statement says the gunshot occurred during a fight at a party at 205 University Avenue, an off-campus house.

“Uninvited subjects came to the party and an altercation ensued,” the statement says.

In a press conference on Thursday afternoon, UK Chief of Police Joe Monroe said a single gunshot was fired downstairs in the basement where a shell casing and bullet fragments were recovered. Two handgun pistols were recovered at the scene.

Monroe said the house is leased to a member of the Theta Chi Fraternity, but the party was not a UK-sanctioned event, and there are no plans to delay or cancel fraternity rush because of the incident. Although he did not have a definite number of individuals at the party, Monroe said the house and yard were “very crowded” when police arrived on the scene.

Potomac Rubbins, a UK student who was at a house across the street from where the incident occurred, said that loud music and yelling from other house parties prevented him from hearing the gunshot. However, he said he was alerted to the incident when “four to five girls” knocked on the door looking for an address.

Police made two other arrests, which were unrelated to the shooting. Blanton said none of those arrested are UK students.

Monroe said the three individuals who were taken into custody were “responsible for crashing this house party,” but it did not appear to be a targeted incident.

According to Blanton, the UK Office of Student Conduct will be conducting an investigation running parallel with the police investigation. He encouraged impacted students to utilize the “robust” mental health and counseling services that UK offers.

“We want them to know that we’re here for them,” he said.

The investigation is still ongoing; anyone with information is encouraged to contact Lexington Police at (859) 258-3600.

This is a developing story and will be updated.