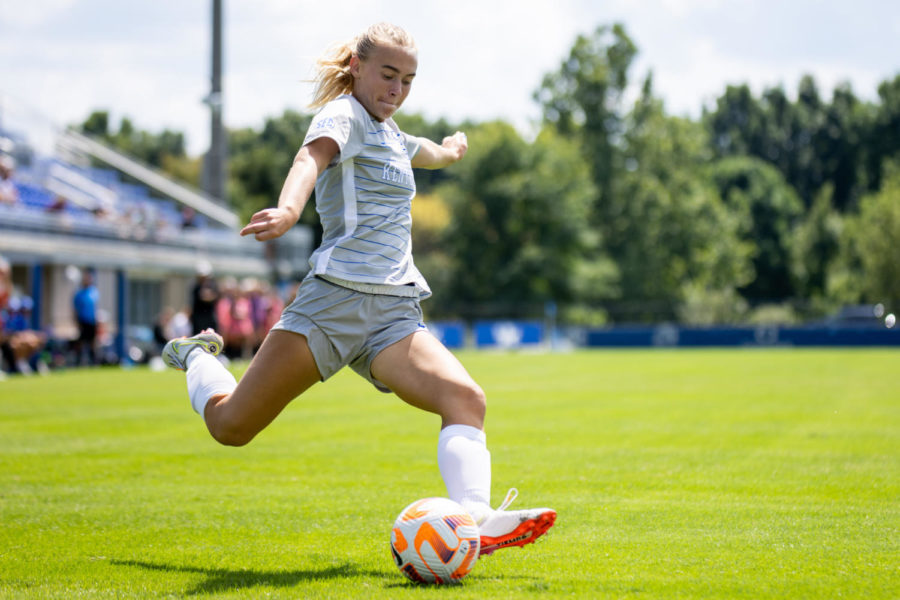 Kentucky Wildcats forward Hannah Richardson (8) kicks the ball towards the goal during the Kentucky vs. EKU womens soccer game on Sunday, Aug. 28, 2022, at the Wendell and Vickie Bell Soccer Complex in Lexington, Kentucky. UK won 4-0. Photo by Jack Weaver | Staff

After a loss to Western Kentucky last Thursday, Kentucky womens soccer (5-1) was able to bounce back and get a dominant 4-0 win over Iowa State (1-3-1) on Sunday.

The Wildcats had a slow start against the Cyclones and, although they had seven shots compared to Iowa State’s four in the first period, could not find an opening to score.

This would change entering the second half as a switch appeared to be flipped for the team after the break.

Kentucky forward Hannah Richardson entered the second period looking determined to score, and she did just that in the 60’ off an assist from graduate transfer Hailey Farrington-Bentil.

Kentucky had several more shot attempts throughout the second half, but none of them could find the net until the 82’ minute when sophomore defender Dana Dahm was able to drive towards the goal and sneak the ball into the bottom left corner behind Cyclone keeper Jordan Silkowitz.

The goal marked not just Dahm’s first goal of the season, but first as a Wildcat as well.

Dahm’s goal set off a Wildcat scoring explosion with freshman midfielder Mallory Glass also scoring in the 84’ off an assist from fellow midfielder Ulfa Ulfarsdottir.

Despite having just six minutes left to play, the goals didn’t end there for the Cats.

With less than one minute left in the game the Wildcat’s were able to secure a fourth and final goal from sophomore forward Emilie Rhode, who was assisted by freshman Taylor Rinzel and senior Maggie Henschler.

Head coach Troy Fabiano was pleased with the final result, especially coming off a loss prior, though the first half still left a bit to be desired for the man in charge.

“[I told them at halftime] at some point when you want to win a championship, you have to win on a Sunday, right?” Fabiano said. “You traveled on a Thursday and didn’t get a result. How do you respond?”

Fabiano also spoke about how he holds the team, and especially its stars, to a higher standard because he knows that they have what it takes to win.

“It’s funny because a lot of coaches will stay away from critiquing or going after the strong players,” Fabiano said. “But I am the opposite because I know they can get a higher ceiling.”

One of the strong players that Fabiano put a lot of focus on was Richardson, with the coach saying he tries to instill in her how different she is in how much she impacts the tide of a game.

Fabiano’s faith in Richardson proved to be warranted against the Cyclones as it was the captain who opened the scoring that led to a lopsided victory in favor of UK.

Richardson herself said she knows that this team has what it takes to win and complimented the way her teammates responded to the first loss of the season.

“We’re trying to change the culture,” Richardson said. “[We want to] make it a winning culture.”

Richardson had contributed to over half of the team’s goals this season through direct scoring or assists by the time of her goal that put UK up 1-0, though this dropped to just under half with the three subsequent goals.

Despite being such a key player and her coach’s insistence that she can turn the tide of a game, Richardson expressed that she is not concerned about her personal goal statistics.

“Anything that I can do to use my individual gifts to bring energy to the team and win makes me happy at the end of the day,” Richardson said. “I may not score in one game, or I may assist in the other, and at the end of the day it doesn’t matter [what your stats look like], it’s about the result.”

With conference play looming with UK’s SEC opener against Ole Miss under two weeks away, the Cats will have a few more opportunities to grow and develop before being put through the gauntlet that is an SEC schedule.

Kentucky returns to play on Thursday, Sept. 8, at home against Wright State. Kickoff is slated for 7 p.m. EST and will air live on the SEC Network+.