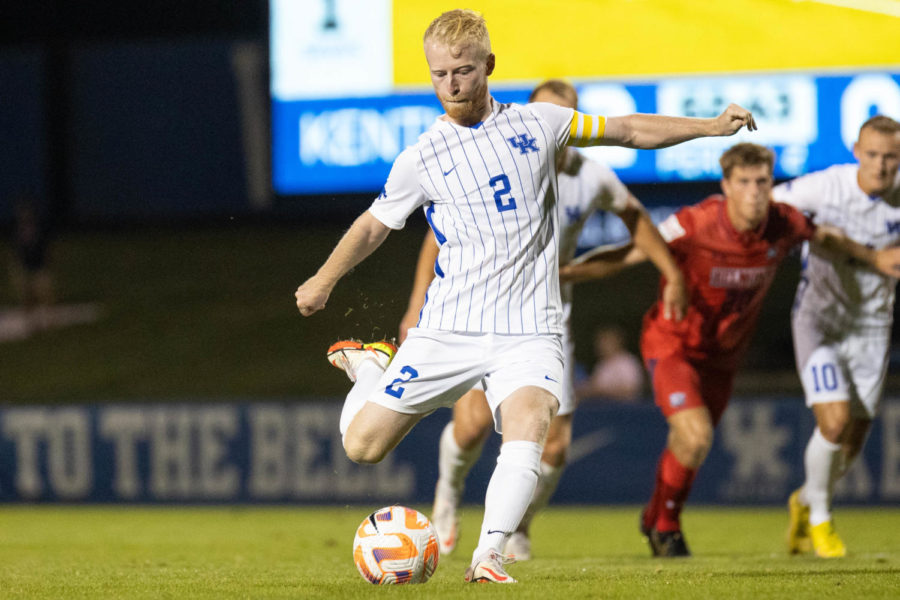 After dominating possession without being able to score, the breakthrough for Kentucky came in the 44’ when Enzo Mauriz played a diagonal long ball into the box from the right side of the box to Brennan Creek, who then flicked it to Ben Damge, who fired the ball home with a right footed strike.

The goal was the first of the season for the junior forward.

Entering the half with the 1-0 lead, Kentucky was eager to put the game to bed in half two, ultimately being successful in the mission with two quick goals in both the 61’ and 63’.

Casper Grening scored the first goal to put UK up 2-0 after Robert Screen played in a cross from the right side that fell kindly to the sophomore midfielder.

Similar to Damge before him, the goal was the first of the season for Grening.

If Belmont had any hope remaining at 2-0 it was quickly stomped out just two minutes later when Creek was brought down in the box, giving the Wildcats a penalty kick that Screen would go on to convert to make the score 3-0.

The Cats were not only relentless in attack, but also defensively sound, earning their third clean sheet this season, still perfect on the year, something that head coach Johan Cedergren was very pleased with.

“I thought we put on a good show today and we defended really well as a team,” Cedergren said. “Led by the two captains, Robert Screen and Luis Grassow, [it was] very special.”

With defending a focus of the Wildcats, the strong back line also saw a new face on Friday as Taco Nsimpasi, a freshman from Lexington, made his first career start for the Cats.

“Taco earned the start today,” Cedergren said. “He worked really hard and he’s also very good on the ball so I’m very excited for him. [And I’m] excited to have local products.”

With the hometown fans eager to cheer a local prospect, it was a special night for the former Lexington Catholic Academy product.

“It was amazing, honestly.,” Nsimpasi said. “I’ve been dreaming about this forever and I’m excited to bring my talent to the next level. I’m happy to have the home support with friends and family here to support me.”

With the win in the books, all focus turns toward next week as Kentucky takes on rival Louisville, with Cedergren hoping to duplicate several aspects of the win over Belmont.

“We don’t sit back, we go after it, we press high, we are aggressive and we want to win our one-on-one battles,” Cedergren said. “We want to be brave on the ball, we want the guy on the ball to have three or four options and when we are getting close to the goal let’s put the ball in the back of the net. Three goals today were a good start.”

Kentucky is scheduled to play Louisville on Tuesday, Sept. 6, with kickoff slated for 7:30 p.m. EST at the Wendell and Vickie Bell Soccer Complex and being streamed live on ESPN+.