Humans of UK: Ben Williams is the cream of the crop 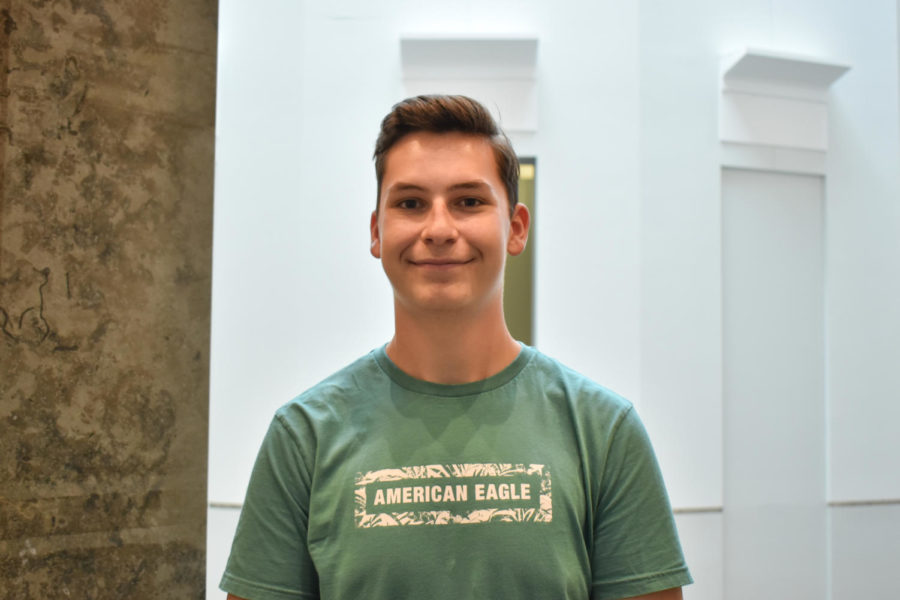 Ben Williams poses for a portrait on Tuesday, Aug. 30, 2022, at University of Kentucky in Lexington, Kentucky. Photo by Abbey Cutrer | Kentucky Kernel

UK freshman Ben Williams started his own ice cream truck, “Ben’s Jammin Ice Cream,” in 2019, a venture which became an immediate success in his local community of Nelson County.

Williams’ interests don’t just lie in his truck, but also in his passions that led him to beginning the business in the first place.

As a high schooler, Williams was interested in agriculture. His involvement in the Future Farmers of America (FFA) organization required him to create a Supervised Agricultural Experience (SAE) project.

“I was looking for a way that I could make an impact in agriculture rather than just going for personal gain,” Williams said. “I had just recently heard about Walmart switching its dairy processing to its own. It cut Dean’s Foods out, and they went bankrupt, and so Kentucky Dairy Farms went from 1,200 to 500 in just one year.”

After hearing about Walmart, Williams knew that he wanted his SAE project to benefit the dairy industry.

“I started looking for a few different avenues and ended up coming into an ice cream truck,” he said.

After gaining his parents’ approval and a few months of planning, Williams found a truck at a junkyard and took out a loan of $10,000, eventually turning it into the business it is today.

“When I started out as a freshman in high school and I took out the $10,000 loan, I was really scared,” Williams said. “I didn’t want to go into it and end up failing and being a few thousands dollars in debt.”

Overcoming his fears and challenges along the way, Williams persevered and created his truck, and quickly was overwhelmed with the amount of community support he and his truck garnered.

“I had people calling me and booking me for birthday parties, festivals, wedding events … It was really crazy that I had so much community support,” he said.

Even though Williams’ truck is staying in Nelson County for the school year, it has made the trip to UK twice for sorority rush and other events on campus. Williams plans to bring the truck back to campus more throughout the school year.

Wanting to pursue agriculture post-grad, Williams is unclear of where his journey with “Ben’s Jammin Ice Cream” will take him.

“I’m really just interested in an agriculture job, and I love running the truck, and so if I have the opportunity to keep running it on the side I would love to do it,” he said.

Regardless of where Williams and his truck end up, he’s thankful for the experience and the people that have made it worthwhile.

“I just think I’m a positive person and I know through the struggles of my business; I was down in the dumps a lot and a very anxious person,” he said. “Through persevering through those challenges, it has made me a lot more optimistic in how I view my day-to-day life.”