The culture and ceremony of football: An international perspective 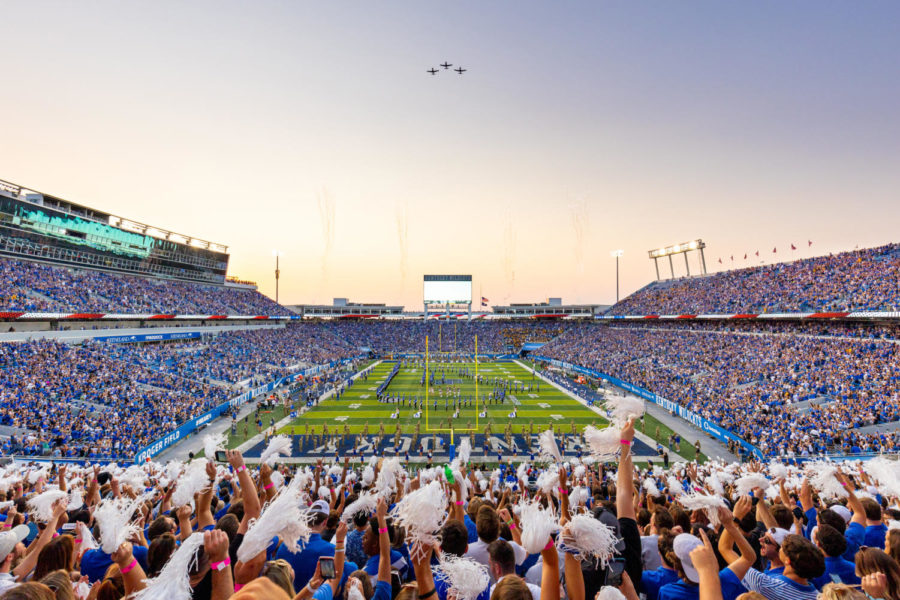 Fans cheer as three planes perform a flyover before the Kentucky vs. Missouri football game on Saturday, Sept. 11, 2021, at Kroger Field in Lexington, Kentucky. Photo by Jack Weaver | Kentucky Kernel

When I think about the American football experience, it’s this exact picture I have: a giant place full of my romanticized American stereotypes.

As an international student coming from Rio de Janeiro, Brazil, I’ve always created the fantasy of being part of the crowd that composes not only a game but also a ceremony.

The media, especially when it comes to the cinematography industry, has a huge influence on this point of view. Growing up, watching Friday Night Lights (2004) and She’s the Man (2006) made a whole generation of people outside the US develop the notion that American football symbolizes all the advancement and success not seen in their own countries.

For a Brazilian 10-year-old girl, seeing a cheerleader with a perfect body act with impeccable timing and have the leader of the football team as her boyfriend was simply the most perfect scenario to be fantasized about. Not only did I have this fantasy, but also several other girls who grew up with this great mass of American influence in their minds.

“Every Latin American grows up watching American media and teenage shows/movies always show football, players and all that. I’m no exception and I always wanted to go to a game for the experience,” UK student Ariane Rodrigues Patrus Almeida said.

Almeida was born and raised in Minas Gerais, Brazil. She said that much more than understanding the rules of the game and knowing who to cheer for is the idea of being a part of the experience.

From my perspective, the biggest motivation for most international students is to actively participate in something so typically American. This sense of culture can be found in football and all its complementary traditions, like the cheerleader figure.

She said she does not feel comfortable in an environment like an American football game. Instead, she feels like she does not belong. For her, it’s a cultural feature that doesn’t appeal to her interest in any form.

“I prefer to avoid football games because I find it so overwhelming and boring,” Alfaro said.

“We were ranked 25 on the AP polls, so I assume we were gonna land somewhere in there in the final pool as well,” Hauk said. “I hope we make it to the SEC final stage. A national championship would be the dream.”

For international students, being active in opportunities provided by studying abroad is more than crucial – not only for our adaptation process, but also for creating memories and new stories. However, I still believe that it is necessary for us to remember the value of our roots.

I don’t think the American way of life, like the famous football game, should be our only source of inspiration. I do believe that every student from all different regions of the globe has a clear power of influence.

Creating fantasies doesn’t hurt anyone. As a potent art lover, I see fantasizing as a great refuge. But, it is also worth adding, your experience as an international student here in the US can have the same magic by exploring other traditions from neighboring or distant countries and cultures.