Column: This season may be do or die for Kentucky football 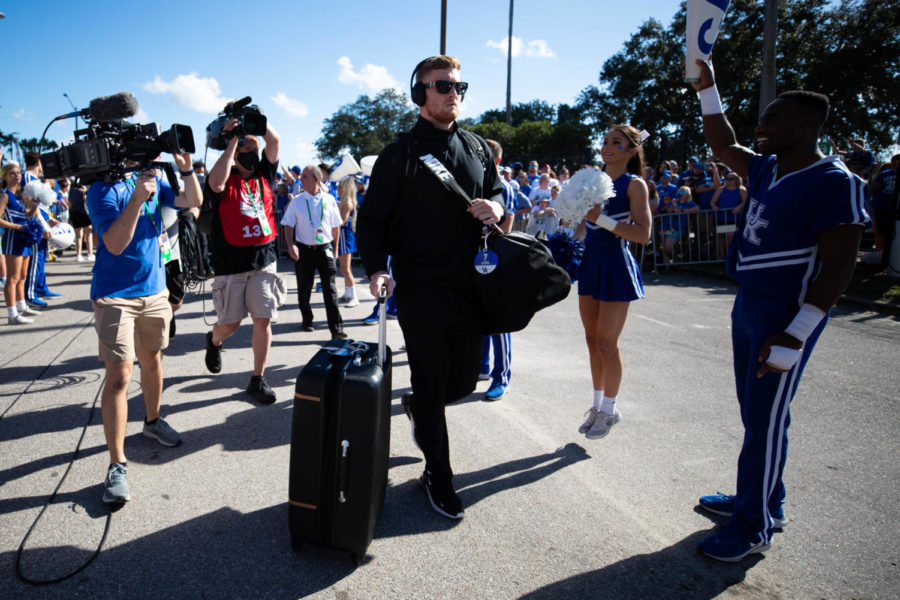 As the Kentucky football season approaches, now under one week away, the consensus on campus is general excitement and understandably so.

Football Caturdays in the bluegrass are akin to a religious holiday with tailgaters arriving hours upon hours before kickoff to party and pre-game the dry stadium and cheer on the Cats.

This has only gotten more prominent since head coach Mark Stoops took over the program and has since led UK to four straight bowl wins, two of which were Citrus Bowls.

With 2021 being the first year of Penn State transfer Will Levis starting under center, Kentucky fans were more willing to forgive several of his costly interceptions, because after the era of Terry Wilson and Lynn Bowden Jr, most UK fans were just happy to have a quarterback that is a threat to throw a deep ball AND rush.

Year two, that leash is going to be a little tighter.

As a whole, with the excitement surrounding the program and Kentucky fans predicting 11-1 to undefeated seasons, many fail to see how critical this season actually is and just how destructive a poor showing could be.

Kentucky football is fresh off a 10-win season, brought in an NFL quarterback coach to take over as offensive coordinator and earned a ranking in the preseason top 25 for the first time in 44 years.

While all of that is surely exciting to fans, the spotlight giveth and the spotlight taketh away.
Kentucky football has notoriously not been regarded as an elite program for decades until Mark Stoops came to town, with last season’s 5-0 start marking the first time in 70 years the program had such a successful start.

Now that national attention has turned in Kentucky’s favor, the worst case scenario would be a 2021 Washington: a team ranked in the preseason that crumbled far beyond what was expected of them and became a laughing stock in the sport for the season.

Kentucky may be ready to take on the season, but it also may not, and if the latter is the case, the damage done to UK’s reputation will be hard to get past.

Programs like Georgia, Tennessee, Florida and more can afford to take a few rough losses without being completely turned on by the AP voters, but a relative newbie to the top level like Kentucky?

If Kentucky fails this year there’s going to be millions of fans across the country ready to mock the program and claim that UK is exactly what they always thought it was: a perennial second tier SEC East team.

Kentucky needs to succeed this season for its status, but with how the schedule is layed out, one unfavorable loss could snowball into three or four if UK loses confidence in its ability to play games on the road.

Apart from Georgia, all three of Kentucky’s other biggest wildcard games come away from home.

There’s also the fact that Tennessee brought back Hendon Hooker, an early national player of the year candidate, who Kentucky will have to play in Neyland Stadium after losing an offensive shootout in Lexington the season prior.

While Hooker may have little doubt surrounding his status as an elite quarterback, Levis could hardly say the same.

Levis’s decision-making last season left some to be desired and, while it was a focus of his game in the offseason, the glimpses on display at Fan Day were not quite up to expectations.
Stoops brought in former San Francisco 49ers quarterback coach Rich Scagarello to lead the offense, likely in big part because of Levis, but whether or not the lone offseason was enough is to be determined.

Levis is sure to be a thrilling quarterback to watch regardless, as he was entertaining last season as well. But with early draft boards predicting him as a high first round talent, there’s worry amongst some fans that he may have become a little overrated.

If Levis struggles with turnovers similar to how he did last season, it may not just cost Kentucky some games, but it may see the reputation of the offense as a whole take a hit.
A collapse or even a fall back to a 7-5 season could do damage to Kentucky that is very hard to overcome.

National voters and non Wildcat fans will be significantly harder to convince of UK’s legitimacy if it falls short this year.

That said, a successful season for the Cats that confirms the preseason ranking could provide a boost to the program that sees Kentucky eventually solidify itself as a national power in the same tier many regard teams like Florida, Michigan and Oklahoma.

This season truly feels like it is do or die for Kentucky in regards to the status and reputation of the program.

Kentucky football would not completely fall apart with a bad 2022, but it will be far more difficult for the Cats to gain respect amongst non fans in the future.

Alternatively, Kentucky would also not be golden if it is successful in 2022, but a confirmation of its status as a preseason top 25 team would be instrumental in solidifying the Wildcats as here to stay.

There’s a lot more at stake than people may realize as the history of the 2022 football season begins being written this Saturday, but one thing is for certain: regardless of how it goes, it’ll surely be entertaining.