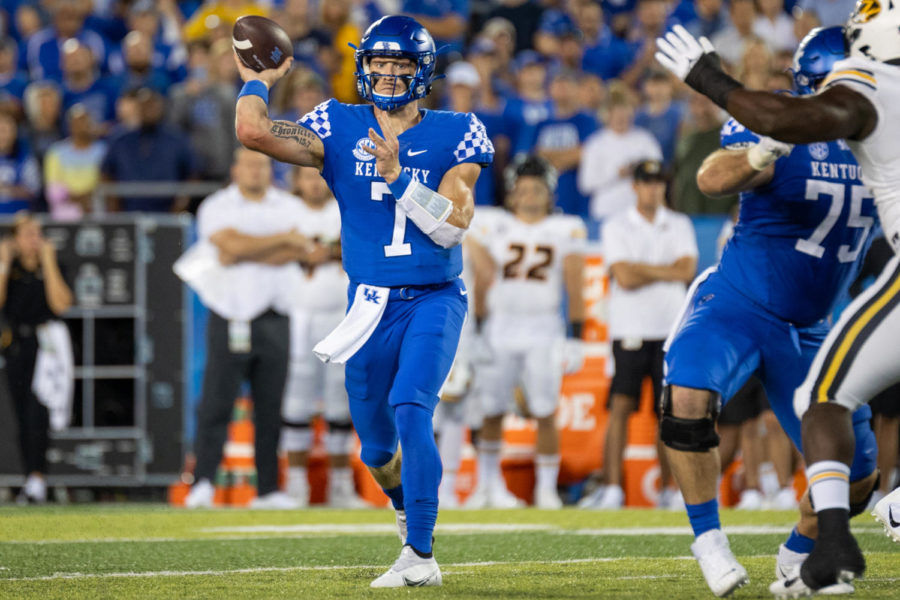 Entering his senior season at Kentucky, Will Levis is set to lead the Wildcats after a successful 10-3 season topped off with a Citrus Bowl victory over Iowa in his first season.

The win continued Kentucky’s streak of four straight bowl game wins but was the first with Levis, who transferred into the program from Penn State.

Success inevitably becomes synonymous with attention and expectations, and this is certainly the case at an SEC school like Kentucky.

Levis’ 2021 campaign set the stage for his career with the Wildcats, as he became known for his strong arm and quick release, quickly establishing himself as a favorite across the bluegrass with fans who had been without a true passing quarterback for years prior.

Throwing for 2,826 yards, 24 touchdowns and 13 interceptions, while also rushing for nine additional touchdowns, the invaluable dual threat ability makes Levis challenging to defend.
Additionally, this also saw Levis enter the company of only seven Wildcats to ever accumulate more than 3,000 yards in a single season.

His efforts were good enough to land him fourth in the SEC in total touchdowns last season.
His feats earned him several accolades including the Manning Award Star of the Week and the National Offensive Player of the Week Award twice each.

Naturally, Levis is once again under the spotlight with Kentucky fans and scouts alike placing high expectations upon the star to put forth a strong senior year.

Developing into a highly touted prospect for the 2023 NFL Draft, Levis leads a Kentucky team that enters the season ranked No. 20 in the preseason poll.

Things will not be all easy sailing for Levis though as the departure of top receiver Wan’Dale Robinson, who was selected in the second round of the 2021 NFL Draft by the New York Giants.

An unclear number one target could pose a problem for Levis, though new offensive coordinator Rich Scangarello and other offensive coaches remain optimistic with new stars such as transfer Tayvion Robinson and freshman Dane Key.

Hoping to clean up several of his decision-making mistakes, Levis was average among fellow SEC quarterbacks in QB ranking with a 76.8, throwing 13 interceptions, with Kentucky as a team ranked 45th in passing efficiency nationwide.

The Mark Stoops era has rejuvenated Kentucky football, turning a once 2-10 program into a two-time Citrus Bowl championship winning power.

Bringing in Scangarello in the offseason after previous offensive coordinator Jon Sumrall was hired as the head coach of Troy, Stoops clearly looks to develop not just Levis but future quarterbacks at Kentucky as well.

Scangarello was most recently the quarterback coach for the San Francisco 49ers of the NFL, coaching the likes of Jimmy Garoppolo and Trey Lance.

Bringing over the West Coast offense play calling and favoring key passing plays, Kentucky football looks to be going in a direction that seems to be specially tailored to maximizing Levis’ game.

Kentucky starts its 2022 season against Miami Ohio this Saturday, Sept. 3, at Kroger Field, with all eyes firmly placed on Levis as he embarks on his senior year as a Wildcat.