Kentucky volleyball bounces back with 3-0 victory over Ohio 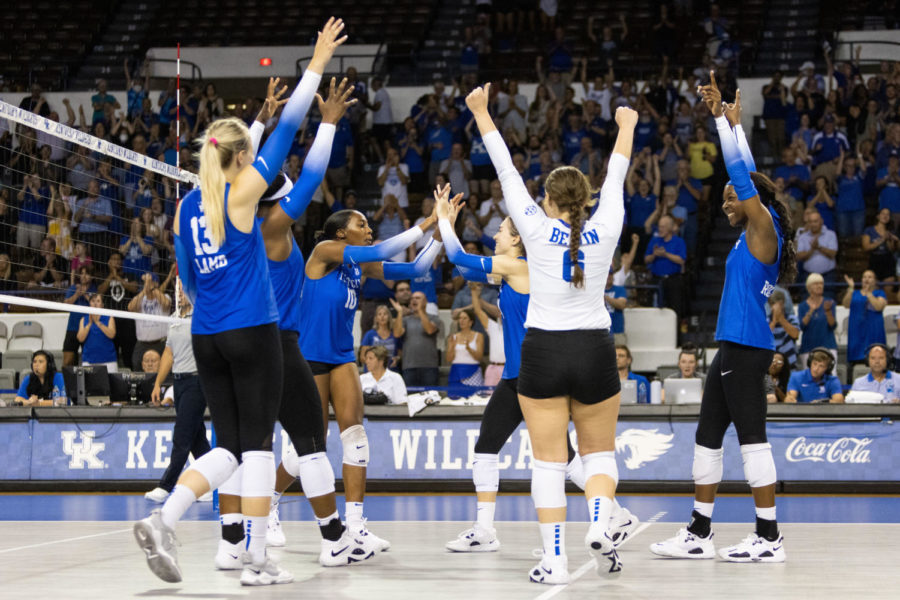 The second game of the season for No. 11 Kentucky was successful as it cruised to a 3-0 victory over Ohio.

The win was the first of the season for UK after the Cats lost their season opener on Friday night against Marquette.

The bounce back performance over Ohio saw Elise Goetiznger finish with 12 kills while Reagan Rutherford finished the match with 11.

Despite the sweeping victory, the first set was competitive early on before Kentucky could find its groove.

Riah Walker’s ace would tie the opening set at five, and she continued the momentum with a thrilling dive to keep a point alive that UK would seemingly win. Unfortunately for the sophomore libero, the point would be overturned, much to the chagrin of the home fans.

Rutherford’s powerful third kill eventually gave the Wildcats a 19-17 lead in the set and a few moments later, a kill by Erin Lamb propelled UK to a 25-20 set win.

Lamb’s final kill of the set would be far from her only contribution, having recorded six kills in the first set alone.

Entering the second set, Kentucky’s bench would prove to be pivotal after an awkward play saw Lamb run into the side of the net and sideline her for the remainder of the match.

Kelly Franxman entered the game as her replacement.

“She was ready to come back, she was able to go, but [we had to be] precautionary,” head coach Craig Skinner said regarding his decision to keep Lamb out for the remainder of the contest. “No sense pushing the envelope on something like that.”

Despite the loss, Kentucky kept the momentum going as a kill by Azhani Tealer was followed by an ace from Rutherford that would hit the net and drop, putting the Wildcats up 11-3 in the second set.

Later in the set, Skinner would challenge a net violation called on Rutherford and after a couple minutes the challenge was successful as the call on the floor was overturned, with Kentucky now leading 17-9.

Rutherford added one more kill in the set after the challenge as UK would go on to win the set 25-11.

Emma Grome recorded a game-high 21 assists by the end of the second set, with the sophomore going on to finish the match with 31 total.

Kentucky would go on to win the third set, but the team spirit on display throughout the action could be regarded as a bigger team victory than the actual score.

Franxman, who’s substitution for Lamb had been her season debut one set prior, was hugged by the team on the floor after her block put Kentucky up 13-10, an impactful moment for the senior outside hitter.

Franxman would not be the only Wildcat to see their season debut against Ohio as Jordyn Williams also entered late in the third set.

Williams was able to pick up two kills in a short period of time, putting the Cats up 23-16 with her serving.

Goetzinger would ultimately win the match for Kentucky with a final kill, ending the set 25-19 in favor of the Cats.

“I think it’s just really similar personalities all meshing really well together,” Goetzinger said regarding the team’s chemistry. “Obviously [it] starts with recruiting and going to work together and it’s paid off really well. We’ve spent three months together so far and when you think about it, it’s just three months, but it’s a really great group of girls [with] really good personalities all mixed together.”

The Wildcats 3-0 win was the first of the new season and the schedule will allow them to dwell on it for a few days before their next tilt.

Kentucky faces Northern Iowa in Omaha, Nebraska on Friday, Sept. 2, before facing off against Creighton on Saturday and USC on Sunday, all in Omaha.

Kentucky and Northern Iowa are scheduled to take the court at 6 p.m. EST on Friday, with the Cats hoping to secure a positive result heading into two tough road matchups.