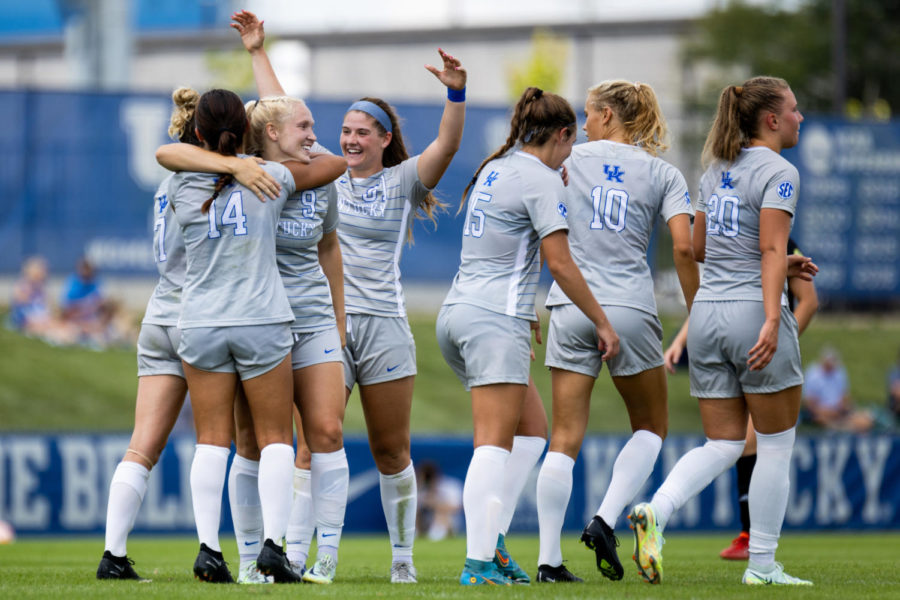 Kentucky players celebrate after a goal during the Kentucky vs. EKU womens soccer game on Sunday, Aug. 28, 2022, at the Wendell and Vickie Bell Soccer Complex in Lexington, Kentucky. UK won 4-0. Photo by Jack Weaver | Staff

Kentucky womens soccer (4-0) continued its impressive start to the new season defeating Eastern Kentucky (1-2) 4-0 on Sunday, improving to 4-0 for the first time since 2012.

Having scored nine goals in their first three games at home this season, the Wildcats were eager to continue finding the net against the Colonels.

UK would do exactly in the 15’ when Hannah Richardson served a cross into the box on the left side of the attack, finding Jordyn Rhodes who sent it home to open the scoring.

Kentucky would double the advantage in the 21’ when Ulfa Ulfarsdottir played in a corner to transfer Maggy Henschler, who headed it into the net to make it 2-0. The goal was her first since joining the Wildcats.

The Cats would see another new scorer in the 40’ when Taylor Hattori hit a shot from distance that found the back of the net, marking the second former Panther to score their first in Lexington.

Not satisfied with just the two new additions to the goal sheet, UK added one more when Lesley Kiesling opened her account for the Cats in the 45’, gliding past the EKU defense and scoring one-on-one.

Kentucky was able to hold on to the 4-0 lead for the victory and maintain a clean sheet with the back line of Henschler, Rafferty Kugler, Dana Dahm and Anna Young holding the Colonels to no shots in the second half.

Young also earned her second start of her collegiate career against EKU, earning her first last Thursday against Purdue.

“She showed in the spring [that] she should be on the field for us,” Fabiano said. “Today she did her job, I was happy. Especially coming out against Purdue and starting, never playing there ever in life, I’m happy for her.”

By the final whistle UK saw three athletes bag their first goals of the season, bringing the total number of different goal scorers to 10 this season, surpassing the seven total for all of last season.

The variety of goal scorers takes much of the load off of players such as Rhodes and Richardson, both SEC preseason watch list members, who are no longer forced to be the primary threats in front of goal that are singled out by opposing defenses.

“It’s awesome, it’s so much fun just to see everyone scoring,” Rhodes said. “It also helps our team be more successful to have many people who can put the ball in the back of the net.”

The Wildcats are set to return to action this Thursday, Sept. 1, as they travel south to face Western Kentucky. Kick off in Bowling Green is currently scheduled for 8 p.m. EST.