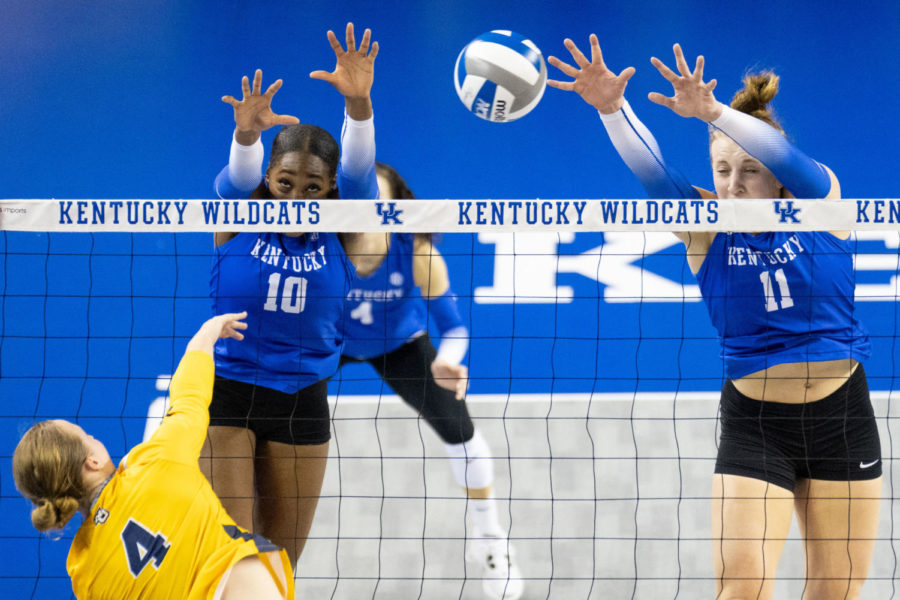 Kentucky volleyball’s season opener ended in a loss for the No. 11 Wildcats in five sets against Marquette on Friday.

The Golden Eagles’ 3-2 victory tied the all-time overall series at 3-3.

Kentucky dropped its first two sets of their season, though there were positives to take from the defeats.

Marquette started the match with an early lead that it maintained throughout the set.

Undeterred, Adanna Rollins impressed in her debut in blue as the Penn State transfer recorded nine kills in the first set and put on a two-point sequence that brought the crowd in Memorial Coliseum to their feet.

Rollins spiked down three points and followed with a block that cut Marquette’s lead down to one. Despite the ensuing ‘blue, white’ chant, the Golden Eagles went on to take the set 25-21.

Despite the first set defeat, head coach Craig Skinner was pleased with Rollins’ performance in her UK debut.

“I’m glad to see Adanna put the blue on and get after it like she did tonight,” he said. “[She gave] us opportunities to score.”

The second set would also go in Marquette’s favor despite several hustle plays from UK junior Reagan Rutherford, including one play where she stuck out her arm to keep the ball alive, which ultimately led to a point for UK.

Despite the effort, Marquette’s Yadhira Anchante had 22 assists while Aubrey Hamilton totaled 12 kills by the end of the second set to extend the Golden Eagle lead.

Down 2-0, Kentucky finally found its rhythm in the third set.

Erin Lamb and Elise Goetzinger contributed with two pivotal kills as Kentucky extended its early lead in the set, forcing the Golden Eagles to call a timeout.

After the break, Marquette would go on a quick rally, forcing the Wildcats to call a timeout of their own, now up 18-15 in the set.

With the crowd on their feet and Kentucky looking at its first set point of the season, the Cats were able to convert and take the third set 25-18.

UK remained hot in the fourth set and went on to even the match after Rollins’ 20th kill of the night tied the set at 7-7 and several plays later Emma Grome recorded her 44th assist on a scoring play that would put the Wildcats up 17-9.

The Wildcats then went on to cruise to a 25-16 victory in the fourth, sending the season opener into a deciding fifth set.

Down 2-1 early in the set, Kentucky rallied for three straight points to take a 4-2 lead as the crowd at Memorial got loud once again.

Marquette would eventually regain the lead, but Lamb’s back-to-back kills cut the visitors lead to two points before Rollins recorded yet another kill as UK found itself down by just one point late in the set.

Ultimately, it would not be enough as the Golden Eagles would go on and take the fifth set 15-12, winning the match 3-2 overall.

Kentucky returns to action next Sunday, Aug. 28, versus the University of Ohio, though looking ahead, the matches will only continue to get more difficult for the Wildcats as they play No. 1 Nebraska, No. 3 Wisconsin and No. 4 Louisville all within the month of September, though Skinner did not seem bothered by this.

“You can’t beat the best unless you play the best,” he said. “You’ve got to play a good schedule to get there. The next few weeks are going to be awesome for us.”

UK and Ohio are set to begin play at 4 p.m. EST, with the match also airing live on the SEC Network.