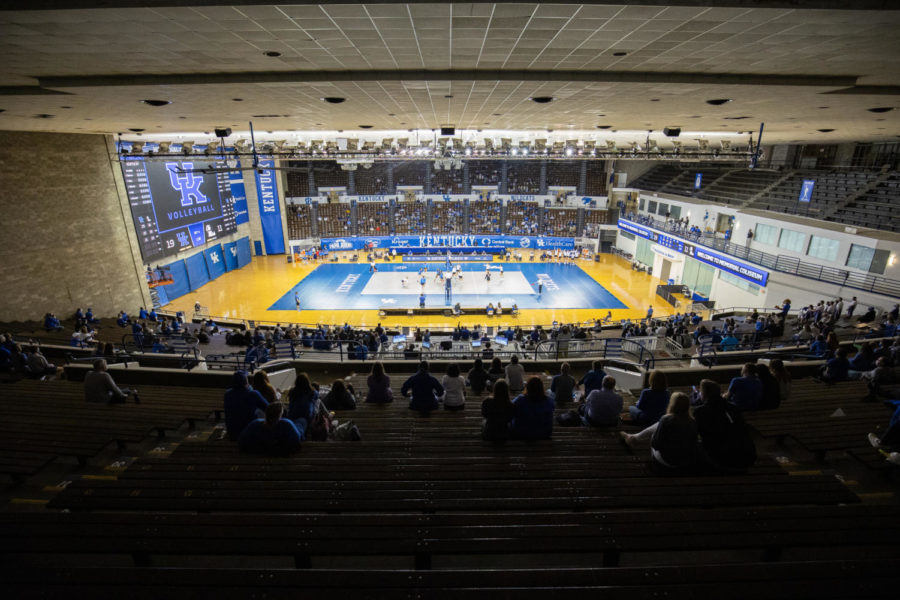 The Wildcats lead the Rebels in the fourth set of the UK vs. Ole Miss game on Saturday, March 13, 2021, at Memorial Coliseum in Lexington, Kentucky. UK won 3-1. Photo by Jack Weaver | Kentucky Kernel

In-house debate has sparked at the University of Kentucky after mens basketball coach John Calipari used a pregame press conference to compare the success of UK’s mens basketball and football programs.

UK football coach Mark Stoops took to Twitter to make his disdain with this sentiment known by highlighting the fact that UK football had four straight postseason wins — something the UK basketball team has been lacking as of late.

Stoops clarified at a later press conference he felt the need to defend the hard work his players had put into the football program, and he did not appreciate Calipari’s comments degrading UK’s football team.

“I don’t care about what anybody says about their program. That’s not my business, it’s not my lane,” Stoops said. “But when you start talking about our program and others that we compete against … I don’t do that. I stay in my lane. That’s in defense of my players, in defense of the work we’ve done. Believe me, we want to continue to push. But don’t demean or distract from the hard work and dedication and commitment that people have done to get to this point.”

This public interaction raised many questions for those who witnessed the verbal sparring match. UK basketball or UK football? Should UK provide the mens basketball team with a new practice facility? Is Calipari being greedy or an advocate for his players? Does Calipari really have the status to be docking other UK sports programs when he is the coach who now holds the title for largest monetary upset in the history of the NCAA Mens Basketball Tournament? Who is in the right?

But the most important question to arise from the situation has been overshadowed by the status of the fighters involved. Who actually cares?

Critique of UK facilities should hardly start at the multi-million dollar basketball accommodations when some university colleges, such as the College of Communication and Information, don’t even have claim to their own building.

Rather than using his status to give performative speeches about “caring” for the University of Kentucky, Calipari’s time would better be suited coaching his players to lead not another let down postseason performance.

Comparing UK basketball and UK football is like trying to choose between a cat and a dog — they’re both good in their own way.

Kentucky’s football program has gained traction through past seasons due to their underdog story line. Rising from the ashes of a subpar program, Stoops has brought out arguably one of the most consistent uphill climbs in the program’s history.

UK’s mens basketball program, on the other hand, has consistently been regarded as one of the best in the NCAA. After disappointing postseason performances in recent years, UK’s basketball program is fighting to keep its claim to fame.

Stoops’ comments were warranted to defend the integrity of his team. However, the tail end of conversations should have been conducted in private rather than creating a larger spectacle out of the feuding team heads.

While the two most supported athletics coaches on campus are arguing over whose is bigger, the women’s basketball team plays on a court that last underwent major renovations in 1990.

Memorial Coliseum has finally been queued for renovations in the near future but, retroactive scraps are hardly what the counterpart basketball program deserves.

In an interview, UK president Eli Capilouto told the Kernel that UK’s athletic program is fully self-sufficient, paying for all construction and repairs on the athletic facilities utilized by teams. Calipari’s complaints about and blaming the state of the basketball program’s practice facility on the university falls flat when all the information is available.

Capilouto said he holds pride for every discipline at UK, whether that be individual sports or academic disciplines.

“As a local editorial page recently reminded us, we are this commonwealth’s flagship university,” Capilouto said. “We are one of eight or nine universities in the country that has, on a contiguous campus, this broad array of disciplines. The depth and breadth of talent we have here bodes well for the education that students can receive here.”

Comparison of UK’s mens and womens basketball program prompted Capilouto to give a defensive response, saying “regardless of the sport we will work to provide a facility” to accommodate crowds of 16,000 people – IF the sport brings in that many spectators.

That is a whole lot of nothing. Capilouto’s failure to acknowledge the disparity between mens and womens facilities and support on UK’s campus is grossly insulting.

Support is a secular path. The more university support and exposure any campus team is given, the more successful that team will be and the more fan support will be shown. Bringing in a larger crowd to currently neglected sport events should not only fall on the shoulders of players and coaches but on the supporting university.

Stroking and soothing the egos of two successful sports millionaires should not be something the university has to divert resources to, especially when there is already a disparity between mens and womens sport support.

Calipari may have thrown the first punch, but Stoops did nothing to soften the blow. At the end of the day, neither of these teams would exist without the support of the university and its students.

Less interest should be shown in the spitting contest of two coaches than is shown in the academic well-being of UK’s students. So, who actually cares?