Humans of UK: Dr. Doug Boyd preserves the future of the past 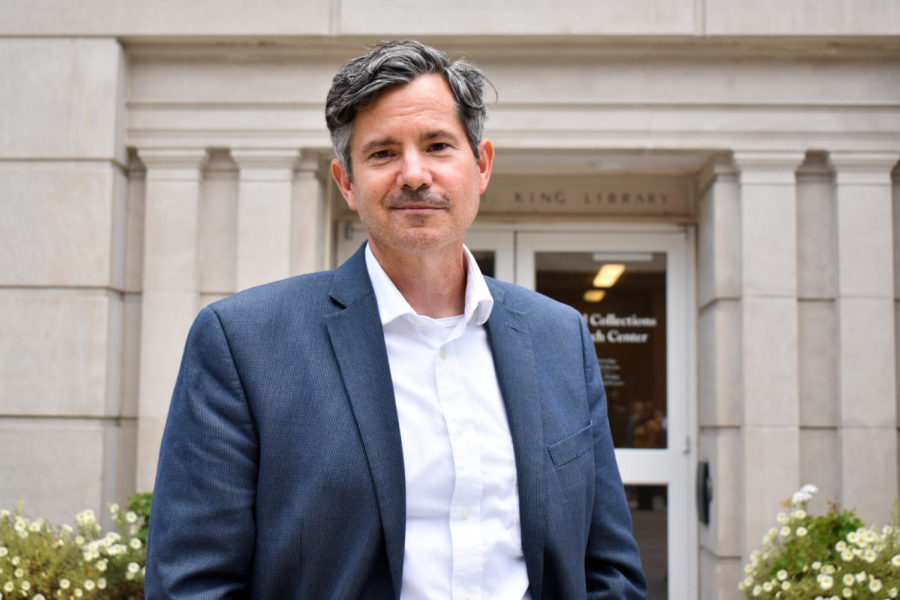 Director of the Louie B. Nunn Center for Oral History, Doug Boyd, poses for a portrait on Monday, Aug. 22, 2022, at the University of Kentucky in Lexington, Kentucky. Photo by Abbey Cutrer | Staff

Dr. Doug Boyd had seen pictures of flooding in Eastern Kentucky before he drove to Letcher County, but when he got there, Boyd said pictures didn’t do the situation justice.

“Seeing houses that were washed away, seeing foundations that once had houses, seeing school buses overturned in the creek … those sorts of scenes were really powerful,” Boyd said. “The damage and the destruction was pretty profound.”

Boyd, the director of the UK’s Louie B. Nunn Center for Oral History, traveled to Whitesburg, Kentucky, with other members of the Special Collections Research Center (SCRC), to assist in recovering records of Appalshop, a nonprofit organization that connects people to Appalachian culture through music and film.

The nonprofit has been in operation since 1969, and video and audio recordings produced through the organization were archived in Whitesburg – an archive that was then flooded through the end of July and beginning of August, putting the records in danger of destruction.

“Their archive is made up of film and video and audio recordings on formats like reel-to-reel, film and old videotape like VHS, but also back to something called U-matic videotape and beta videotape,” Boyd said. “Those are extremely fragile anyway, but submerge them in muddy water, and it becomes extremely fragile.”

Boyd and the other archivists transferred the material out of flooded vaults and into a refrigerated truck. From there, the records will be transferred to experts around the country who specialize in cleaning and restoring various forms of tape.

Appalshop, given its national impact, received offers of support from both inside and outside its community.

“People at the Smithsonian were reaching out to Appalshop. I mean, this is not just a Kentucky treasure [or] regional treasure. It really, truly is a national treasure, this little place in Whitesburg, Kentucky,” Boyd said. “The archivist was getting calls from people all over the place. It got to where they said, ‘Okay, look, everybody come on Tuesday, and we’ll help get everything out.’”

Boyd also stressed that this recovery effort was not focused on him, but a collaboration between the Lexington and Whitesburg community. He specifically cited Dierdre Scaggs, Megan Mummey, Carol Street, Ida Mangum and Kopana Terry of the SCLC, as well as Kathryn Engle of the Appalachian Center, as instrumental to UK’s contributions.

Additional help came from Boyd’s colleagues in Louisville, members of the Kentucky Historical Society and even people who had been involved in Appalshop from the very beginning.

“The guy standing behind me in line for a period of time was literally one of the founders of Appalshop back in [19]69 … The architect for the building was there rolling up his sleeves [and] helping out,” Boyd said. “It was a sad day, but it was also a great day to see everybody working together … There was a lot of teamwork and camaraderie and people who were working together towards a common goal, and that’s always beautiful when that occurs.”