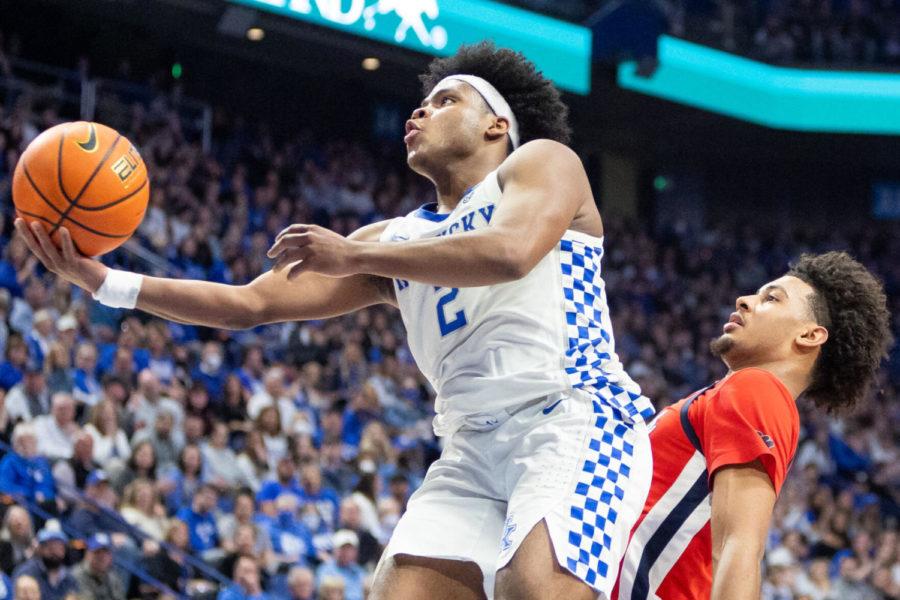 Kentucky mens basketball swept the Big Blue Bahamas pre-season event on Sunday with its 98-74 win over the Bahamas national team.

Though their toughest test of the tournament, Kentucky still managed to win by 24 points, finishing with an average margin of victory of 50 points.

In sweeping the 2022 edition of the event, UK improved to 13-1 in the Caribbean nation, 41-1 in all exhibitions under current head coach John Calipari.

Unlike the games prior, UK struggled to pull away in the first half, entering halftime with a one point lead after point guard Sahvir Wheeler made a layup as time expired.

The Wildcats shot just 37.5% from the field in the first half, 7% from beyond the arch, while the Bahamas national team connected on 60% of its shots.

Despite the downgrade in first half performance, associate coach Orlando Antigua cited the test as something that was needed for this team to develop, saying he was happy with how his team handled the adversity.

“It was the perfect combination of things: you had a quick turnaround from last night where you were shooting the lights out to a noon game against a veteran experienced team that was going to be very physical,” Antigua said. “The staff was expecting [the tough first half] and we wanted to see that. How are they going to respond? Are we going to splinter or are we going to come together? The guys came together.”

Antigua was quick to credit Wheeler for his role in getting the team back on track, saying the veteran point guard took a leadership role on the team and motivated them to be better.

“I gotta give Sahvir a lot of credit,” he said. “[He] not only stepped up on the court, but he stepped up vocally.”

Eventual tournament MVP Antonio Reeves echoed the sentiment, crediting Wheeler as the one who stepped up to lead the team back into the lead, also joking that not all of his words were family friendly.

“[The player’s voice who came out during that time of stress] was Sahvir,” Reeves said. “He was heated at the moment but you know he talked to his team. I don’t remember what exactly was said but it was about the defensive end.”

Wheeler’s words would have an impact as the second half of play, much like it was in the Carleton and Dominican Republic games, was better for Kentucky, with the Cats scoring 57 points and beating the Bahamas by 23 points in the half.

Jacob Toppin and Reeves both secured double-digit point totals in the second half alone, with the latter’s 16 enough to see him finish as the leading scorer across both teams by the end of the night with 22 total points.

Wheeler and Toppin both also reached the 20 points benchmark, finishing with 21 and 20 respectively.

Kentucky continued to show the depth of its roster, with its bench being mostly responsible for the win, out-scoring the Bahamas’s bench 33-17, with the 33 points accounting for just over one-third of UK’s total for the night.

Kentucky also continued to impress on defense by the end of the night despite Bahamas’s early scoring percentages, forcing 21 turnovers with 11 steals and seven blocks.

The shot defense also improved in the second half of play, with Bahamas shooting just 39% from the field as opposed to the 60% it hit in the first half, bringing its overall shooting percentage down to a manageable 48%.

UK also stepped up in the scoring percentage total, shooting 60% from beyond the arc and 66% from the field in the second half, seeming to have a full role reversal with its opponent.

Kentucky also continued to capitalize on its forced turnovers, having one more turnover than the Bahamas but scoring double the amount of points as its opponent off of turnovers.

With the conclusion of the Big Blue Bahamas pre-season tournament Kentucky will return home to Lexington to take what it learned from these four games and return to practice.

Kentucky’s season is scheduled to begin on Nov. 15, taking on Michigan State in the Champions Classic in Indianapolis.