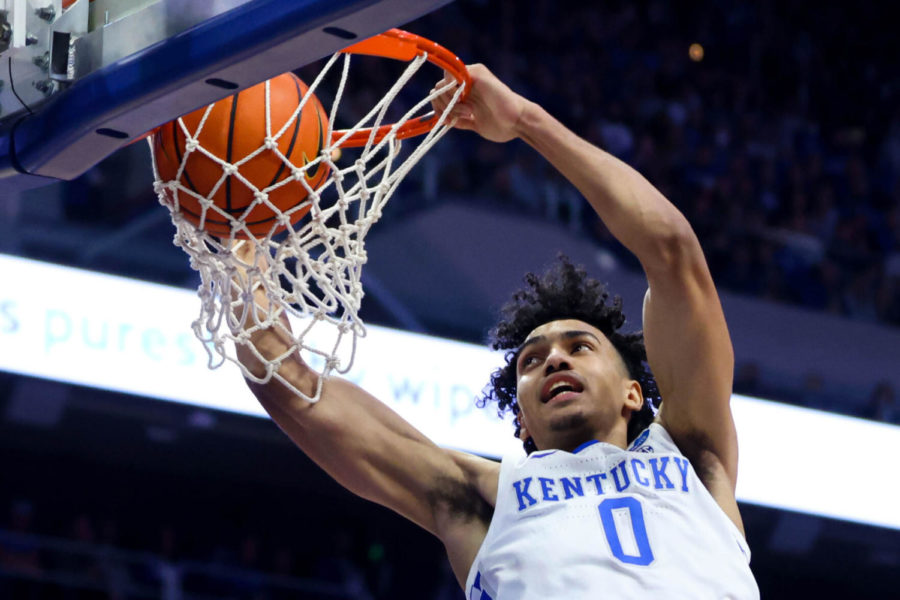 The lopsided victory marked the third consecutive 50-plus point victory for UK in the Bahamas, leading up to the climax against the Bahamas national team on Sunday.

Similar to Kentucky’s first game of the tour against the Dominican Republic national team, the matchup against Carleton University saw UK explode for a 60-plus point second half, with both Jacob Toppin and Antonio Reeves amassing double-digit point totals in the latter half alone.

Toppin ultimately led all scorers on the night with 27 points, shooting perfect from the field in the first half and finishing the game 11-14 from the field and 5-6 from beyond the arc.

Though Toppin stole the show, he wasn’t the only Wildcat to surpass 20 points for the first time this tournament, with Reeves also finishing with 23 points, also drilling five 3-pointers during the win.

Kentucky shot well as a team, finishing with a 58% shooting percentage and connecting on 50% of its shots from deep, a step up from the 33% it was shooting from beyond the arc at the close of the first half.

The win over Carleton may not have been as difficult of a test as some may have hoped, but it served to further reaffirm what assistant coach Chin Coleman said two days prior when speaking about the depth of the roster and number of scoring threats.

“We’ve got a lot of good guys at any given moment that can have a breakout game,” Coleman said on Thursday. “Everybody just has to be the best version of themselves, we don’t need anybody to go into the phone booth and put on a cape like ‘Superman, come save me!’ We’ve got enough.”

His words came to fruition against Carleton when stars from the prior matchups such as Oscar Tshiebwe, Chris Livingston and Damion Collins struggled to maintain the production level they had against both the Dominican Republic and Tec de Monterrey.

While the lopsided final scores and 100-plus point totals catch most of the attention when looking at games within the 2022 Big Blue Bahamas event, Kentucky has had another unsung hero during the tournament that continues to impress with every coming performance: the defense.

Against Carleton, Kentucky managed to hold its opposition to just 39% from the field, a number that was as low as 25% by the end of the first half, and 28% from beyond the arc, 9% in the first half.

The Wildcats also forced 28 turnovers, over double the amount they had themselves, going on to score a whopping 45 points off of Carleton turnovers, only giving up seven points off turnovers in return.

Kentucky also finished with double the amount of blocks Carleton had, halfway thanks to Collins, who out-rebounded the Ravens 42-31 and recorded 22 steals in the winning effort.

While not on the level of Kentucky, Carleton was no Tec de Monterrey either, currently standing as the reigning Canadian college basketball champions and having won 16 national titles, the most of any top division college in either Canada or the United States.

The 62-point loss goes down as the worst loss in Carleton history, also marking the first 40-plus point loss the team has suffered in 18 years.

Canadian college basketball is not far from the peak of collegiate hoops in North America, but overlooking Kentucky’s dominant victory over such an accomplished program diminishes what would otherwise be a very promising sign for the future season of UK basketball.

UK will have an opportunity to build off of such a victory Sunday afternoon, tipping off against the Bahamas national team in the final matchup of the 2022 Big Blue Bahamas tournament.

Kentucky, having scored over 100 points in all three contests so far, will have a real opportunity to surpass 400 total points after just four games this pre-season, a staggering offensive feat regardless of the competition.

Kentucky and the Bahamas national team are scheduled to tip-off at noon on Sunday, with the game airing live on the SEC Network.