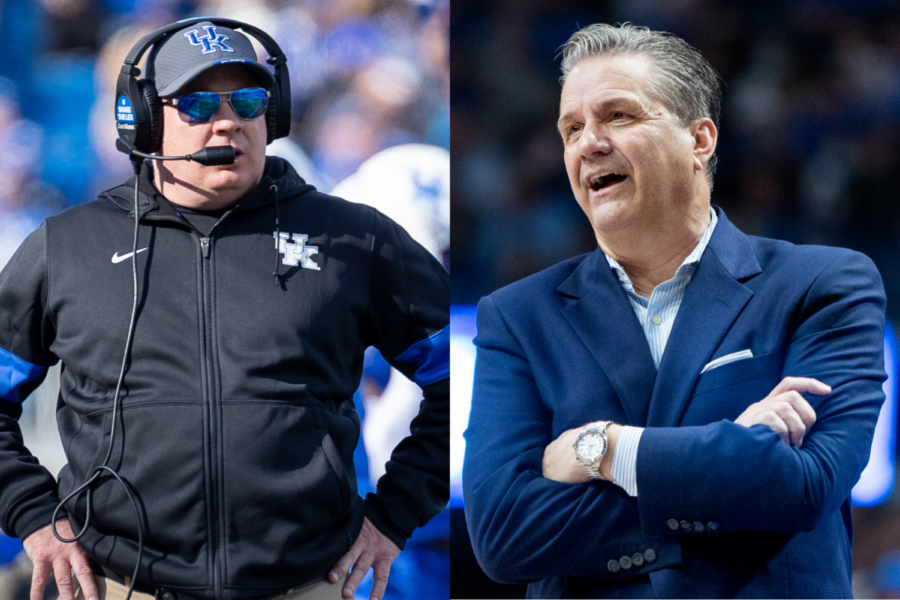 The University of Kentucky boasts one of the best athletics programs in the nation, having seven or more different teams ranked within top 25 polls in their respective sports in both the fall and spring semester last academic year.

That said, when it comes to school-defining programs, many successful teams such as rifle, mens soccer and swim and dive get tossed to the wayside, with the real debate lying solely on the shoulders of either the football or basketball programs (unless you’re Vanderbilt and baseball takes the cake).

Kentucky is no different, and the debate was firmly in favor of the basketball program for much of the school’s existence, despite it being the football team who broke the color barrier in the SEC in their respective sport back in the 60s.

Now, the football program has been reinvented under head coach Mark Stoops, who led the Wildcats to two Citrus Bowl victories in four years, with a Gator Bowl and Belk Bowl victory in between them.

Meanwhile, the basketball program is in a bit of a slump, missing the NCAA Tournament in 2021 for the first time since 2013, leaving fans without postseason basketball for two consecutive seasons after the 2020 event was canceled due to the onset of the COVID-19 pandemic.

To make matters worse, a revitalized Kentucky squad with championship ambitions that included the consensus national player of the year would go on to be stunned in the first round of the 2022 NCAA Tournament to No. 15 seed Saint Peter’s, with the loss going down as the largest wealth disparity upset in tournament history.

While the Peacocks would go on to make history being the first ever 15 seed to make the Elite Eight, for Kentucky fans this just meant it had now been seven years since head coach John Calipari had been able to get his team into the Final Four and, while Cal boasts the number of NBA talents he has coached in the bluegrass, he still only had one national championship to show for it.

Things would come to a head during the second day of the Big Blue Bahamas pre-season basketball tournament, one day after the Wildcats dismantled the Dominican Republic national team 108-56.

While Calipari was speaking about the necessity of a new practice facility for his team, similar to how Stoops had made getting a football-specific indoor practice facility a must during his contract negotiations, the football coach didn’t take too kindly to Cal’s words.

“Basketball school? I thought we competed in the SEC?” Stoops tweeted alongside the hashtag “#4straightpostseasonwin.”

Stoops would continue by retweeting tweets calling Cal’s comments “insulting” and pointing out the football program has been more successful in recent years, and quote-tweeting a video of Kroger Field erupting when Kentucky scored a touchdown from a blocked field goal over then No. 10 Florida with the caption reading, “BBN begs to differ! Don’t disrespect our great fans like that.”

Twitter became a battleground, with many fans agreeing with Cal’s sentiments based on historical precedent, whereas others were quick to agree with Stoops citing recent successful seasons and the complete 180 Stoops has accomplished, with the football program being 63-94 since the 2000 season under four different head coaches.

Also since the 2000 season, Kentucky has made a total five bowl games with three wins, two from the Music City Bowl and one Liberty Bowl, whereas Stoops has led his team to six straight bowls with four straight wins.

While the Twitter debates are likely just being used as outlets for fans to unleash pent up aggression on the basketball team’s recent struggles or celebrate the football team’s successes, it’s hard to see an emotionally driven debate between two SEC powers within their own sports as anything other than harmful towards the recruiting of both programs.

The need to tear the other program down as opposed to build both will ultimately be to the detriment of Kentucky as a whole as on-the-fence recruits will be flooded with Kentucky fans bashing one of their own teams.

If Kentucky fans can learn anything from Florida, and there’s not much to learn, look to the 2006 season in which the Gators hoisted both the NCAA Tournament championship as well as the BCS Championship in the same year.

Based on the historical success and current hype building around the basketball team and the current success of the football team, there’s no reason for Kentucky to distinguish itself as a football or a basketball school.

Kentucky can be successful in both, and currently speaking, despite the postseason struggles of the basketball team, UK is a brand that both football and basketball opponents cannot overlook on their schedule and that can only mean great things for both programs going forward.