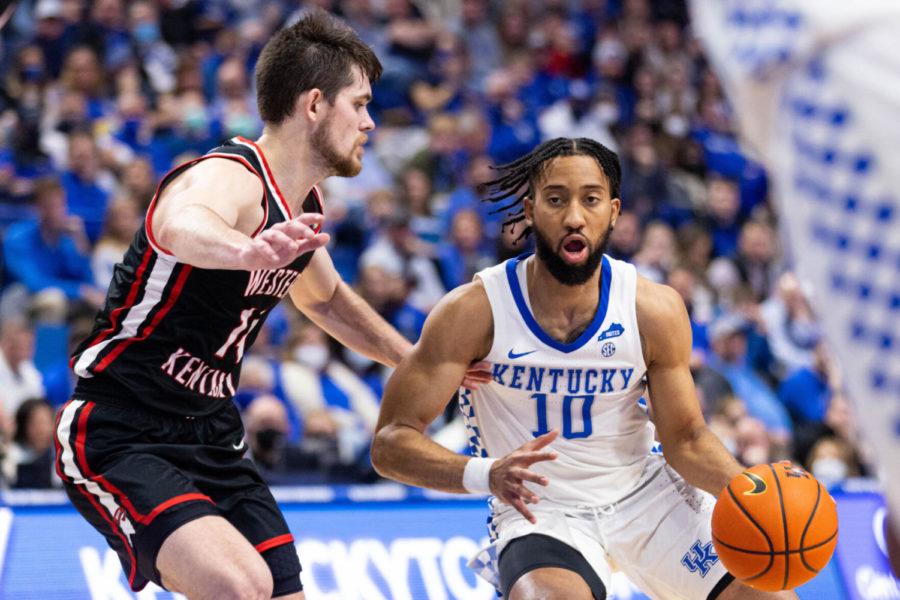 No. 12 Kentucky earned a gritty win over Texas A&M in College Station on Wednesday night, defeating the Aggies 64-58.

Kentucky erased an early 13-point A&M lead, its second largest deficit of the season. From start to finish, the raucous, sold-out Reed Arena witnessed a chippy contest between two of the top three teams in the SEC standings.

After beginning the year 0-3, Kentucky has now won back-to-back games away from Rupp Arena.

“I try to tell [the team] ‘you take pride in this and know [the fans] are coming to see you. Now, they may want to see you lose, but they want to watch you,” UK head coach John Calipari said.

Sahvir Wheeler led Kentucky with 12 points and four assists. While the point guard got his numbers in the scoring column, the sophomore committed a season-high eight turnovers.

As a team, Kentucky finished with 17 turnovers, also a season high.

Henry Coleman III led all scorers with 17 points. The big man connected on eight of 12 shots while also hauling in eight rebounds.

Despite 2-7 shooting, Davion Mintz was the only other Wildcat to reach double-figures, scoring 10 points, five of which came from the free throw line.

“[Mintz] was a difference maker in this game,” Calipari said.

Kentucky shot a season-low 36 percent from the field, making just 21 of 58 attempts. The Cats struggled from deep, going 4-18 from beyond the arch.

Kellan Grady, the SEC’s leading 3-point shooter, failed to get going all night for UK, finishing with five points on 2-10 points, including 1-9 shooting from deep.

While the Wildcats failed to get going from downtown, Texas A&M was even worse. The Aggies pulled 22 3-pointers on Wednesday night, with just one falling through the hoop.

From the get-go, it was a tall task for Kentucky.

Keion Brooks tried to get going early on, but failed to do so, shooting four of UK’s first nine shots, connecting on just one shot.

Texas A&M’s defense caused problems for Wheeler early, double-teaming the point guard past midcourt, forcing two turnovers. Wheeler would turn the ball over four times in the first half.

Kentucky began the game just 3-11, including a three-minute scoring drought.

Things went from bad to worse for UK, as TyTy Washington picked up two personal fouls in the first five minutes of the game, meaning a lengthy stretch on the bench was in store for the freshman out of Phoenix.

Daimion Collins would also see his number called for two fouls in the first half.

UK would go on multiple scoring droughts throughout the half, failing to fight past A&M’s tight-knit defense.

The Aggies’ 13-point lead came with under six minutes to play in the first half, following a 9-0 run, mixed with an over four-minute scoring drought for the Cats.

Kentucky began the game 0-9 from deep. Wheeler, an under 30 percent 3-point shooter, of all players would be the one who hit the first 3-pointer of the night for UK. Wheeler would connect on both of his long-ball attempts.

Calipari would break his two-foul bench rule for Washington, as the guard returned late in the first half, seeking some form of offense for Kentucky.

Despite a 33.3 percent shooting half that included just one 3-pointer and seven turnovers, Kentucky managed to enter the locker room with just a five-point deficit at 35-30.

10 rebounds from Oscar Tshiebwe and nine points from Wheeler salvaged an otherwise deplorable first half of basketball for Kentucky.

The second half would not begin much better, as yet another few-minute scoring drought plagued UK from making any serious maneuvers towards the lead.

Wheeler’s turnover issues persisted into the second half, while the Wildcat offense failed to find any rhythm all night.

“We’ve got to be better prepared for what we’re doing and talk them through,” Calipari said.

Grady would connect on his one-and-only 3-pointer early in the second half, but unlike what happened against LSU, the shots would not continue to fall for the Davidson transfer.

Luckily for UK, the Aggies weren’t able to get going on the offensive end either.

Kentucky would finally take its first lead of the game with under 10 minutes remaining, as Grady landed a layup for his only other make of the evening.

Down the stretch, the two teams would go back-and-forth in a true offensive struggle.

After the Grady layup, Mintz would knock down a 3-pointer, followed by two finishes from Jacob Toppin and Lance Ware.

Washington would finally make his presence felt late in the game, making two straight mid-range jumpers to give UK a four-point lead.

Kentucky went on a 5-7 stretch with less than six minutes to go, making shots when they desperately needed it.

“We learned a lot about ourselves and I’m just proud of this team that we stuck together because we’ve struggled a lot in the last four minutes,” Mintz said. “Just to know that we finally got one under our belts in crunch time. That’s big for our confidence going forward.”

A&M failed to find its clutch factor in Reed Arena, blanking on six of its final seven shots, not scoring the final 2:48 of the game.

Three UK free-throws at the end would ice the game for the Wildcats, helping them escape College Station with a crucial, momentum-building 64-58 win over a tough Texas A&M squad.

“When you shoot 38 percent and win, I love those games,” Calipari said. “I just absolutely love em’.”

Up next for the Wildcats is a daunting task down in the Heart of Dixie, as No. 2 Auburn will welcome UK to Auburn Arena for a clash between the top-two teams in the conference.