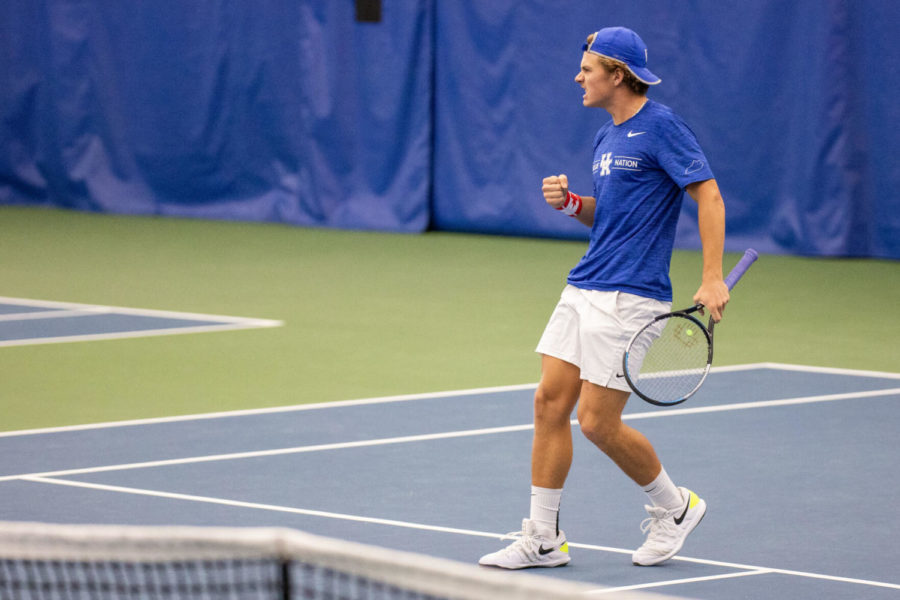 UK mens tennis took down the Louisville Cardinals on Friday afternoon inside the Hilary J. Boone Tennis Center by a score of 4-0. The win against rival UofL maintains UK’s unbeaten record, now at 3-0.

The last time these two teams met in Lexington in the regular season was in 2005, when the Cards came to the Boone undefeated.

No. 11 Kentucky started off the day earning the doubles point. The No. 34 duo of JJ Mercer and Joshua Lapadat made quick work of Sergio Hernandez and Alex Wesbrooks. Mercer and Lapadat grabbed an early 3-0 lead in the set, cruising to a 6-1 victory.

Kentucky’s Francois Musitelli and Yasha Zemel would then go on to beat Josh Howard-Tripp and Tin Chen. In an entertaining set of tennis that saw Louisville up 3-2 at one point, Musitelli and Zemel would rally behind commanding serves to win 6-4, giving UK the sole doubles point.

After earning the doubles point, the Wildcats would go on to sweep the singles action.

Singles play saw No. 45 Musitelli defeat Natan Rodrigues in straight sets. After being down 1-0 early, Musitelli found his groove and went on to put in an impressive performance in the first set, winning it 6-2. In a crazy second set which featured a few lead changes, Musitelli tied the set up at 6-6. He would go on to win the tiebreak earn Kentucky its first singles point by beating Rodrigues 6-2, 7-6(3).

Liam Draxl, last year’s Intercollegiate Tennis Association Player of the Year would earn the Wildcats their third point of the afternoon.

Draxl dropped the first set to Louisville’s Etienne Donnet. Using the crowd’s energy in the second set, Draxl would roar back and take the second set 6-3. Draxl’s enthusiasm only grew as the third set saw him serving with a crucial point for the Wildcats on the line. Draxl would win the three-set thriller by a score of 0-6, 6-3, 6-2.

Kentucky would earn its final point of the night via Millen Hurrion in another three-set matchup.

Hurrion won his first set in singles versus Howard-Tripp of Louisville. Hurrion was down 3-0 in the first set but came back to win it 6-4. The second set saw Howard-Tripp in control as he established a 5-1 lead and went on to win 6-2.

A decisive third set, where Hurrion began to pull away was enough for him to beat Howard-Tripp and win the final singles point of the night for the Wildcats, winning by a score of 6-4, 2-6, 6-2.

A 4-0 victory for Kentucky against in-state rivals Louisville puts the Wildcats at 3-0 on the young regular season.

Next up for the Wildcats is another in-state battle, this time against Northern Kentucky on Saturday, Jan. 22. Kentucky looks to stay perfect on the year and improve to 4-0.