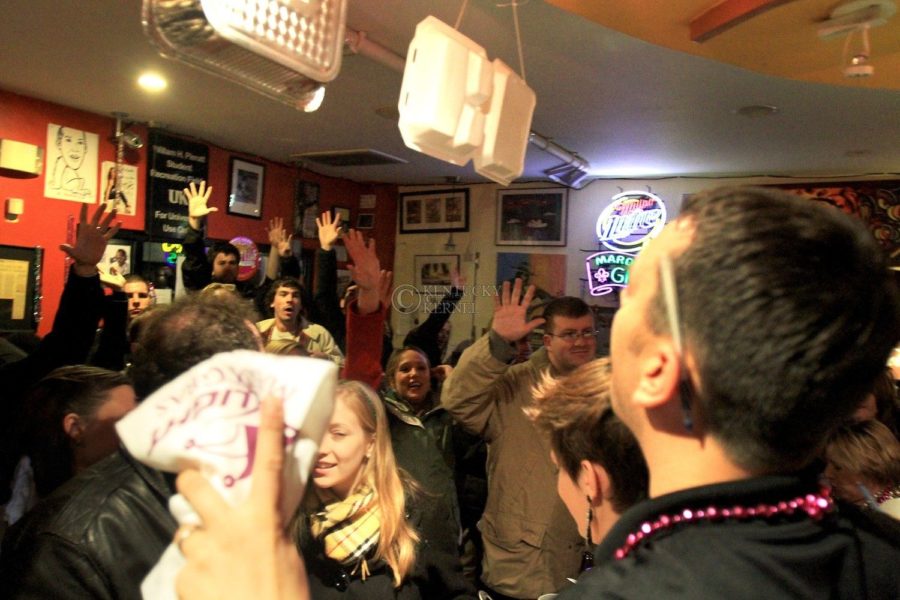 The only music playing was the screaming of Cajun orders combined with the commotion of voices. The energetic crowd dressed in a mix of casual wear, massive amounts of flashy beads or a feathery mask stood elbow-to-elbow to get their fill of more than 250 pounds of crawfish and other Cajun dishes.

Customers were greeted with $2 keg beer after finally squeezing through the jam-packed door. People like Dickey Lyons, former UK football player, could not resist the aroma of butter and beer that filled the restaurant.

“Bourbon and Toulouse is the best restaurant in Lexington, hands down,” he said.

As Lyons and two friends feasted on what looked like an entire weeks worth of crawfish, they enjoyed the calmer side of the event, eating their meal in Chevy Chase Inn next door. While consuming his crawfish at a steady pace, Lyons expressed his affection toward the local Cajun eatery.

“Walk into Bourbon and Toulouse and let the good times roll,”  Lyons said.

Other Lexington residents shared that sentiment to celebrate the day before Mardi Gras. Amid the beads and laughter, many customers could not get enough of the food. Patrick Brown, a geography senior, was in attendance for his  fifth year at the Fat Tuesday party.

In the heart of the busy night a loud crash came from the kitchen as a shelf holding kitchenware fell into the sink. But instead of panic, the party carried on. Customers’ applause filled the room, and despite the stress of the busy night, employee Benjamin Becker, known as  “Money Cat Maker” around the kitchen, did not seem to mind.

Becker did not miss a beat as he stood in the B&T crowd talking to his friends. Not sweating the wildness, Becker simply said, “Need to drink more bourbon.”

The environment may be crowded and fast at this time during the year, but the New Orleans mentality of the easy-going personalities are the main attraction at Bourbon and Toulouse. Lyons, a New Orleans native, would know. Lyons is usually in New Orleans during Fat Tuesday but said the atmosphere of B&T reminded him of home.

“If you are in Lexington (during Fat Tuesday) you need to be here,” Lyons said.