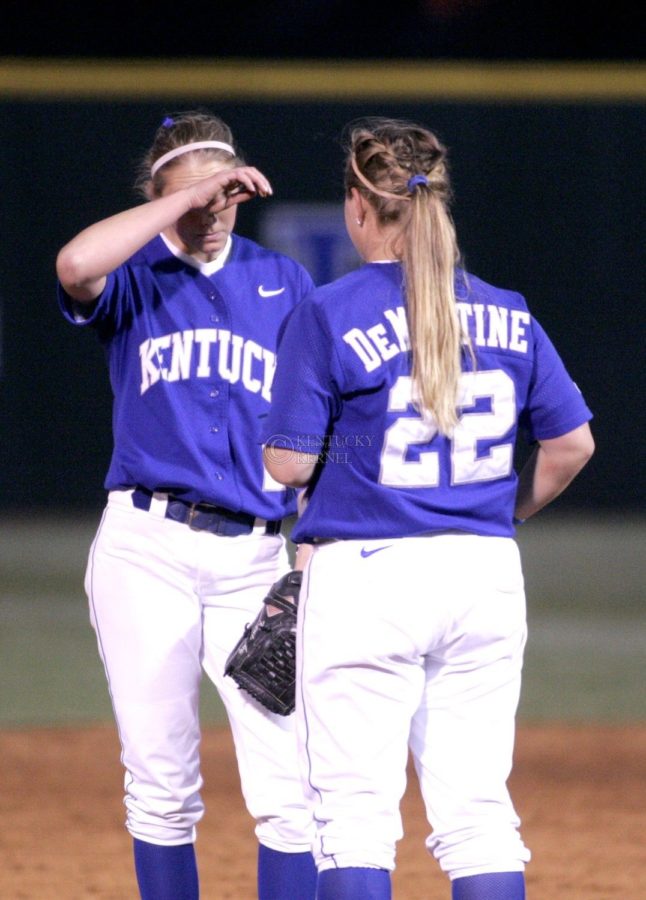 Rarely will a team allowing zero runs through seven innings lose a softball game, but such was the case for UK (14-6) on Wednesday night.

Though sophomore pitcher Chanda Bell gave up no runs and only three hits through seven innings, the Cats were unable to come up with a victory in extra innings against the No. 18 Louisville Cardinals. The 24th meeting between the bitter rivals ended in a 3-0 loss for UK after eight innings on a breezy night at the UK Softball Complex.

“Chanda threw really well throughout the whole game. Unfortunately, our offense couldn’t produce points,” junior catcher Megan Yocke said. “She kept us in the game long enough so that we had opportunities to win but we couldn’t take advantage of those situations.”

The Cats’ first obstacle came at the top of the fourth inning when Louisville was able to advance runners to first and third base without posting an out in the inning. However, UK was able to escape the Cardinals’ leadoff double by first baseman Alicja Wolny to keep the score knotted at zero.

The initial hit for the Cats came in the bottom of the fourth inning when Yocke landed a single in center field, but UK was unable to capitalize on the hit.

Louisville worked the pitch count early on Bell, forcing her to throw 48 pitches in the first two innings. But Bell found her stride against opposing batters and entered the seventh inning having thrown 111 pitches.

“The amount of pitches Chanda threw is typical for her,” UK head coach Rachel Lawson said. “Louisville is good hitting team so she prepared accordingly for this game.”

After holding the Cardinals scoreless through regulation, UK’s 2-3-4 hitters of Yocke, senior second baseman Natalie Smith and sophomore infielder Brittany Cervantes were due to bat at the bottom of the seventh. However, the trio was unable to come up with offense, sending the Cats to only their second extra innings game of the season.

Melissa Roth of the Cardinals hammered Bell’s pitch over the left field wall for a home run and the lead in the top of the eighth. Shortly after, first baseman Alicja Wolny sent another ball over the outfield wall. UK couldn’t answer.

“We are very resilient team and I expect us to bounce back quickly. I am not worried about our toughness,” Lawson said. “We are going to focus hard on our offense and continue to work on the things we have been doing well like pitching.”