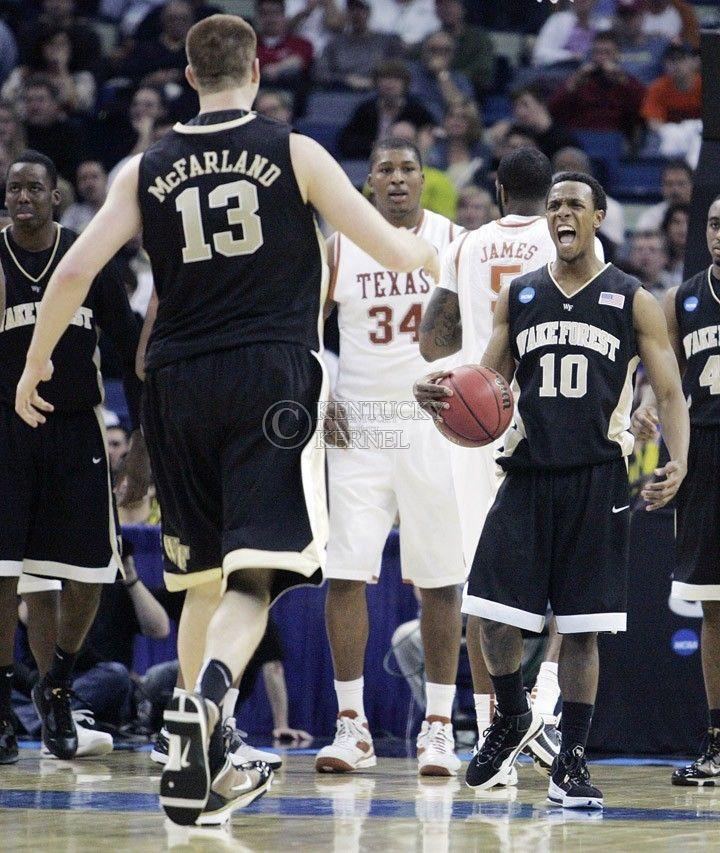 during the second half of UK's first round 100-71 win over East Tennessee State in the NCAA tournament at New Orleans Arena on Thursday, March 18, 2010. Photo by Britney McIntosh

NEW ORLEANS – Wake Forest is up next for the Cats, but when circling around the UK locker room Friday afternoon, much of the talk circled back to South Carolina.

The Gamecocks, led by senior guard Devan Downey and 44 team rebounds, handed UK their first loss of the season on Jan. 26. UK is hoping when they face Wake Forest on Saturday, it won’t be their last game of the season.

“They’re a little bit bigger than South Carolina, but as far as their guard play and their bigs, it’s South Carolina,” freshman forward Daniel Orton said.

Both South Carolina and Wake Forest are led by their senior point guards, Downey and Ishmael Smith, respectively. Both guards are undersized, but can get to the basket and get points on the board. While Downey is more of a scorer for the Gamecocks out of necessity, Smith has been able to find his big men and get everyone involved.

Smith, the Atlantic Coast Conference leader in minutes played per game, is second in the ACC in assists per game with six. Against Texas on Friday night, the 6-foot tall guard pulled down a dozen rebounds to go along with 19 points and seven assists.

“He’s not afraid to mix it up,” UK head coach John Calipari said of Smith. “He’s not afraid to stick his nose in there. And when he does get it, what’s he do? The minute he gets a defensive rebound he’s at half court in two seconds.”

Speed is something Smith should be used to. Former Wake Forest guard and current NBA All-star Chris Paul comes back to Winston Salem, N.C., to work with the Demon Deacons when he can. Smith said he takes that opportunity to pick Paul’s brain and work on his own game. Playing in the ACC, Smith has also had the opportunity to play with and against current NBA guards like Ty Lawson formerly of North Carolina and Jeff Teague, who led Wake Forest to a four-seed one year ago.

Calipari compared Smith to Derrick Rose and John Wall, and called him a “one-man break.” Unlike South Carolina, Wake Forest relies more on their physicality and for Smith to get those big men involved, like sophomore forward Al-Farouq Aminu.

“Al-Farouq Aminu is a beast on the boards,” freshman guard John Wall said. “He gets like five or six offensive rebounds a game and they can go deep into their bench with their big men so the key is going to be rebounding and just playing good defense.”

Against the big men of Texas, Aminu had his way, corralling 15 rebounds to go along with 20 points. Orton said he has some experience going against Aminu from the summer and said he really likes the sophomore’s game.

Against Texas it wasn’t just Aminu though, as the Demon Deacons as a team outrebounded Texas 59-34. If UK wants their season to continue, they said the battle on the boards will be a key.

“They go to the glass, they move their feet, they had over 18 offensive rebounds (against Texas), they move their feet and don’t accept being blocked out,” junior forward Patrick Patterson said. “We understand that they’re a tough, physical team that’s tall and rebounds the ball pretty well.”

Freshman forward DeMarcus Cousins said he was looking forward to the opportunity of possibly being played one-on-one for a change instead of getting the usual double and triple teams he’s grown accustomed to lately.

Wall said the game plan for the Cats remains the same despite Wake Forest’s size down low; find Cousins and Patterson.

“Why not? We still have DeMarcus Cousins and Patrick Patterson,” Wall said. “They’re some of the top big men in the country, so why not continue going to them? They’re going to play them one-on-one, see if they can stop them.”