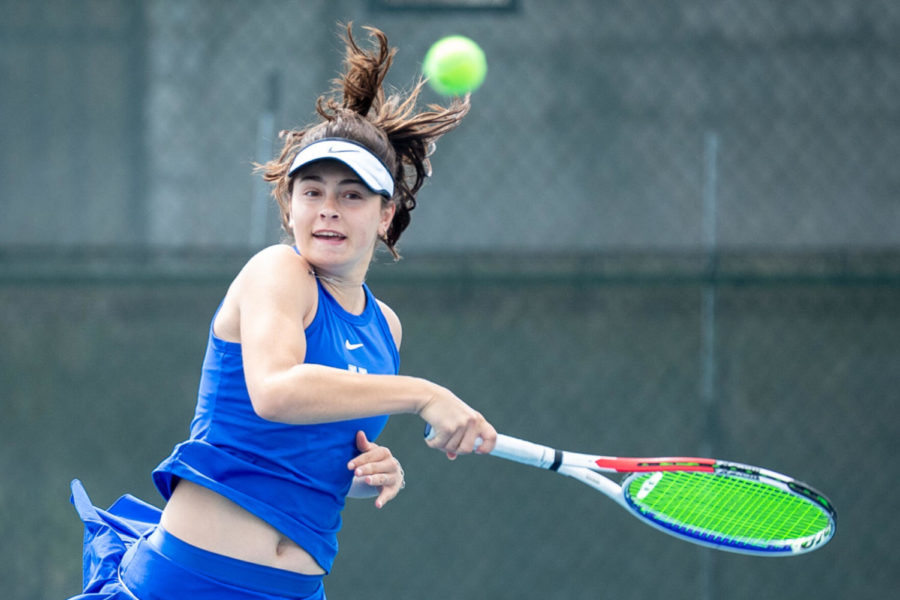 The University of Kentucky womens tennis team traveled to South Bend, Indiana on Friday, defeating the Notre Dame Fighting Irish 4-1 inside the Courtney Tennis Center to improve to 4-0 on the season.

Kentucky came into the match riding a hot streak, winning its last match against Miami (OH) 5-2 at home.

The match started off with doubles, where the Cats took care of business. Sophomore Fiona Arrese and her teammate, junior Florencia Urrutia won their match by a score of 6-1 over the Irish’s Maria Olivia Castedo and Yashna Yellayi.

As singles got underway, Arrese got on the board first, winning the first two sets of her match 6-3, 6-2 leaving no need for a third to be played. Soon after, Notre Dame’s Andreach would put the Irish on the board, defeating Girbau in two sets, 6-3, 6-3.

Carlota Molina and Yellayi were in a fierce battle on court three, with Yellaji trying to bounce back from an undesired first set, which she dropped 7-5. She did not get a different outcome in the second set, losing 6-4, giving the Cats their third point of the day, opening the door for an easy victory.

Freeman had a roaring first set, conquering Stevens by a score of 6-2. However, Stevens would step it up, rolling past Freeman in sets two and three winning by scores of 6-1, 6-2 to close it out for Kentucky. The final score would be Wildcats 4, Fighting Irish 1.

Next up for UK, the Cats will look to stay unbeaten as they host the Southeast Missouri State University Redhawks for a doubleheader on Sunday, Jan. 23 inside the Hilary J. Boone Tennis Center. The first match is set to start at 10 a.m.