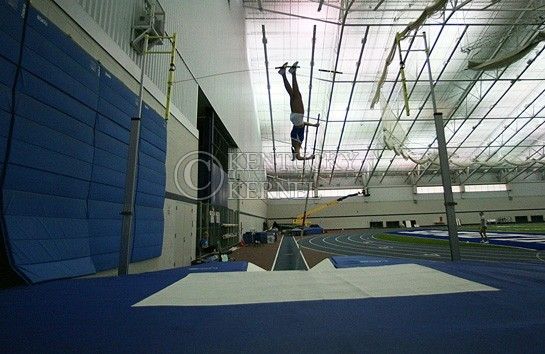 Samantha Stenzel is a UK student and pole vaulter for the UK Track and Field team. She practice on Friday, March 5, 2010.

“The record means a lot to me,” Stenzel said. “It shows how much I have improved since I got here last year. It is nice to see results from all my practice and hard work. It keeps me motivated.”

Stenzel has continued to improve throughout her sophomore campaign. Earlier this season, Stenzel set what was, at the time, a personal best with a height of 12 feet, 1 1/2 inches at the Kentucky Invitational meet on Jan. 15. She shattered that mark in Arkansas by a whopping 8 1/2 inches.

The previous women’s record at UK was 12 feet, 6 1/4 inches, set in 2008 by Mary Chris Durham. Stenzel broke the record at the Tyson Invitational, one of the biggest meets of UK’s season. Hosted by Southeastern Conference rival Arkansas on Feb. 12 and 13, the meet included 62 teams, 42 of which were collegiate. Amidst all the competition, Stenzel’s school record placed her fifth overall in Arkansas in the women’s pole vault.

Before soaring over the bar and into the record books last month, Stenzel was a high school student at Paul Laurence Dunbar High School in Lexington. She didn’t start pole vaulting until she was 15 years old. She had previously been a gymnast, but Stenzel made the transition from gymnastics to pole vaulting after an experience many hope to never go through.

“It’s because I broke my back,” Stenzel said. “When I broke it, everyone recommended that I try pole vaulting because gymnasts make good pole vaulters.”

Yet despite being just a sophomore at UK and managing practice with her studies as a biology major, she is not surprised by all of her success as just an underclassman.

“I guess (I’m surprised), but at the same time, I’ve been working for it,” Stenzel said.

As for the­­ track and field program at UK, Stenzel has high expectations for the team during the rest of this season. The SEC has six teams in the top 25, more than any other conference in the nation, but Stenzel is unfazed by the stiff competition.

“I expect us to be competitive with the rest of the SEC, and to qualify and place many of our athletes at nationals this season,” she said.

Stenzel also holds the UK freshman record in indoor and outdoor pole vault, but she is far from satisfied.

“I would like to continue to improve my record,” Stenzel said. “Hopefully I will be able to help bring UK vault into the limelight, and improve the track and field program as well.”