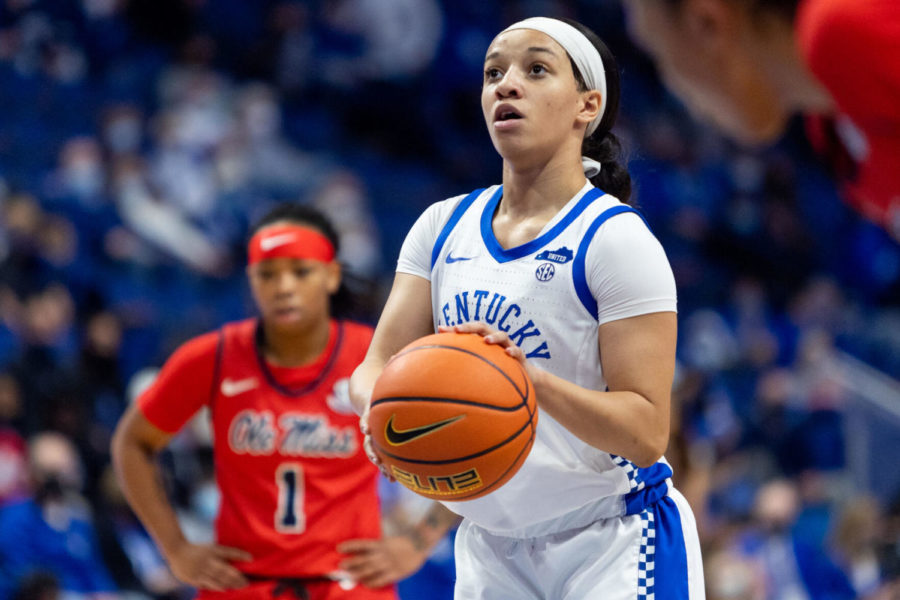 Kentucky womens basketball (9-7) snapped its four-game losing streak on Tuesday, defeating Auburn (8-10) 67-55 on the road in the Plains.

Rhyne Howard paced the Wildcats, scoring 29 points to go along with nine rebounds in a dominant performance against the Tigers.

Kentucky ended the game in emphatic fashion, finishing on a 17-2 run.

UK started the game on the right foot, jumping out to an early 16-5 lead. The Wildcats, in part to Rhyne Howard’s seven first-quarter points, led 20-11 after the first quarter.

Both teams traded buckets for a while, with neither team being able to extend or close the gap between them. At halftime, Auburn was able to get the deficit to six, making it a 29-23 game.

In the third quarter, Auburn was able to shrink the lead down to one as the Kentucky offense went cold, scoring only twelve points in the quarter. By the sound of the third buzzer, the Cats led 41-40.

Quarter four saw the Cats get met with a challenge as Auburn’s Honesty Scott-Grayson gave the Tigers their first lead of the game with a three pointer, 48-45.

Howard, the Cats leading scorer, was able to give Kentucky the lead quickly, as she scored 15 of her 29 points in the fourth quarter after Scott-Grayson’s three. The Tigers had no answer for Howard, as she rained 3-pointers and was able to get to the free throw line at ease.

The Wildcats never looked back and cruised the rest of the way for a 67-55 win.

“In the first quarter I thought we attacked in transition and we finished at the rim,” Kentucky head coach Kyra Elzy said. “We attacked the paint. We got open shots that we knocked down in the first quarter. And that was our goal, we needed to get off to a good start and we did that today.”

If the Wildcats did not get production from Howard, the final score may have swung in Auburn’s way. However, the All-American was not going to let that happen.

“Just stepping up and being a leader for my teammates,” Howard said. “(Auburn) ended up taking the lead and I was like ‘We’re not losing this game. We’ve worked so hard to get back in the win column. We’re going to come out on top.’”

It’s obvious that this year has been a struggle for Kentucky. Battling with injuries has been a big reason as to why they have dropped their last four games before tonight. However, after their first road win, Howard believes things are looking up for the Wildcats.

“It’s huge, I’d say we’re back to having a little bit of fun with the game,” Howard said. “Losing gets tiring and we were tired, very much tired.”

Kentucky will continue a three-game SEC road trip on Thursday, Jan. 27, at Vanderbilt at 8 P.M.