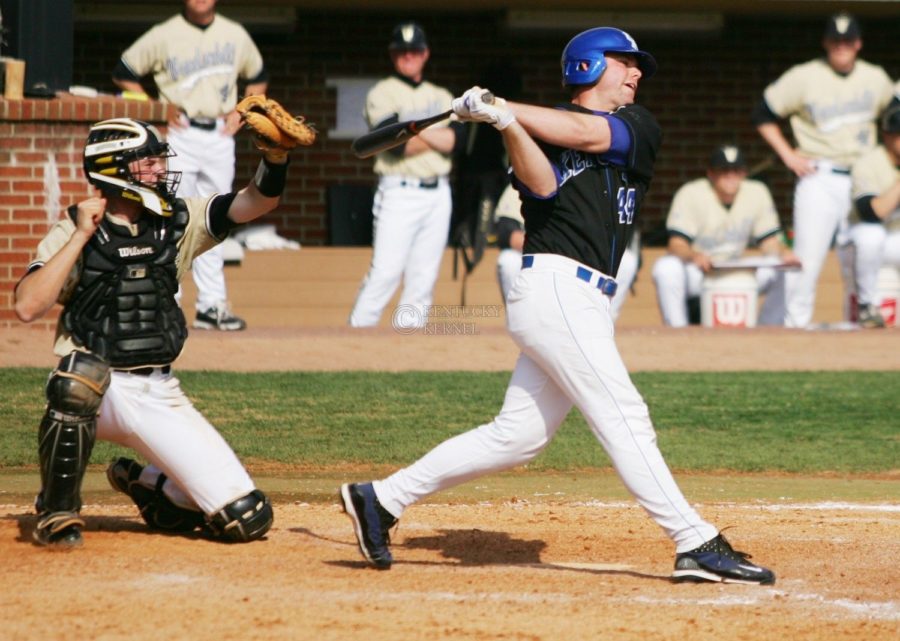 The weekends are different now.

Southeastern Conference play is warming up for UK (16-5, 1-2 SEC) as the Cats hit the road for the first time in conference play this weekend at Vanderbilt.

“It’s now turn up the dial, let’s go, game on, time to be competitive,” UK head coach Gary Henderson said. “Vanderbilt is a really talented team.  They’re like everybody else in our league.”

Vanderbilt is talented indeed — it ranks second in the league in team batting average and ranks first in team ERA.

But UK has a recent history of playing well against the Commodores, winning the series the past two years.

“We’ve had really good series with Vanderbilt since 2006,” Henderson said. “It’s been really competitive, close games. We can play well down (in Nashville).”

Vanderbilt finished one spot ahead of UK in the SEC standings last year, but the players don’t seem to have revenge, or any other extra incentive, on their minds.

“We’re just focused on going out there and playing our game,” sophomore outfielder Chad Wright said. “If we do that, we can come out with the series.”

This weekend will mark the second SEC series for the Cats after they dropped two games to Ole Miss last weekend. With one league series under their belts, the Cats feel they will be a little more accustomed to SEC baseball.

“What it helps is perspective and expectation,” Henderson said after playing one SEC series. “It helps the awareness that the game is a whole lot better on the weekend than it used to be. Last weekend (against Ole Miss) was kind of that ‘aha’ moment for several kids who weren’t here last year.”

One of those players is junior college transfer Taylor Black.

“You get more used to the pitching,” Black said. “It puts it in perspective when you see arms like that every weekend.”

And while UK has played tough games on the road, including a win against then-No. 12 Coastal Carolina early in the season, Black thinks traveling to play Vanderbilt will be different.

“I don’t think those earlier road trips can fully prepare you,” Black said. “It’s a different atmosphere. The competition is just better.”