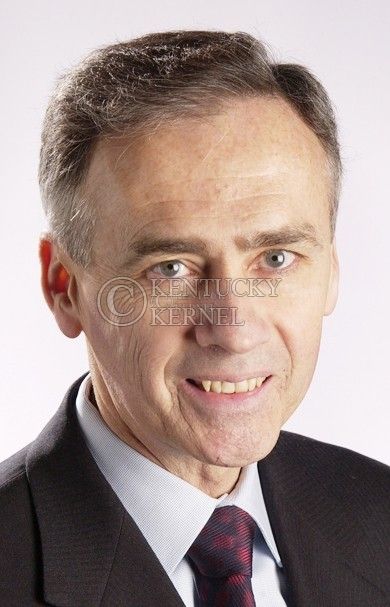 The brutalities of war and journalism have coincided with each other for generations, and on Thursday night, one journalist reflected on both issues.

Tom Curley, president and CEO of the Associated Press, came to UK on Thursday to discuss the many hardships journalists face on the battlefield.

Curley demonstrated his point with a slide show of intense battle moments that moved the audience. The photos showed that journalists face the same dangers as soldiers on the battlefield.

“He said a lot of things about the government and media and the interaction between the two,” journalism freshman Tara Bilby said. “I found that really interesting.”

Curley said the U.S. government made the war in Afghanistan sound like a complete success so that attention could be focused on Iraq. Unlike many other media outlets, the AP under Curley’s guidance has continued to focus on Afghanistan. The AP has been the only media outlet that has stayed in Afghanistan for the entirety of the war.

“Nearly 100 million weapons are bought (in Afghanistan) to use against U.S. troops,” Curley said.

Curley said many truths to war are covered up by government officials, who try not to let the whole truth out, but journalists have the task of reporting the truth to the American public.

“Now journalists are the targets on the battle field and the main reasons are for publicity and funding,” Curley said.

Curley has had reporters kidnapped in the field, and he continually emphasized that war journalism is journalism’s most dangerous field.

“His speech was really interesting and I enjoyed hearing about the troubles reporters have to go through to get their stories to the public,” integrated strategic communications freshman Michael Kania said.

Curley said journalists must be courteous to families whose family members have died in battle. He also said reporters should have no government interference, and everything that is published is done at there own discretion.

Curley said truth is not riskier or more elusive in today’s war journalism, because military members continually try to protect media members so the truth can continue to reach the public.

“Momentum is the biggest story line,” Curley said. “Just because you won a whole bunch of games doesn’t mean you’re going to get past the elite eight.”