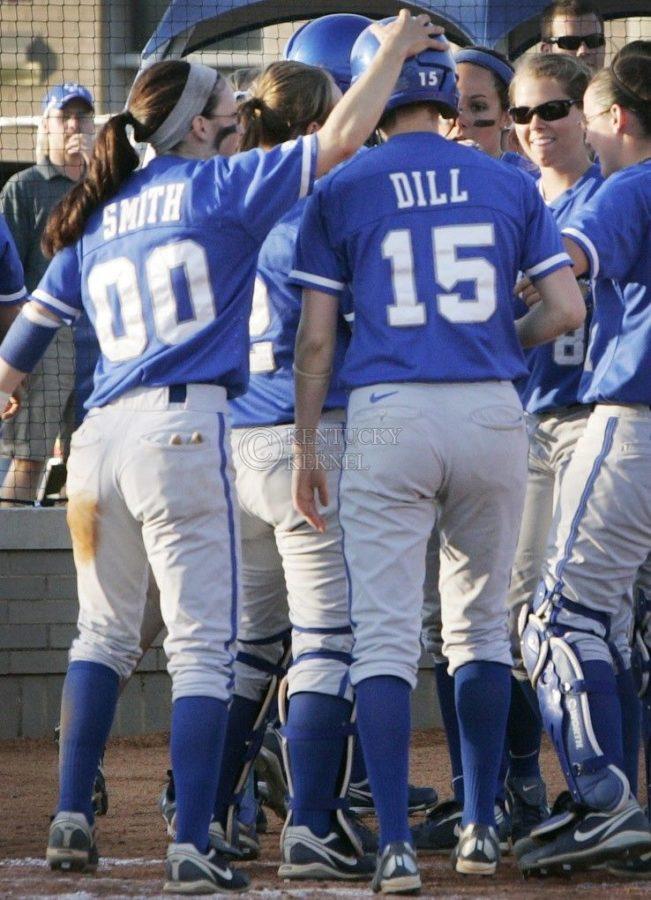 The UK softball team plays Western Kentucky University at Soccer and Softball Complex on Wednesday, April 14, 2010. Photo by Will Baldon

Though this weekend’s rain was enough to postpone the second game of UK’s final home series, it was not enough to put a damper on senior day for the five graduating Cats.

UK (29-21, 11-14 Southeastern Conference) played host to No. 12 Louisiana State (39-10, 17-5 SEC) in a three-game series. Saturday’s early game was called after five innings due to rain. The second game of the supposed doubleheader was pushed to an early Sunday start, forcing two games on the day.

UK’s runs came early, but not often. The Cats had opportunities to score additional runs but they were unable to capitalize on those chances. UK’s failure to produce with runners in scoring position was a trend that carried over to Sunday’s doubleheader, as it lost 9-3 in game one.

LSU built an 8-0 lead through five and a half innings before UK found its first offensive success in the bottom of the sixth inning. Junior catcher Megan Yocke led off with a solo home run before the Cats could mark three more hits and two additional runs. But LSU’s pitcher was able to escape the inning with runners stranded, as she did much of the game.

Despite UK leading off most innings with good production, it left 11 runners stranded on base.

“As a coach, there are better things I could have done to put runners in motion,” UK head coach Rachel Lawson said. “When they got the leads early in the game, it put us on our heels. We had to generate more hits than we wanted to. It just really took us out of our game plan.”

Sophomore Rachel Riley earned the loss in the pitching circle for UK, dropping her to 10-7 on the season.

Following the break in which five UK seniors were honored, the second game of the day kicked off. The five seniors, pitcher Amber Matousek, left fielder Jennifer Young, right fielder Destinee Mordecai, second baseman Natalie Smith and shortstop Molly Johnson, each started for the Cats in their final game at the UK Softball Complex.

The third game proved to be the closest of series, remaining tight all the way to the Cats’ half of the seventhinning. LSU was still able to come away with a 3-1 victory in front of the 760 fans, the second-most crowded game in UKhistory.

Mordecai posted UK’s only run with a home run over the left-field wall in the bottom of the fifth inning. Matousek received the pitching loss in game two, dropping her to 3-3.

“LSU is just a great team,” Lawson said. “They have a great pitching staff and they were able to keep us off balance. That trickled over to the other parts of our game, which allowed them to relax and string some things together. There hasn’t been another team that has been able to do that to us consistently all season.

“We are obviously disappointed with the weekend but we realize post-season play is still our main focus. We’re just going to get back to work on Tuesday and work on the things that we didn’t do well in this series.”