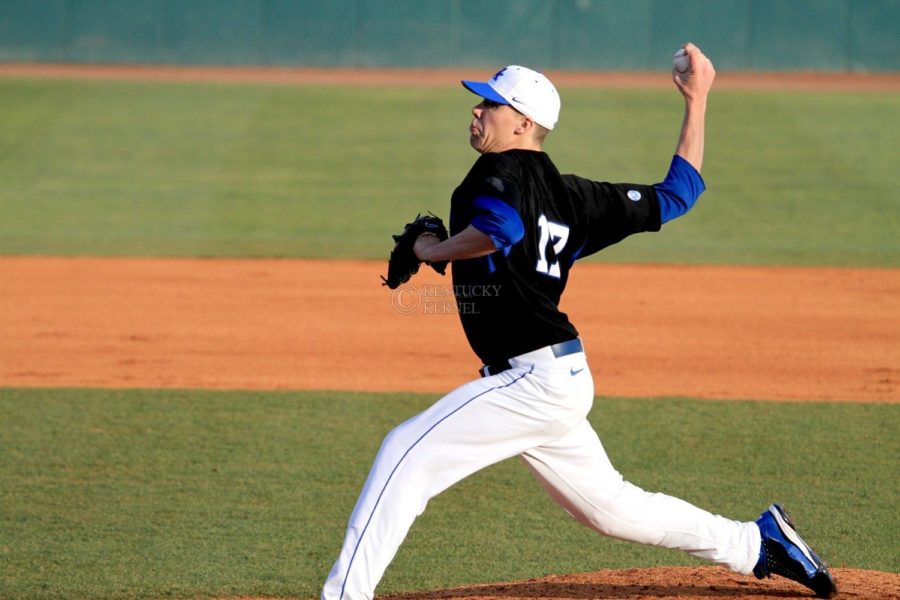 UK has already lost one starting pitcher this year. Now, temporarily at least, another pitcher is unavailable to take the mound.

Sophomore Alex Meyer was diagnosed with mononucleosis and is out for three to four weeks, UK head coach Gary Henderson announced last Wednesday.

“I feel really bad for Alex,” Henderson said in a news release. “He has really been making some good strides and is obviously getting better daily. This will only be a temporary setback for him.”

Meyer, who was unavailable for comment, is 4-2 in eight starts with a 7.30 ERA, which is slightly inflated by two outings where he gave up five or more runs but didn’t last more than two innings.  He leads the team and ranks fifth in the Southeastern Conference with 52 strikeouts in 40.2 innings pitched.

Meyer’s absence is still a big blow to UK, who also lost projected starter James Paxton before the season.  Now, the Cats will be sending at least two pitchers to the mound every SEC series who they wouldn’t have expected to before the season began.

In his last outing before being diagnosed with the illness, Meyer showed his potential dominance, shutting out Alabama through the first five innings.

Despite the loss of their usual Sunday starter, the Cats refuse to be beaten by adversity.

“Meyer’s out, but the whole team knows we’re not going to moan and say bad stuff,” second baseman Chris Bisson said. “We won’t say this isn’t fun because we don’t have our Sunday starter.”

UK is focusing on what it can gain rather than what it loses.

“What this will do is provide an opportunity for some of our guys to step up and fill a vital role on our club,” Henderson said in the news release.

Who will fill Meyer’s spot now becomes the obvious question.

On Sunday, UK turned to freshman Walter Wijas, who threw 3.1 innings and gave up just one run while retiring the first 10 batters he faced.

But while he filled in with a spot start this week, next week’s starter — and the three following that — have yet to be determined and may not be until any given Sunday morning, as was the case against Florida.

UK could pull from one of many weekday starters — Jordan Cooper, Sam Kidd, Kyle Jackson and Sean Bouthilette have all started at least one game — or it could cobble together a string of relievers as it did Sunday.  None of them have proven the ability to consistently go six or seven innings deep in a game, though.

“Sometimes kids surprise, but I’m not sure we have a guy with 18 outs (6 innings) in him right now,” Henderson said. “I think I’d rather just match it up and do the best we could.”

There’s also the issue of whether to save anybody for Sunday or to go all-out on Friday and Saturday to try and pick up the wins and see what situation presents itself Sunday.

“It’s going to be whatever happens,” said Henderson about whether Wijas was going to be the starter or if it would be a mix-and-match deal. “I don’t think at this point I would save anybody for Sunday. I think I try to win Friday and Saturday, do whatever we have to do, and then whatever we got left we do that.”

If that’s the case, UK will need Logan Darnell and Taylor Rogers, its Friday and Saturday starters, to assume a heavier workload to ease the strain on the bullpen, which will presumably be seeing more action in each series finale.

“We clearly have to be consistent with our starting pitching so our starters chew up at least six innings, especially with Alex out,” Henderson said. “Those two starting pitchers have got to pick up extra outs. We can’t afford to not have them get six or seven innings.”