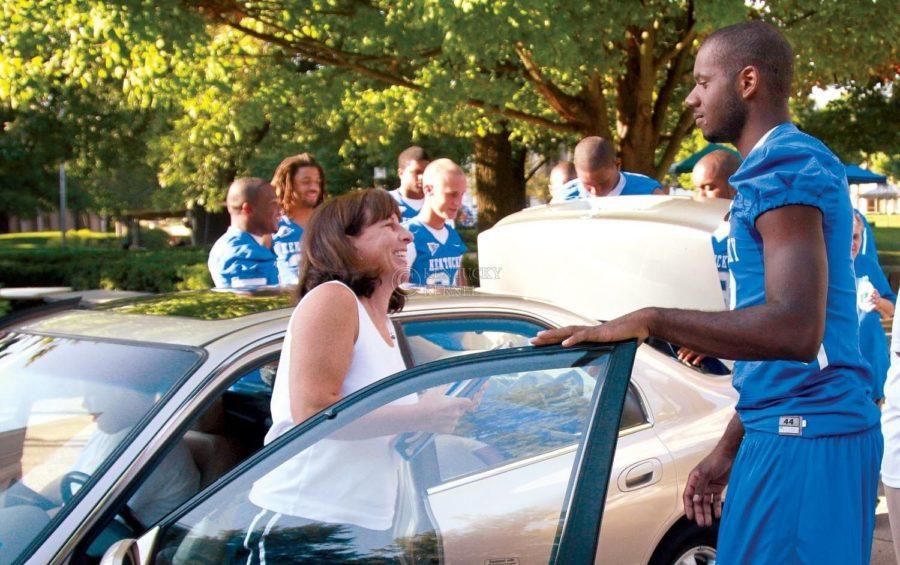 University of Kentucky students work to move into their new homes on campus, August 20, 2010.

Moving to college as a freshman can be intimidating. Add 105 of the biggest men on campus waiting at their dormitories, and the intimidation reaches new levels.

But that was exactly what the UK football team attempted to combat.

University of Kentucky football players assisted freshmen students and their parents moving in to their dormitories on August 20, as part of Operation Move-in, an attempt to bring athletes and their classmates together.

“I was really surprised to see them all out here,” chemistry freshman Will Edwards said. “I had no idea how I was going to get all my stuff in here.”

“It helps them get connected to the students,” Edwards said. “Since there is usually a disconnect between them and the rest of us.”

“I thought it was really nice of him,” Sterling said. “It showed me that UK really did have school spirit.”

Long after the football players returned to their daily training, other campus organizations worked tirelessly to assist the incoming freshmen class.

“It’s just a great way to welcome freshmen to the campus and let them know that we are like a community,” biology junior and member of the Baptist Campus Ministries Amanda Sutton said. “It’s just something our organization does every year.”

“I just remember the first day I moved in and how much help it was for me,” Sutton said.  “I just want to make sure it’s easy for them.”

The extra muscle also helped parents like Leslie Rafferty – Ferrell, whose daughter Megan is a freshman.

“It’s been very easy so far, the football players helped greatly,” Rafferty – Ferrell said.  “Once we got here, everything worked, but I’m a little anxious. I mean it’s hard letting go. She’s my oldest, so this is my first time.”

Bridget Armstrong made the seven-hour drive down from Chicago to UK with her son, Connor, a pre-business freshman. With another son at Northwestern University, her experience with UK has been surprisingly pleasant.

“I am amazed by the amount of information difference at UK versus Northwestern,” Armstrong said. “Even though [UK] is so big, it doesn’t feel that way. Everyone is very helpful.”