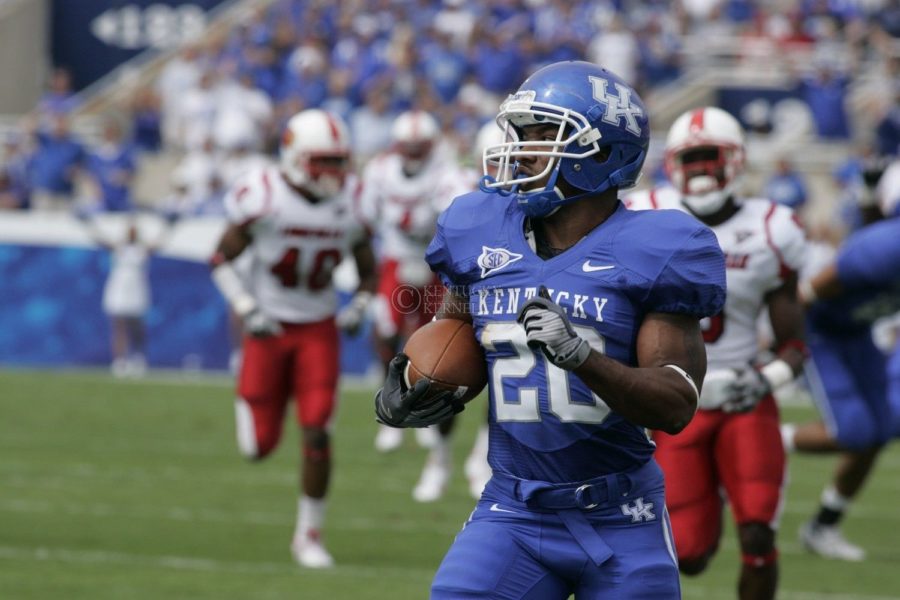 Junior tailback Derrick Locke scored on a 100 yard kickoff return in the first half. UK leads Louisville 17-10 early in the third quarter. Photo by Adam Wolffbrandt

It’s been nearly two decades since UK scheduled a marquee nonconference opponent in the regular season outside of geographic rivalries. But as fans grumble about hosting opponents like Western Kentucky, Akron and Charleston Southern this season, they’re not alone.

Several players said they’d like to see the Cats ante up against a top-flight opponent from a major conference.

“I’d never really thought about that,” senior linebacker Ronnie Sneed said. “We always talk about the bowl game, but putting somebody in the regular season … I think that’s something we should get going.”

The last time UK played a regular-season nonconference game against an opponent from a major conference other than Louisville or Indiana was 1990, when the Cats lost to North Carolina 16-13. The series with Indiana was discontinued in 2005. UK holds an all-time record of 17-18-1 against the Hoosiers.

To the players, especially those from out of state, a game against a major nonconference opponent could be a way to hold bragging rights over friends from their home towns. Others would like the chance to get revenge on a school after a perceived slight during recruiting.

Senior tailback Derrick Locke, a native of Hugo, Okla., would love to get a shot at Oklahoma. The Sooners only wanted Locke, one of UK’s top-10 all-time career rushers, as a defensive back.

“I would love to play Oklahoma just one time so I can show them what they thought they didn’t see in me,” Locke said. “I want to show them so they can regret it.”

Senior quarterback Mike Hartline, whose brother was a standout at Ohio State before going to the NFL, knows that a win over the Buckeyes would give him bragging rights over his friends and family in Canton, Ohio, for years to come. Even though he’d like a chance to play Ohio State, he’d still have some reservations: The Buckeyes are currently ranked No. 2 in both major polls.

“That wouldn’t necessarily be a dream come true, because they’d be a tough opponent,” Hartline said.

But plenty of factors go into determining the schedule.

Home games, even those against lower-level schools, generate revenue through ticket sales. Major nonconference games can sometimes mean a spot on national TV, but playing against stiffer competition can result in more injuries and wear and tear on top players. And of course, there’s always the risk that playing stiffer competition can wreck a team’s chances of making a bowl game.

Hartline said even though a game against a major conference opponent could help get fans “amped up” and give the program some national exposure, there’s also a downside to playing tough nonconference opponents.

“You see other teams in the SEC play BCS nonconference teams, and it’s very tough. If we get into scenarios of playing teams (other than Louisville), it could be fun, but at the same time it’s going to be difficult for us,” he said. “If they want to put us up to the challenge, I’m sure we’d be more than welcome to take it on.”

Sneed, from Tallahassee, Fla., would love a shot at all the major schools in Florida –  especially Florida State.

Sneed might want to play the Seminoles for personal reasons, but he knows how excited the fans would be about a big game against a nationally known opponent. That excitement could spill over and help the UK program gain traction and exposure. Besides, it’s just what the fans – and many of the players – are asking for.

“I think by doing stuff like that, it will get us out there more,” Sneed said. “Get us more notoriety, get us more respect throughout the whole nation. It would create more rivalries and just make the season more fun.”