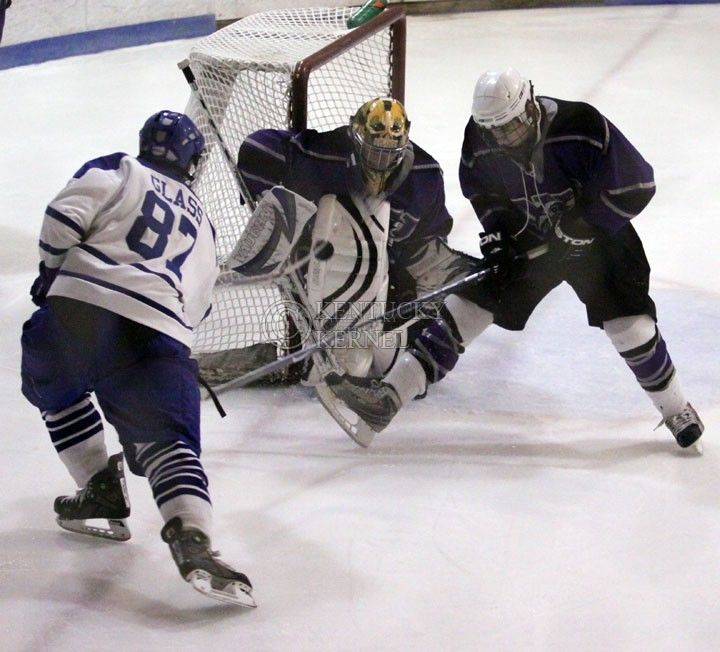 Freshman Billy Glass attempts for a goal during the hockey game Saturday night versus Niagra.

When it comes to ice hockey, the only time you usually hear of the number 14.5 is when you’re referring to the size of someone’s skates or gloves.

This past weekend, the number had a much different meaning — the average number of goals scored against Eastern Kentucky.

In the two games against the visiting Eastern Kentucky Colonels, UK scored 29 goals while only allowing one goal after beating EKU 14-1 on Friday night and 15-0 on Saturday night.

Fans in attendance never had the opportunity to run to the concession stand or restroom without missing the action, as a UK goal was scored on an average of every four minutes.  Nine different Cats scored Saturday night, including junior forward Billy Glass, who led the Cats with a “hat trick” on Saturday.

”You can’t ask for much more out of an opening weekend,” senior forward Taylor Vit said.  “We worked well together and are looking forward to this year.  [We] had a great weekend and that makes easy to be out there playing.”

Goals don’t come easy to any hockey team, even when the score is already in the double digits. It still takes the same amount of concentration and skill to get the puck past the goalie.

“To keep playing well, we have to work hard and get better every practice and game,” Vit said. “We have a lot of new guys so it will take time to come together, but that was a great start.”

“As a team we played well,” Vit said.  “We have been practicing very hard for weeks now and it was great to finally play some games.”

On the other side of the ice, the Cool Cats defense is producing just as much as the offense. EKU only took a shot at the UK goal eight times, with only one making it past goalie Derek Steinbrecher on a 5-3 EKU power play Friday night.

“The only score of the weekend came when it was 5 to 3 on the ice,” UK head coach Rob Docherty said.  “When you’re winning 13-0 the penalties seem like they won’t matter. In this case they did and we lost the shutout.”

Goalie Jim Borgaard kept his net empty Saturday night as the Cats held shut out for the first time this season.

“Jim played a good game.  It was a messy game with all the frustration, but he kept his concentration on the game,” Docherty said.

Docherty is pleased with what he sees on both sides of the ice from the Cool Cats so far.

“I like what I’m seeing out there,” Docherty said. “We spread the puck around.  All four of our lines got in and played some offense. Even our defense scored four goals.”

Given that nine different players have scored a goal in the first two games, other teams are beginning to notice the Cats quick striking offense.

“We need to take the positives out of this game and realize that the teams we face will get tougher from now on,” Docherty said.  “We can enjoy the win, but we have to be ready for next weekend’s opponent on the road at Kennesaw State.”