Exhibit to show history of horses 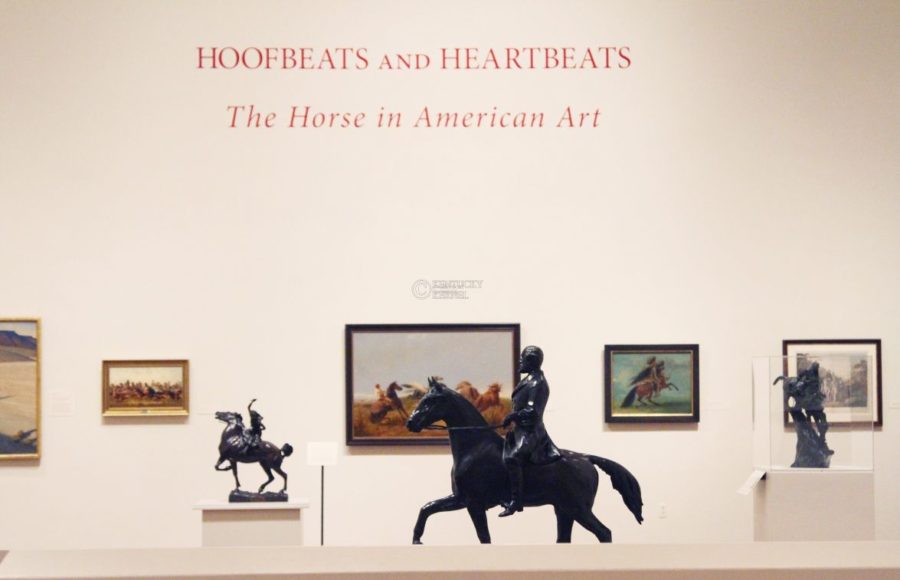 Hoofbeats and Heartbeats art exhibit at the UK art gallery in the Singletary Center. Photo by Scott Hannigan

In 11 days, Kentucky will absorb a giant surge of horse fans from across the globe, becoming the first state in the country to host the World Equestrian Games.

UK’s Art Museum is hosting its very own equine first — an artistic, historical study of horses and their role in America. After gathering paintings, prints, photos and sculptures from more than 30 national institutions and private collections, the museum is presenting “Hoofbeats & Heartbeats: The Horse in American Art.”

In grade school you might recall seeing images of George Washington in your history textbooks, often posed near a strong, white horse. This was a symbol of power in art passed down through the centuries.

“A white horse set the generals apart from the rest of the troops during the Revolutionary War through the Civil War,” Janie Welker, UK Art Museum curator of collections and exhibitions, said. “These are traditions of horses and poses based on older symbols and adapted for use in America.”

The museum has three rare and distinct Washington renderings in the show’s first section, which is about the horse as a symbol of power.  All  three have their own behind-the-scenes historical context.

In the second segment of the showcase, the horse is portrayed as a symbol of freedom, especially in the American West.

“These pieces show people living life in an untamed landscape … where there’s a vast, open country to expand to,” Welker said.

Everything from Teddy Roosevelt and his Rough Riders to the everyday lives of Native Americans can be seen in the exhibit. In a George Catlin piece, the rarely depicted Native American equine dressage is available in vibrant view. This is one of the few pieces completed before the Native Americans started to disappear from the American landscape.

The third section contains works related to the theme of “horse power,” or horses as working machines.  In one sculpture, man and horse become one as they work alongside each other, testing their respective strengths.

Welker said horses were once so abundant in New York City that multi-tier garages were built to accommodate them, much like the garages we park our cars in today. Horses were used for transportation, construction and delivery, said Welker, and there were too many to house in flat lots.

Horses used for the purpose of sport and pleasure can also be seen. Early racing champions like the famous “Lexington” are included, as well as pieces depicting people enjoying the pleasure of riding horses.

About 50 pieces were borrowed from all over the country to compose “Hoofbeats & Heartbeats,” one of the largest exhibitions to hold so many creations on loan at one time. The show took more than three years to organize and prepare.

“My favorite pieces are probably the William Herbert Dunton paintings,” Welker, who had never before seen Dunton’s work, said. “They have such a romantic feel. But this show has so much variety, there really is something for everyone.”

“Hoofbeats & Heartbeats” can be seen at the UK Art Museum through Nov. 21.