The history behind Big Blue Madness 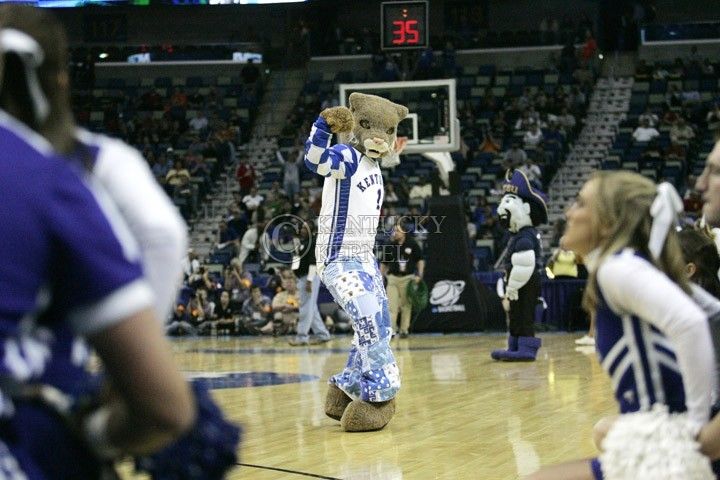 Wildcat does the John Wall dance during the first half of UK's first round 100-71 win over East Tennessee State in the NCAA tournament at New Orleans Arena on Thursday, March 18, 2010. Photo by Britney McIntosh

Like the tip-off signals the start of a basketball game, the UK basketball season officially begins with Big Blue Madness. Across the nation, “madness” can be found in many college arenas in mid-October, but UK has a history of putting on a memorable show. UK typically impresses its supporters with new players and dazzling spectacles. but Big Blue Madness didn’t always have the allure it currently does.

In 1982, Joe B. Hall was in search of a way to promote his team with some preseason excitement. His idea: to hold a practice open to the public at midnight the day of the first team practice. At 12:01 a.m., the “Midnight Special” became a reality as 8,500 spectators filed into Memorial Coliseum to get a first glimpse of their Cats. The 12,000-seat auditorium had thousands of vacant seats, though.

The practice kept a low profile, and many news outlets didn’t even cover the affair.

“To be honest, I don’t remember much about the first couple years of Big Blue Madness,” she said.

Despite its relatively small impact, Hall continued the tradition, which led to some of the most memorable moments in Madness history.

With the 29th year of Big Blue Madness approaching, fans continue to reminisce.

In 1994, then-UK head coach Rick Pitino arrived wearing leather and riding a Harley Davidson, to the tune of “Born to Be Wild.” The next year, UK players Walter McCarty and Tony Delk swung onto the court from ropes as “Cat-man and Robin.”

UK displayed another memorable moment in 2002 when “Mr. Wildcat” Bill Keightley leaped out of a cake to celebrate the Cats’ 100 years of basketball.

It wasn’t until recently the Cats kicked off their season in Rupp Arena. In 2005, Rupp Arena hosted Big Blue Madness for the first time, accommodating 23,174 spectators. Since then, the Cats haven’t looked back, coming far from its first “Midnight Special.”