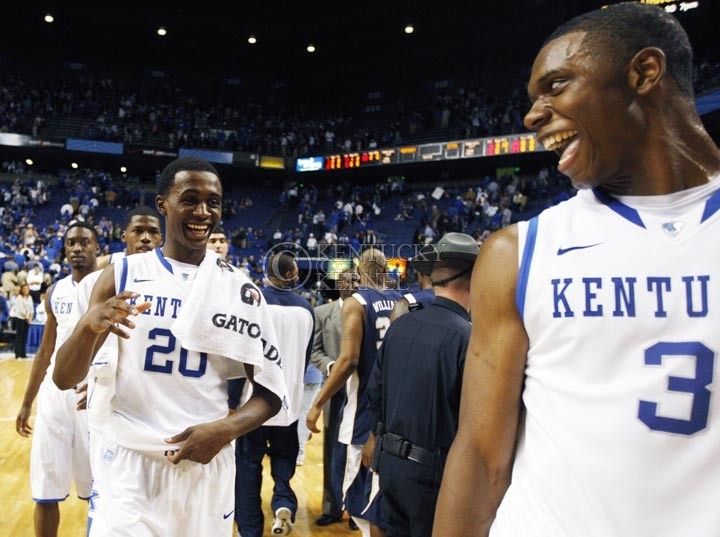 Terrence Jones laughs with Doron Lamb after the second half of UK's win over ETSU at Rupp Arena on Friday Nov. 12 , 2010. Photo by Britney McIntosh

The start of the season included a lot of 3-pointers and a lot more Terrence Jones.

UK beat East Tennessee State 88-65 in the regular season opener, burying them behind 13-of-26 shooting from 3-point range and a double-double from Jones.

Jones scored 12 straight points during a 16-0 run early in the second half that gave UK a 68-42 lead. He began the second half on a tear, with a dunk, two jumpers, an and-one layup and a 3-pointer. The run sealed the game, as ETSU didn’t close within 17 points the rest of the way.

He finished with 25 points and 12 rebounds, making him the first UK player to start his career with a double-double since Jules Camara did it in 1998.

“He has to be a monster down there like he was tonight,” Brandon Knight said. “Have the intensity he had tonight.”

Jones alternated between being a forward and center for most of the game, as he has most of the year, depending on what lineup was being used at any given point.

“It’s the same offense, so I don’t really even notice (what position I’m at),” Jones said. “It’s comfortable. It’s how I play, and I like to play like that.”

A cascade of 3-pointers contributed to the victory, as UK took advantage of open looks created by ETSU’s leaky zone defense. Knight made 4-of-7 and finished with 17 points and five assists. Doron Lamb, who started the game on the bench, made 3-of-5 and finished with 20 points.

“They were wide open, and it just came from everybody moving the ball and being unselfish,” Jones said.

Neither Knight nor Lamb showed any hesitation in shooting from 3-point range, and multiple times they put up shots from well behind the arc.

“They found each other, made the extra pass, got it in the middle,” Calipari said. “The other thing is that every guy out there can make a three. Now you play zone at your own peril.”

“I think we’re a pretty good shooting team,” Knight said. “Just the fact that we had so many open looks. They gave us a lot of open looks when they played zone tonight.”

The game was a rematch of last year’s matchup in the first round of the NCAA Tournament, although this year’s cast of Cats was vastly different, both in personnel and in terms of what stage of the season UK was in.

But the freshmen held their own. The Jones, Knight and Lamb scored 62 of the 88 points on the night.

“The freshmen showed that everyone could play,” Jones said. “We showed how tough we are and we can play at both end of the floor.”

Opening the season against a tournament team provided UK a better opportunity at gauging their progress after exhibition games against less-than-stellar opponents.

“I told them that this is a good team that’s going to win their league,” Calipari said. “It’s a good win for us.”