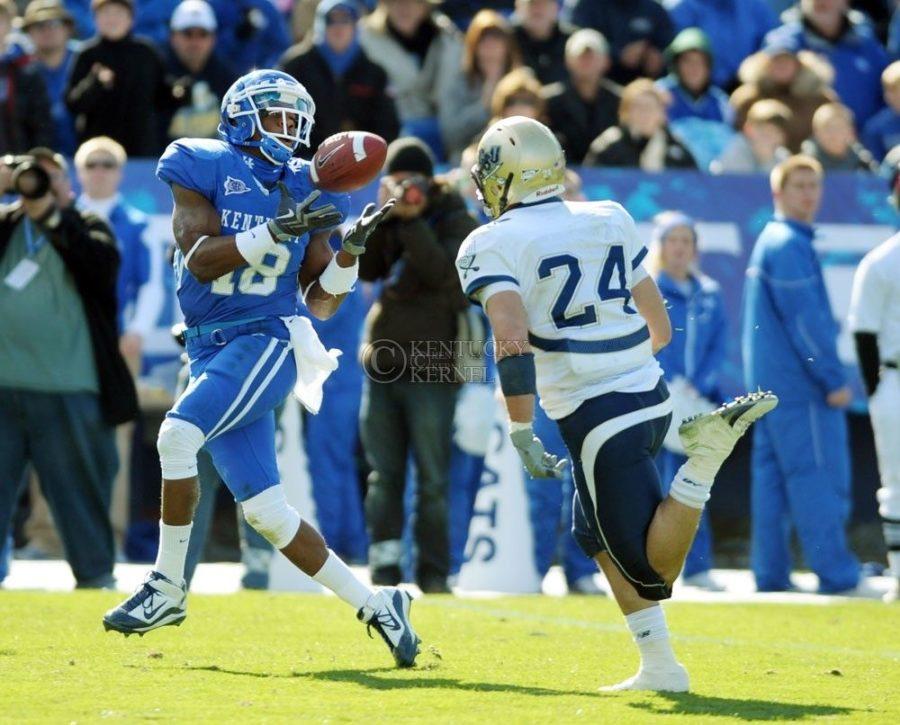 A raucous senior day crowd of 816 enjoyed a close game as UK freshman forward Brendan Murphy netted the game-winning goal in the 87th minute to propel UK to a three seed in the C-USA tournament.

“(Murphy) is a special kid,” UK head coach Ian Collins said. “But everybody today saw Brendan Murphy and his goal was unbelievable.”

Murphy seized possession of a loose ball and weaved in and out from Gamecock defenders. Murphy used a soft, precise shot to beat USC goalie Jimmy Maurer.

“The ball popped out, I ran towards the goal and finished it,” Murphy said.

Unlike most games this season, UK scored the first goal in the match, a controversial goal seconds before halftime.

UK junior defender Brad Walker was in the right place following a dual assist from sophomore midfielder Matt Lodge and sophomore defender Jordan Rose. Lodge placed a free kick in the USC box, Rose controlled the ball briefly before giving it a subtle flick to Walker and he fired it past Maurer.

“Jordan’s flick on was terrific and Brad got himself in the right spot, that’s what we have been trying to do all year on set pieces,” Collins said.

After the play, the line judge had his flag up, as whispers floated around the UK Soccer Complex, many inquiring as to whether a Cat was offside, a penalty that would have removed the goal. The referees met at midfield for a couple of minutes and came to the decision there was no offside’s, but the line judge was letting the center referee know a yellow card needed to be assessed to USC’s Blake Brettschneider after the play.

USC protested the call heading into halftime, but the call stood.

It only took the Gamecocks two minutes to even the match in the second half. Brettschneider shot a ball that deflected off UK’s Cameron Wilder and slipped past UK goalkeeper Tyler Beadle.

After that goal, UK controlled the match.

“I thought we fell asleep at the beginning of the second half but the way we fought back was unbelievable,” Collins said. “We dominated the last 25 minutes and I thought we were going to score three or four but it took a little bit of magic to score.”

UK’s win today moved it into the No. 3 seed, which will allow it to play the last seed in the tournament in the first round. UK plays six-seeded Tulsa, a team UK previously beat 2-1 on the road, Wednesday.

“To finish third in this league, that has five legitimate top-25 teams and finish in front of Tulsa who at one time was No .2 in the country, it says a lot about our resolve,” Collins said.